Activists protest against the production of herbicides and GMO (genetically modified organisms) food products outside Monsanto headquarters during its annual shareholders meeting in Creve Coeur, Missouri, January 30, 2015. (Reuters/Kate Munsch)
Download video (21.45 MB)
6.6K769
Tags
Food, GMO, Health, Monsanto, Protest, Rory Suchet, USA
Hundreds of thousands of demonstrators in 428 cities are expected to turn out this weekend to protest agribusiness giant Monsanto. The third annual 'March Against Monsanto' seeks to highlight the company's part in control of the food supply.
The worldwide protest scheduled for May 23 is a continuation of growing awareness and opposition to industrial agriculture's increasing consolidation of farming resources and methods, according to organizers.
In 2013, the first March Against Monsanto garnered more than 2 million protesters in 436 cities across the world, according to a previous report by RT. Similar numbers were reported for last year's demonstrations.
Monsanto's track record has been scrutinized ever since it aided US warfare during the Vietnam war. Agent Orange was manufactured for the US Department of Defense primarily by Monsanto Corporation, the use of which is estimated to have killed and maimed around 400,000 while causing birth defects for 500,000 children.
Scientific studies have linked the chemicals in Monsanto's biocides to Parkinson's disease, Alzheimer’s disease, autism, and cancer.
"People are fed up. We should break up Monsanto," Adam Eidinger of Occupy Monsanto told RT. "Monsanto is a monopoly, and it's acting like one. It's basically controlling 90 percent of the seed market in the United States. We wouldn't let one cell phone company control 90 percent of the cell phones. But for some reason we let food be controlled."

As the most powerful multinational biotech corporation today, Monsanto has drawn the ire of those within the movement for its firm grip on the global food chain. The company's control and advancement of genetically modified organism (GMO) seeds is of prime concern.
"In polls conducted by the New York Times, Washington Post, Consumer Reports, and many others, over 90% of respondents were in support of national GMO labeling – an initiative that has been defeated time and time again at the state level thanks to heavy spending by Monsanto-backed lobbying groups," wrote March Against Monsanto in a news release. 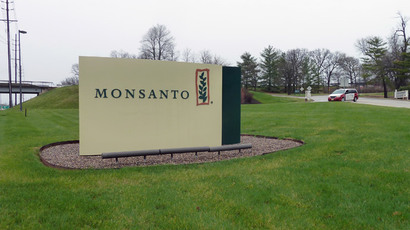 Monsanto gets approval for new GMO corn, soybeans designed for potent new biocide
Amid a wave of concern over genetically engineered foods sweeping through the US and around the world, major agribusiness and biotechnology conglomerates like Monsanto have spent immense amounts of cash to cloud the ‘right-to-know’ movement in the US.
According to the Center for Food Safety, dozens of US states have in recent years considered labeling legislation and ballot initiatives while a handful have passed laws mandating GMO transparency. Vermont’s governor signed the nation’s first clean GMO-labeling requirement into law in 2014, to take effect in 2016, but a coalition of biotech firms filed a lawsuit to prevent that from happening. Other states have passed labeling laws, but with strings attached.
To counter this movement, powerful farming and biotechnology interest groups have joined forces under the name "Coalition for Safe Affordable Food" to push a federal voluntary labeling standard for food made with GMOs, which would preempt state laws.
The Safe and Accurate Food Labeling Act of 2015 -- called the “Denying Americans the Right-to-Know Act” by opponents -- was introduced by Republican Rep. Mike Pompeo, an ally of Charles and David Koch, heads of the powerful multinational corporation Koch Industries. The bill has yet to leave the committee level, as of May 22. 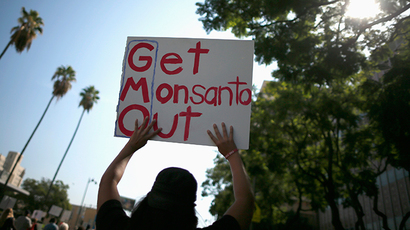 Monsanto agrochemicals cause genetic damage in soybean workers – study
Congressional supporters of an involuntary federal labeling standard have responded with the Genetically Engineered Food Right-to-Know Act, reintroduced in Congress in February.
The claim by biotech companies that GMOs are key to feeding the world's growing population has been heavily contested. A recent report found that GMO "seed companies' investment in improving yields in already high-yielding areas does little to improve food security; it mainly helps line the pockets of seed and chemical companies, large-scale growers and producers of corn ethanol."
GMO crops and ingredients have been consumed in the US for more than two decades. Large amounts of corn, soybeans, and canola produced in the US are genetically engineered. As much as 75 percent of processed food made in the US contains GMO ingredients.
GMO seeds have caused use of glyphosate, the leading ingredient in the company's Roundup biocide, to increase immensely since the 1990s, according to US Geological Survey data.

The World Health Organization's International Agency for Research on Cancer announced in May that Roundup, the most used herbicide in the world, is a "probable carcinogen."
"There's no question that March Against Monsanto is the most powerful grassroots initiative we have in the fight to reclaim our food supply from the GMO seed juggernaut known as the Monsanto Company," said Anthony Gucciardi, a March Against Monsanto speaker.
"With the new admission by the World Health Organization that Monsanto's best-selling herbicide Roundup is causing cancer worldwide, now is the most important time to join the movement and take a stand."

Posted by talesfromtheconspiratum on May 25, 2015
Posted in: Activism, Alternative media, Alternative medicine, Autism, Conspiracy theory, Corporate psychopathology, Corporatocracy, Corruption, Crimes against humanity, Criminology, Genetic engineering, Genetically modified foods, Gluten, Glyphosate, Health, ljf, Media, Medicine, Political science, Politics, Toxicology, Trans-Pacific Partnership (TPP), Video. 3 Comments
Say no to MonSatan!  Boycott its products, tar and feather their executives, and target their shareholders, as these greedy bastards are as guilty as the Monsanto board of directors.
And don’t forget the politicians who do the bidding of these vile creatures, they should have reserved and privilege status when the time comes for prison sentences.

Half the children born in 2025 will suffer from autism.
MIT Doctor Stephanie Seneff.

NaturalNews.com
May 24, 2015
by Mike Adams, the Health Ranger
The March Against Monsanto exploded across the planet today as protesters took to the streets in 38 countries and 428 cities to protest the world’s most evil corporation: Monsanto. ([url=https://twitter.com/intent/tweet?original_referer=http%3A%2F%2Fwww.naturalnews.com%2F049833_March_Against_Monsanto_citizen_protests_glyphosate_toxicity.html&text=%23MarchAgainstMonsanto explodes globally. World citizens stage massive protests across 428 cities&tw_p=tweetbutton&url=http%3A%2F%2Fwww.naturalnews.com%2F049833_March_Against_Monsanto_citizen_protests_glyphosate_toxicity.html&via=HealthRanger]Tweet this story #MarchAgainstMonsanto[/url])
Protesters from New York, London, Berlin, Paris and even across South America, Asia and India rallied against the toxic agricultural practices of Monsanto, a corporation whose business model depends on poisoning the citizens of the planet, destroying the agricultural ecosystem, monopolizing the seed supply and hiring online character assassins to attack anyone who opposes its agenda.
Protesters worldwide took to the streets today to demand GMO labeling and bans on Roundup (glyphosate), the toxic herbicide chemical that even the World Health Organization recently linked to cancer. “We need to stop feeding humanity such a vile toxin,” said one protester.
Watch the protest compilation video from RT here: (see more pictures below)

Mainstream media totally compromised, refuses to cover massive global uprising against Monsanto
As expected, virtually the entire “sellout” mainstream media refused to cover the event, pretending that the citizens of the world aren’t rising up against an enormous corporate evil that threatens the future of our planet.
The Associated Press ran a story mentioning local protests in Hawaii but refused to print the words “March Against Monsanto” or to even mention that these protests were taking place in over 400 cities across the globe.
Nearly the entire western media has been infiltrated and corrupted by Monsanto, including the once-respected magazine National Geographic which now functions as the propaganda arm for the life-destroying biotech industry. National Geographic’s magazines are now filled with multi-page ads for Big Pharma and Big Biotech, while its editors ludicrously attempt to paint scientists and citizens who have concerns about GMOs as tin foil hat-wearing lunatics.
Once-celebrated newspapers like the Washington Post have also been entirely overrun by Monsanto infiltration and disinformation. The paper’s science editors function as nothing more than Monsanto puppets and propaganda mouthpieces, pushing biotech talking points as if they were scientific fact while utterly ignoring the realities of cancer-causing glyphosate, seed supply monopolization, genetic pollution and Monsanto’s lawsuit attacks on farmers.
Today, only the Independent Media covers the truth about Monsanto, GMOs and glyphosate. Every mainstream media news source has sold out humanity to pure evil.
Here are some of the photos from RT’s March Against Monsanto video:

New emphasis on glyphosate (Roundup)
This year’s marches featured increased emphasis on the toxicity of Roundup (glyphosate), Monsanto’s weed killer chemical that’s sprayed liberally on crops.
Glyphosate has been linked to cancer by the World Health Organization, and researchers around the world believe glyphosate is linked to increased risks of cancer tumors in humans and animals that consume GMO crops.
This photo from the Seralini study shows how glyphosate and GMOs caused massive, fatal tumors in laboratory rats:

Learn more about glyphosate toxicity and the dangers of GMOs at these important websites:
http://www.gmoseralini.org/en/
http://www.gmoevidence.com/
http://gmojudycarman.org/
Glyphosate is also now strongly suspected of contributing to the autism epidemic. Dr. Stephanie Seneff from the Massachusetts Institute of Technology (MIT) is now warning that if the chemical poisoning of our world isn’t stopped, nearly half of all children born in the United States by the year 2025 will be autistic.
Watch this video from Next News Network for more details:

Natural News has been key in exposing Hillary Clinton’s deep ties to Monsanto. Now known as the “Bride of Frankenfood,” Hillary Clinton is a pro-Monsanto operative who hired a top Monsanto lobbyist to help run her campaign.
She also represented Monsanto as a lawyer with her now-infamous Rose Law Firm in Arkansas. Clinton is so pro-Monsanto and pro-GMO that she even spoke on behalf of the Biotechnology Industry Organization.
If Hillary Clinton becomes President, Monsanto will occupy the White House. This is why it’s absolutely crucial that the Democratic party find someone else to win the primary who isn’t a Monsanto puppet.

If Hillary Clinton becomes president, you can expect the full Monsanto agenda to be aggressively pushed as national policy:
• A nationwide federal ban on GMO labeling.
• Immediate USDA approval of all experimental GMO crops.
• Extreme, politically motivated attacks against all anti-GMO activists, scientists and journalists.
• Huge increases in taxpayer-funded subsidies for farmers who grow GMO crops.
• Aggressive corporate imperialism push to overturn bans on glyphosate and GMOs by other nations.
• Possibly even attempts by the FDA to outlaw non-GMO Project Verified labels in the same way they attacked hormone-free labels for cow’s milk.
Make no mistake: A vote for Hillary is a vote for Monsanto.
Spread the word
#MarchAgainstMonsanto
#ClintonMonsanto2016