Sowing the GMO Seeds of Depopulation 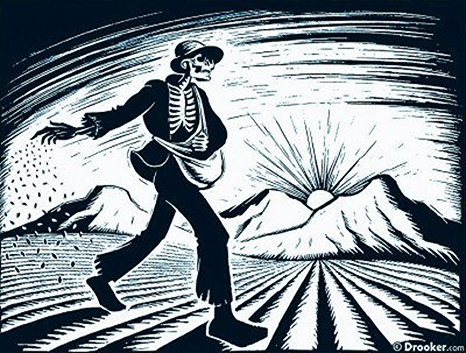 By Colin Todhunter
If physical violence is to be used only as a final resort, a dominant class must seek to gain people’s consent if it is to govern and control a population. It must attempt to legitimize its position in the eyes of the ruled over by achieving a kind of ‘consented coercion’ that disguises the true fist of power. This can be achieved by many means and over the years commentators from Gramsci to Althusser and Chomsky have described how it may be done.
However, one of the most basic and arguably effective forms of control is eugenics/ depopulation, a philosophy that includes reducing the reproductive capacity of the ‘less desirable’ sections of a population.
There is a growing fear that eugenics is being used to get rid of sections of the world population that are ‘surplus to requirements’. And it is a legitimate fear, not least because there is a sordid history of forced/covert sterilizations carried out on those deemed ‘undesirable’ or ‘surplus to requirements’, which reflects the concerns of eugenicists who have operated at the highest levels of policy making. From early 20th century ‘philanthropists’ and the Nazis to the nascent genetics movement and rich elites, by one means or another ridding the planet of the great unwanted masses has always been fairly high on the ‘to do’ list (see this informative piece)
Millionaire US media baron Ted Turner believes a global population of two billion would be ideal, and billionaire Bill Gates has pledged hundreds of millions of dollars to improve access to contraception in the Global South.
Gates has also purchased shares in Monsanto valued at more than $23 million at the time of purchase. His agenda is to help Monsanto get their genetically modified organisms (GMOs) into Africa on a grand scale. In 2001, Monsanto and Du Pont bought a small biotech company called Epicyte that had created a gene that basically makes the male sperm sterile and the female egg unreceptive.
Bill Gates’ father has long been involved with Planned Parenthood:

“When I was growing up, my parents were always involved in various volunteer things. My dad was head of Planned Parenthood. And it was very controversial to be involved with that.”

The above quotation comes from a 2003 interview with Bill Gates.
Planned Parenthood was founded on the concept that most human beings are reckless breeders. Gates senior is co-chair of the Bill & Melinda Gates Foundation and a guiding light behind the vision and direction of the Gates Foundation, which is heavily focused on promoting GMOs in Africa via its financing of the Alliance for a Green Revolution in Africa (AGRA).
The Gates Foundation has given at least $264.5 million to AGRA. According to a report published by La Via Campesina in 2010, 70 percent of AGRA’s grantees in Kenya work directly with Monsanto and nearly 80 percent of the Gates Foundation funding is devoted to biotechnology. The report also explains that the Gates Foundation has pledged $880 million to create the Global Agriculture and Food Security Program (GAFSP), which is a heavy promoter of GMOs.
The issue of genetic engineering cannot be fully understood without looking at the global spread of US power. The oil-rich Rockefeller dynasty helped promote the ‘green revolution’, which allowed the US to colonise indigenous agriculture across large parts of the planet. By projecting power through the WTO, IMF and World Bank, Washington has been able to make food and agriculture central to its geopolitical strategy of securing global dominance.
As with the control of food and agriculture, the US also regards depopulation as a potential geo-strategic tool (see this) in the quest for control of global resources. What better way to achieve this via a (GM) tampered-with food system that US agribusiness has increasingly come to dominate?
What better way to achieve this than with ‘spermicidal corn’ for example? In Mexico, there is concern about biopharmaceutical corn. Some years ago, Silvia Ribeiro, of the ETC organization, stated:

“The potential of spermicidal corn as a biological weapon is outrageous, since it easily interbreeds with other varieties, is capable of going undetected and could lodge itself at the very core of indigenous and farming cultures. We have witnessed the execution of repeated sterilization campaigns performed against indigenous communities. This method is certainly much more difficult to trace.”

While most of the literature on GMOs is concerned with the impacts of crops that have been genetically modified to deal with pests or herbicide spraying, there are very worrying trends regarding plants being genetically modified to contain industrial pharmaceuticals or possess possible contraceptive traits.
The world’s problems are not being caused by overpopulation, as Turner states, but by greed and a system of ownership and global power relations that ensures wealth flows from bottom to top. The issue at hand should not be about stopping population growth in its tracks but about changing a socially divisive global economic system and the unsustainable depletion of natural resources.
Millionaires like Ted Turner believe it should be a case of carry on consuming regardless, as long as the population is cut. This is the ideology of the rich who regard the rest of humanity as a problem to be ‘dealt with.’ He says there are ”too many people using too much stuff.” He couldn’t be more wrong. For instance, developing nations account for more than 80 percent of world population, but consume only about one third of the world’s energy. US citizens constitute 5 percent of the world’s population but consume 24 percent of the world’s energy.
We should be weary of a politically and militarily well-connected biotech sector which has ownership of technology that allows for the genetic engineering of food and a gene that could be used (or already is) for involuntary sterilization. From covert vaccination campaigns to germ warfare and geo-engineering, sections of the population around the world have too often been sprayed on, injected or exposed to harmful processes to induce sterility, infertility or to merely see the outcome of exposures to radiation, bacteria or some virus. It is for good reason some conflate GMOs and bio-terror.
Herbert Marcuse once summed up the problem facing us by saying that the capabilities — both intellectual and technological — of contemporary society are immeasurably greater than before. As a result, the scope of society’s domination over the individual is also immeasurably greater than ever before. That domination comes in increasingly sinister forms.

Colin Todhunter is an extensively published independent writer and former social policy researcher. Originally from the UK, he has spent many years in India. His website is www.colintodhunter.com https://twitter.com/colin_todhunter
~~~~~~~~~~~~~~~~~~~~~~~~~
See featured article here
TLB recommends you visit Global Research for more great/pertinent articles.
Thanks to: http://www.thelibertybeacon.com