ANONYMOUS FEAR MONGERING ABOUT THE PATRIOT ACT FROM THE WHITE HOUSE AND NEW YORK TIMES Sun May 31, 2015 5:43 pm 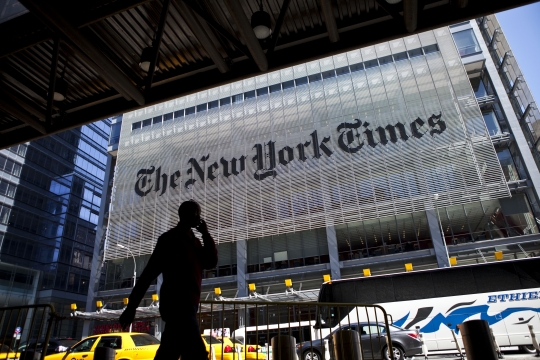 ANONYMOUS FEAR MONGERING ABOUT THE PATRIOT ACT FROM THE WHITE HOUSE AND NYT
BY GLENN GREENWALD
THURSDAY AT 1:00 PM

Several of the most extremist provisions of the 2001 Patriot Act are going to expire on June 1 unless Congress reauthorizes them in some form. Obama officials such as Director of National Intelligence James Clapper and new Attorney General Loretta Lynch have been engaged in rank fear-mongering to coerce renewal, warning that we’ll all be “less safe” if these provisions are allowed to “sunset” as originally intended, while invoking classic Cheneyite rhetoric by saying Patriot Act opponents will bear the blame for the next attack. In an interview yesterday with the Intercept, ACLU Deputy Legal Director Jameel Jaffer explained why those scare tactics are outright frivolous.

Enter the New York Times. An article this morning by Julie Hirschfeld Davis, in the first paragraph, cites anonymous Obama officials warning that “failing to [strike a deal by the deadline] would suspend crucial domestic surveillance authority at a time of mounting terrorism threats.” Behold the next two paragraphs:


“What you’re doing, essentially, is you’re playing national security Russian roulette,” one senior administration official said of allowing the powers to lapse. That prospect appears increasingly likely with the measure, the USA Freedom Act, stalled and lawmakers in their home states and districts during a congressional recess.

“We’re in uncharted waters,” another senior member of the administration said at a briefing organized by the White House, where three officials spoke with reporters about the consequences of inaction by Congress. “We have not had to confront addressing theterrorist threat without these authorities, and it’s going to befraught with unnecessary risk.”

Those two paragraphs, courtesy of the Obama White House and the Paper of Record, have it all: the principal weapons that have poisoned post-9/11 political discourse in the U.S.

We have the invocation of wholly vague but Extremely Scary and Always Intensifying Terrorism Dangers (“at a time of mounting terrorism threats”). We have the actual terror threat that failure to accede to the government’s demands for power will result in your death (“you’re playing national security Russian roulette”); compare what Bush officials spewed in 2005 about the few members of Congress who tried to enact some mild Patriot Act reforms back then (White House press secretary Scott McClellan: “In the war on terror, we cannot afford to be without these vital tools for a single moment … The time for Democrats to stop standing in the way has come”).

And we have the New York Times – in the name of reporting on White House efforts to pressure Congress to act – granting anonymity to “senior administration officials” to spew their official fear-mongering script. This isn’t even an instance where some administration “source” called the paper pretending to leak information that was really just official narrative; this was a White House-arranged call where anonymity was demanded as a condition for the honor of stenographically disseminating their words.

Worst of all, it’s all published uncritically. There’s not a syllable challenging or questioning any of these dire warnings. No Patriot Act opponent is heard from. None of the multiple facts exposing these scare tactics as manipulative and false are referenced.

It’s just government propaganda masquerading as a news article, where anonymous officials warn the country that they will die if the Patriot Act isn’t renewed immediately, while decreeing that Congressional critics of the law will have blood on their hands due to their refusal to obey. In other words, it’s a perfect museum exhibit for how government officials in both parties and American media outlets have collaborated for 15 years to enact one radical measure after the next and destroy any chance for rational discourse about it.

Are terror threats ever not “mounting”? It’s now embedded in the journalistic slogan: Mounting Terrorism Threats.

UPDATE: Commenter Kitt argues, quite reasonably, that I omitted what may be the most darkly hilarious White House claim as helpfully laundered by the NYT, found in the last paragraph:

“Hot standby“: how they must have congratulated themselves when they coined that. Note, too, that the last thing the White House and NYT tells you to make you scared is that if the Patriot Act provisions lapse, it’d mean they’d have to “obtain a court order” before getting the records they want:frightening.  [LOL!!! Its what they should have been doing all along! -AK]


Email the author: glenn.greenwald@theintercept.com
Posted by Obi-Wan Kabuki at 5:50 PM

Re: ANONYMOUS FEAR MONGERING ABOUT THE PATRIOT ACT FROM THE WHITE HOUSE AND NEW YORK TIMES Sun May 31, 2015 9:17 pm

The Patriot Act Debate: Let’s give the finger to FEAR

Posted on May 31, 2015 by Ann Kreilkamp
I love that some humans actually use their imaginations, and that they do so to nudge us to laugh in the face of the terror that, for example, Obama conjures, when he warns of the usual danger of “undermining,” get ready, folks, “NATIONAL SECURITY.” OOOO! EEEEK!

What could happen if the Patriot Act expires

Yes. Let’s just laugh at all the silly ones trying to corral us into believing their lies. Of course, it’s possible that the Patriot Act expiring could just, well, stimulate a new FF (False Flag)! Hmmmm. . . Is Obama dropping a hint? If so, laugh again. He’s not even the Wizard of Oz. He’s just a puppet the Wizard uses, and even the Wizard, if we laugh long and hard enough, will vanish in a puff of smoke.

Re: ANONYMOUS FEAR MONGERING ABOUT THE PATRIOT ACT FROM THE WHITE HOUSE AND NEW YORK TIMES Sun May 31, 2015 9:17 pm