OUT OF MIND » DISCLOSURE » HISTORIES MYSTERIES » Ancient Urns or Drinking Vessels for Giants? Behind the Mysterious Plain of Jars in Laos

Ancient Urns or Drinking Vessels for Giants? Behind the Mysterious Plain of Jars in Laos

Ancient Urns or Drinking Vessels for Giants? Behind the Mysterious Plain of Jars in Laos Thu Jun 04, 2015 6:39 pm 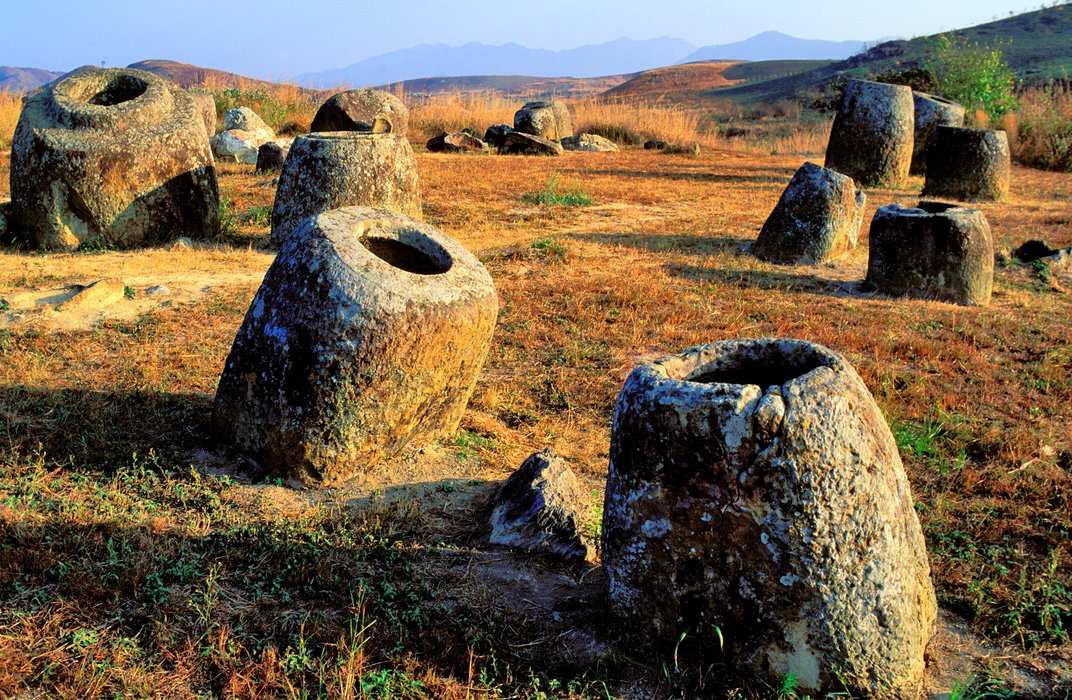 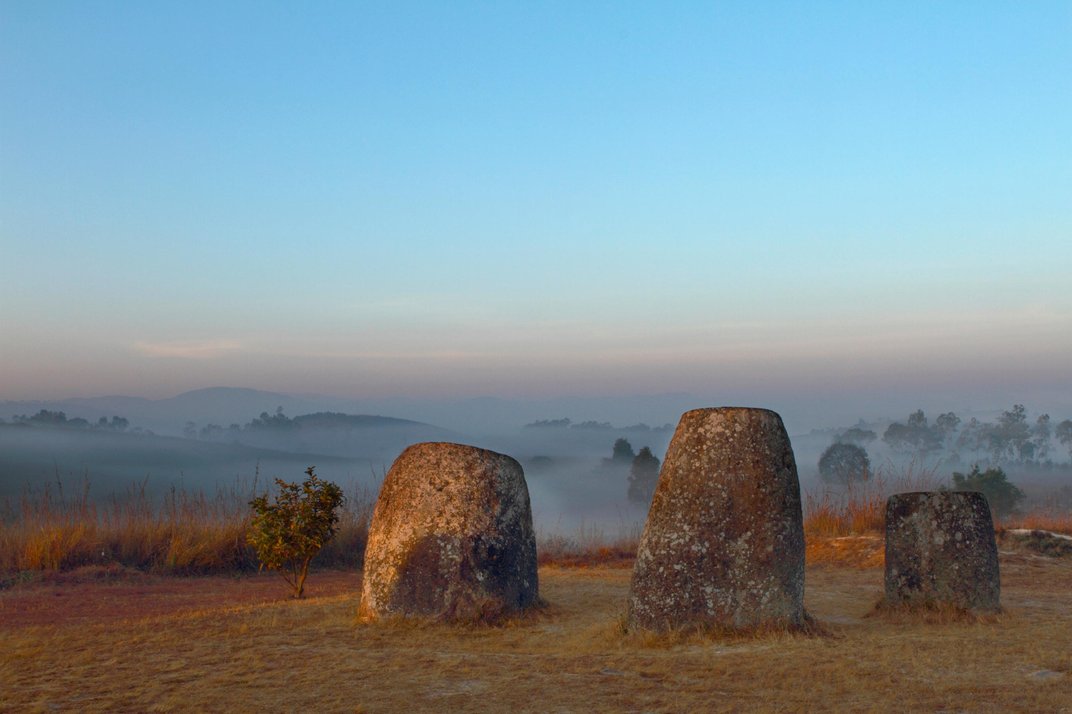 A grassy area studded with hulking, 2,000-year-old jars provides a surreal sight as well as an archeological puzzle

Stonehenge inspires awe, but there’s an even more mysterious ancient scene in Laos. The Plain of Jars consists of thousands of prehistoric stone vessels scattered over hundreds of square kilometers near Phonsavan, in the northeastern part of the country—a hilly area, despite the “plain” in the name. The huge jars form a surreal sight—some are up to ten feet tall and weigh several tons. It’s an archeological wonder that experts still haven’t pinned down.

French archeologists began puzzling over the vast display in the early 20th century. One, Henri Parmentier, who visited in 1923, found that although the contents of many of the jars had already been plundered, a typical one might contain one or two black pots, one or two hand axes, a “bizarre object” he concluded was a lamp, glass beads, drilled carnelian beads, earrings of stone or glass, bronze bells, and “frequently the debris of human bones.” Yet another French archeologist, Madeleine Colani, is credited with providing much of the early information about the site after conducting field research there in the 1930s and writing a tome called The Megaliths of Upper Laos—which, according to the New York Times, is a “719-page, two-volume hardcover available only in French.”
Archeologists say that the structures, some of which date back to 2,000 years ago, may be burial-related, though one oft-reported local legend declares that “a tribe of giants used them as wine chalices to celebrate a great victory." 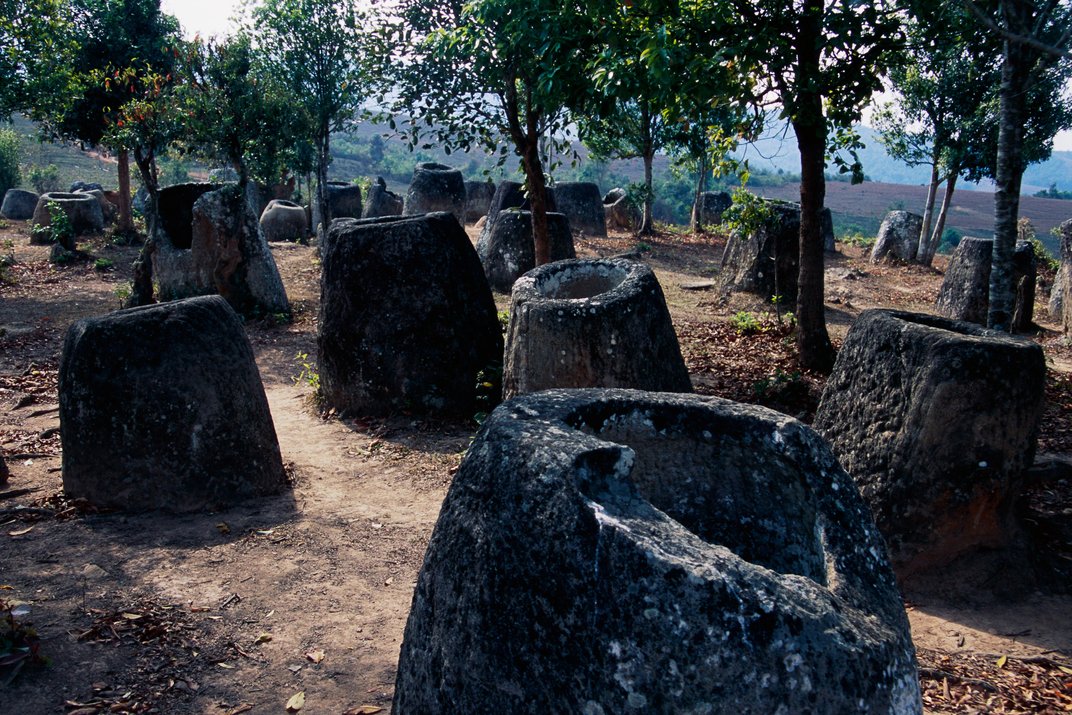 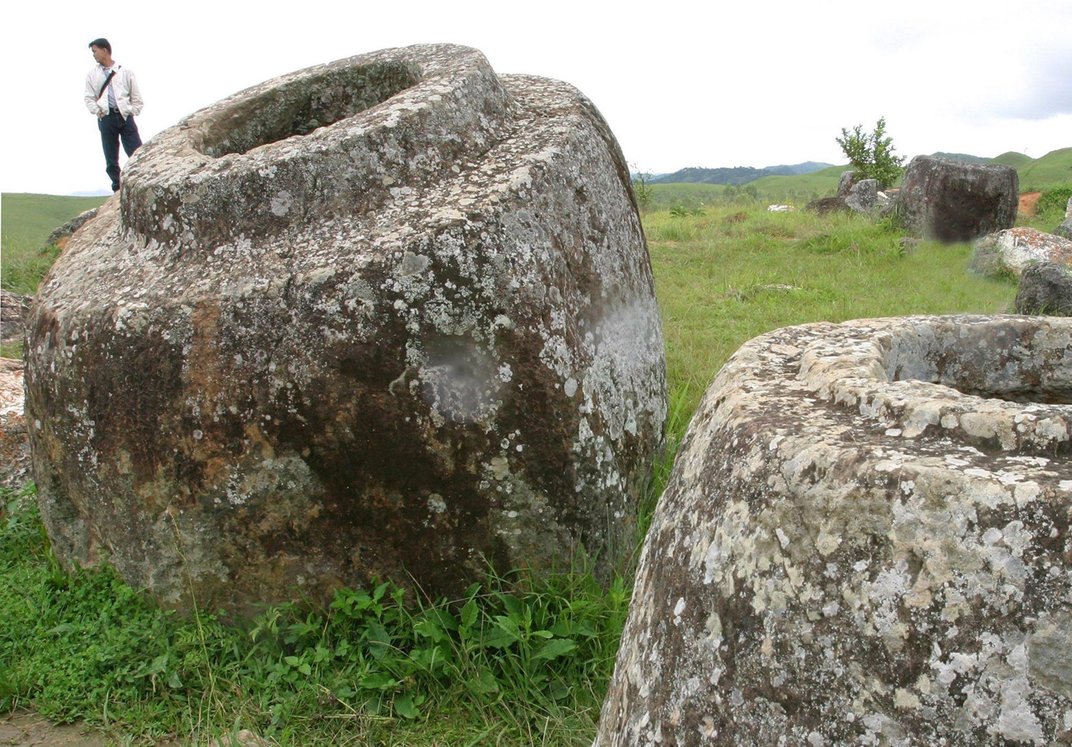 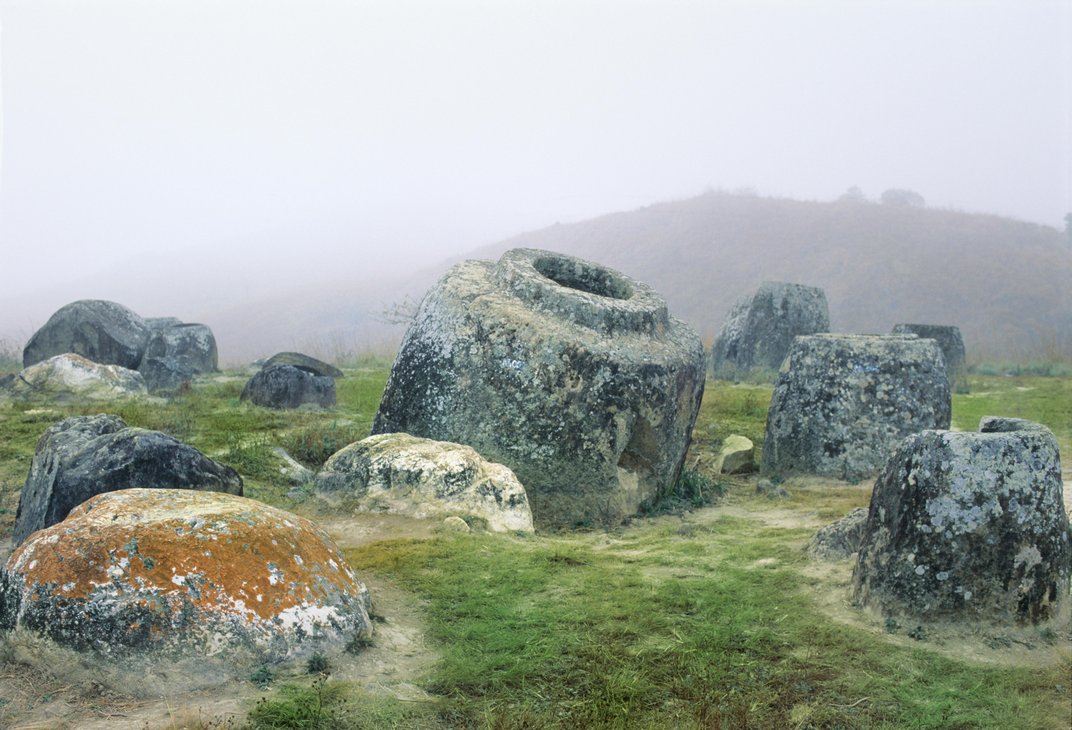 The jars are mostly undecorated, but some feature carved human figures or faces. There are circular stone discs near the jars, thought to be lids, and these, according to UNESCO, “are also sometimes carved with representations of humans, tigers or monkeys.” Similar creations exist elsewhere, including in a part of India 600 miles away, but it’s still unclear exactly which civilization made the ones in Laos.
More recently, UNESCO has classified the area as a tentative addition to the World Heritage List, “important but imperiled.” Indeed, there’s another layer of history aside from the ancient puzzle. In the 1960s and 70s, during the Indochina war, American forces dropped more than 2 million tons of bombs on Laos—and the Plain of Jars area is still pocked with craters formed by those explosions. The region still includes unexploded bombs, land mines and other unexploded weapons, and, as the craters reveal, is “one of the most heavily bombed places on the planet.”
Despite the military attacks, the mysterious works have survived. And Plain of Jars is still northeastern Laos’ most popular tourist attraction, with visitors staying along carefully marked safety paths as they marvel at this ancient, unsolved wonder. 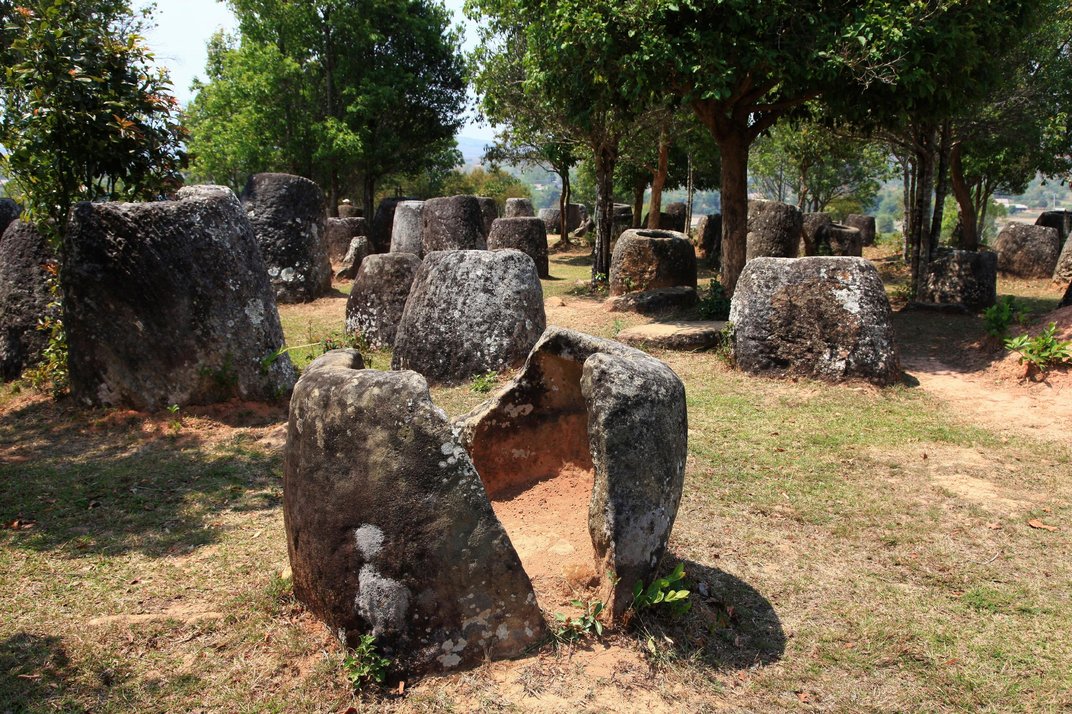 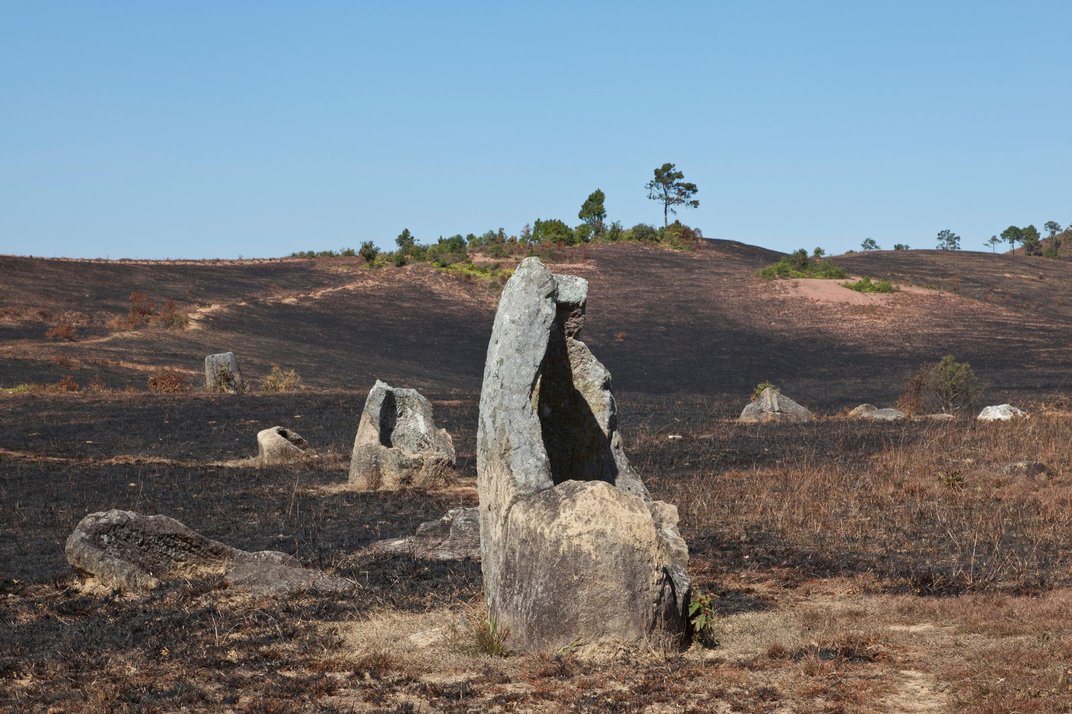 Read more: http://www.smithsonianmag.com/travel/ancient-urns-or-drinking-vessels-giants-behind-laos-mysterious-plain-jars-180955462/#LbXGQX2bWiAj4oTQ.99
Give the gift of Smithsonian magazine for only $12! http://bit.ly/1cGUiGv
Follow us: @SmithsonianMag on Twitter

OUT OF MIND » DISCLOSURE » HISTORIES MYSTERIES » Ancient Urns or Drinking Vessels for Giants? Behind the Mysterious Plain of Jars in Laos