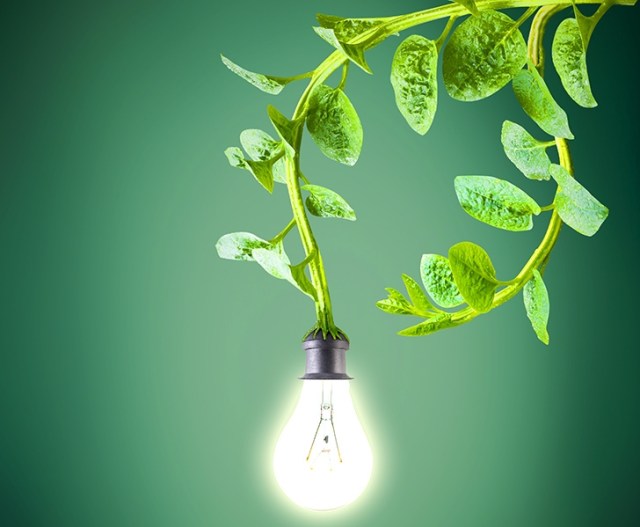 Plant-e, a company based out of the Netherlands, has found a way to harness electricity from living plants, using them to power Wi-Fi hotspots, cell phone chargers, and even streetlights. The company debuted their project, called “Starry Sky,” in November of 2014 near Amsterdam, where they lit up more than 300 LED streetlights at two different sites. Their plant power technology is also being used to power the company’s headquarters in Wageningen.
The company was founded in 2009, and was a spin-off from the department of Environmental Technology of Wageningen University. Again, they develop products in which living plants generate electricity. Their technology allows them to produce electricity from practically every site where plants can grow.
“Via photosynthesis a plant produces organic matter. Part of this organic matter is used for plant-growth, but a large part can’t be used by the plant and is excreted into the soil via the roots. Around the roots naturally occurring micro-organisms break down the organic compounds to gain energy from. In this process, electrons are released as a waste product. By providing an electrode for the micro-organisms to donate their electrons to, the electrons can be harvested as electricity. Research has shown that plant-growth isn’t compromised by harvesting electricity, so plants keep on growing while electricity is concurrently produced.” (source)
Just imagine, a house with a roof full of plant/tree life powering your home. On the company’s website, they feature animated pictures of mini-forests growing on building rooftops supplying power to the entire building. It’s pretty cool to imagine, isn’t it?
It’s important to mention that at the moment, the main problem is the quantity of energy that can be generated. There is still a long way to go with regards to making enough energy to have a completely reliable commercial product, but things are looking promising, as the company is already selling products that enable you to harvest energy from plants. Again, they are also using the technology to power their headquarters…
For more information on the technology or to read some of their recent publications, see: www.plantpower.eu – or visit their website listed in the sources.
More and more energy innovations seem to be emerging every single day, like this one. Perhaps this is why the powerful and wealthy Rockefeller family recently sold out of fossil fuels and switched their investments towards clean energy? Change is coming, and it’s about time. The world’s largest private bank, UBS, is also urging investors to join the clean, renewable energy movement.They did so with a statement expressing that power plants in Europe might be completely extinct within the next 10 to 20 year (you can read more about that story here). It’s something that needs to happen, and it needs to happen now. We’ve seen the solutions, now it’s time to implement them. It’s become clear that there are many alternative ways to generate energy without destroying the planet.
Source:
http://thegoldenlightchannel.com/dutch-harvest-electricity-from-living-plants-to-power-streetlights-wi-fi-cell-phones/