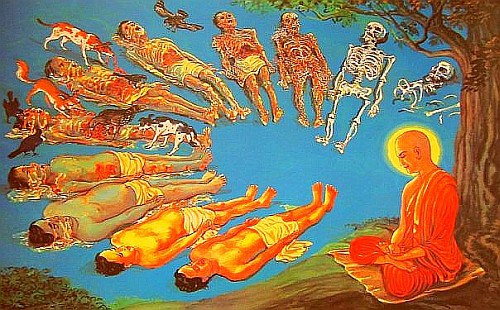 This chapter is excerpted from the expanded 2nd edition of Zig Zag Zen: Buddhism and Psychedelics, edited by Allan Badiner and Alex Grey, published by Synergetic Press.
Join Allan Badiner, Alex Grey, and Julie Holland for a book launch party and discussion at the Rubin Museum in NYC, June 17. Learn more here.

Mystical experiences are usually conceived of as coinciding with altered states of consciousness. As a result, a consideration of mystical states should begin with a discussion of consciousness itself. Yet the nature of consciousness is one of the most fundamental and difficult of all philosophical questions.

The answers to this question have ranged across an enormous spectrum throughout cultures and eras. At one extreme, they include the idea that con-sciousness is a mere by-product of matter; this is the philosophy of materialism. At the other extreme is the idea that consciousness is the fundamental substrate of reality; this is the philosophy of absolute idealism as proposed, for example, by Yogachara Buddhism. For Nietzsche, consciousness was a suffering-producing disease of life, while for the Vedantic religion of India, it is being and bliss. Small wonder, then, that two contemporary researchers, Douglas R. Hofstadter and Daniel Dennett, claim “So far there is no good theory of consciousness. There is not even agreement about what a theory of consciousness would be like. Some have gone so far as to deny that there is any real thing for the term ‘consciousness’ to name” (Hofstadter and Dennett, 1982).
Yet whatever consciousness is, the desire to alter it is clearly common and widespread. In a cross-cultural survey, anthropologist Erika Bourguignon found that 90 percent of the several hundred societies she surveyed possessed institutionalized means to alter states of consciousness. She concluded that “this represents a striking finding and suggests that we are, indeed, dealing with a matter of major importance, not merely a list of anthropological esoterica” (Bourguignon, 1973). Moreover, she found that in traditional societies, these altered states were viewed as sacred, almost without exception. In his book The Natural Mind, Andrew Weil, a leading researcher on psychoactive substances, concluded that “the desire to alter consciousness periodically is an innate normal drive analogous to hunger or sexual desire” (Weil, 1972).
If this is so, it raises the obvious question of the nature of an “optimal” state of consciousness. This is the question I would like to discuss here, along with a related issue of whether psychedelics can ever induce these optimal states.
In the West it is commonly assumed that our usual waking state is optimal. Yet many religious and contemplative traditions make claims about consciousness that run counter to Western assumptions, among them that:

The teachings of mystical traditions inform us that our usual state of consciousness is not only suboptimal, but dreamlike and illusory. They assert that whether we know it or not, without mental training, we are prisoners of our own minds, unwittingly trapped by a continuous inner dialogue that creates an all-consuming distortion of perception. These traditions suggest that we live in a collective dream variously known as maya, “illusion,” or what psychologist Charles Tart calls “consensus trance.”
Obviously, if these various philosophies regard our usual state as subopti-mal, they must regard some other state(s) as superior. Numerous traditions con-verge on the idea that the unio mystica, described by mystics and saints, consti-tutes the supreme states of consciousness—and in fact is the highest achievement of human existence. In these states the mystic transcends the usual boundaries of ego and feels at one with the universe. Usually the state of mystical union arrives after years or even decades of intense spiritual and mental discipline. This training aims to overcome the fact that, as Sigmund Freud said, “man is not even master in his own house . . . in his own mind.” This is why, as the great Hindu sage Ramana Maharshi expressed it, “all scriptures without any exception proclaim that for attaining salvation mind should be subdued” (Maharshi, 1955).
Yet with the advent of psychedelics in the West came a remarkable claim. Noncontemplatives who took these substances reported a vast range of experi-ences—some high, some low; some ecstatic, some demonic—but also some that seemed remarkably similar to those described by mystics across the centuries. This set off a debate that still rages about the nature of “chemical mysticism.”
Proponents, such as writers and scholars of religion Aldous Huxley, Walter Houston Clark, and Huston Smith, offered arguments supporting the equivalence of chemical and natural mystical experiences. They based their arguments on the experiential similarities between natural and chemical states and on ex-periments such as that of Walter Pahnke, who in 1962 administered psilocybin to students at the Harvard Divinity School before a Good Friday church service. The majority of the group reported a variety of experiences including difficult psychological struggles that sounded indistinguishable from reports of classical mystical experiences. Twenty-five years later, almost all the subjects who were given psilocybin still affirmed that they “considered their original experience to have had genuinely mystical elements and to have made a uniquely valuable contribution to their spiritual lives” (Pahnke Study, 1991).
Others, including scholars of religion R. C. Zaehner and Arthur Koestler, argued vehemently against the idea that a few milligrams or even micrograms of some chemical could possibly induce experiences that contemplatives labor for decades to achieve. In a piece entitled “Do Drugs Have Religious Import?” (the most frequently reprinted article in the history of the American Journal of Philosophy), Huston Smith considered the arguments against the equivalence of chemical and natural mysticism. He concluded that these arguments were unconvincing (Smith, 1964).
The arguments, and Smith’s responses to them, can be summarized as follows:

Despite these well-argued points, the debate continues over whether psychedelically induced mystical experiences are “really genuine.” The psychia-trist Stanislav Grof, who probably did more research on psychedelics than anyone else before authorized research was curtailed in the mid-1960s, wrote that “after thirty years of discussion, the question whether LSD and other psychedelics can induce genuine spiritual experience is still open” (Grof, 1980).
One reason the debate continues is that there is no adequate theory of mystical states that could resolve it. For the purposes of this discussion, the term “mystical experience” will refer to an altered state of consciousness characterized by: