The extraterrestrial Messages of Nikola Tesla

Tesla believed he received alien messages at the end of the nineteenth century
It is not a secret that there are numerous inventions of Tesla that have been attributed to other “inventors”, among these inventions are the radio and the first machine capable of searching for extraterrestrial life. The FBI seized documents including numerous inventions that were way ahead of Teslas time, possible secret technology, including a version of its famous wireless transmitter that could send radio waves focused to distant points of the solar system.
While Tesla’s genius is indisputable, some people question whether his mind became delusional at some option. What is true is that Tesla was interested, throughout his life, in developing technology to contact extraterrestrial intelligence and believed that, at least in one occasion, he had detected an alien signal.
Since 1896, Tesla believed that a version of his famous wireless transmitter could be used to contact intelligent beings on other planets. In the summer of 1899, while working in his laboratory in Colorado Springs, Tesla believed to have observed a series of numerical codes in cosmic radio signals, which he interpreted as a sign of intelligence that originated from pants inside our solar system. But is it possible that Tesla did in fact receive an extraterrestrial message? If so where did it come from?
Tesla was asked by the Red Cross to predict man’s greatest possible achievement over the next century. The letter below was his reply.
A much-needed transcript follows.
(Source: Tesla Society; Image: Tesla at work, via.)

To the American Red Cross, New York City.
The retrospect is glorious, the prospect is inspiring: Much might be said of both. But one idea dominates my mind. This — my best, my dearest — is for your noble cause.
I have observed electrical actions, which have appeared inexplicable. Faint and uncertain though they were, they have given me a deep conviction and foreknowledge, that ere long all human beings on this globe, as one, will turn their eyes to the firmament above, with feelings of love and reverence, thrilled by the glad news: “Brethren! We have a message from another world, unknown and remote. It reads: one… two… three…”
Christmas 1900
Nikola Tesla


Curiously, Tesla wasn’t the only one who believed he received messages from otherworldly beings. Marconi, referred to by history as the inventor of the radio, even thought Tesla patented it a couple of years sooner than Marconi, also received “messages” from other planets, but Marconi’s messages were dismissed as a simple interference. Tesla’s case was more complex.
In 1937, Nikola Tesla said: n 1937, he announced:
“I have devoted much of my time during the year past to the perfecting of a new small and compact apparatus by which energy in considerable amounts can now be flashed through interstellar space to any distance without the slightest dispersion.” (New York Times, Sunday, 11 July 1937.)
Interestingly, In the 1970’s L.G. Lawrence (field manager of the Ecola Institute) revealed a communication with Extraterrestrial Beings:
“On October 29, 1971… while conducting exploratory RBS [Remote Biological Sensing] experiments in Riverside County, CA, our field instrumentation’s organic transducers complex intercepted a train of apparently intelligent communication signals (tight spacing and discrete pulse intervals) while accidentally allowed to remain pointed at the constellation Ursa Major during a short rest period. The phenomenon prevailed for somewhat over 33 minutes….

“A somewhat similar phenomenon was observed on April 10, 1972…. The apparent signals, aside from seemingly growing weaker, appear to be transmitted at great intervals ranging from weeks to months, possibly years. A faint, coherent , binary-type phenomenon was noted during aural monitoring…. Intervals between rapid series of pulse trains ranged from… 3 to 10 minutes…. 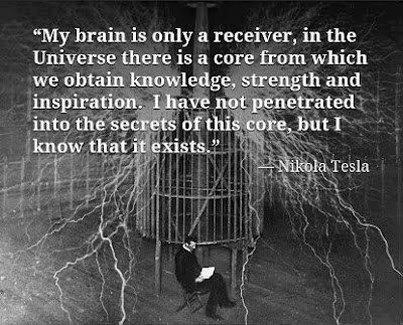 Secrets of the Universe
In the 1980’s engineer Greg Hodowanec was able to confirm some of Tesla’s claims based on his own theory of Rhysmonic Cosmology while experimenting with a Gravity Wave Detector (GWD) of his own design. By 1988, Hodowanec stated that “…Such signals are being received today with simple modern-day scalar-type signal detectors… coherent modulations are being ‘heard’ in [the microwave] background radiation. The most prominent modulations being three pulses (code S) slightly separated in time, a la Tesla! On occasions, the code equivalents of an E, N, A, or K, are also heard, but the most persistent response is SE, SE, etc. 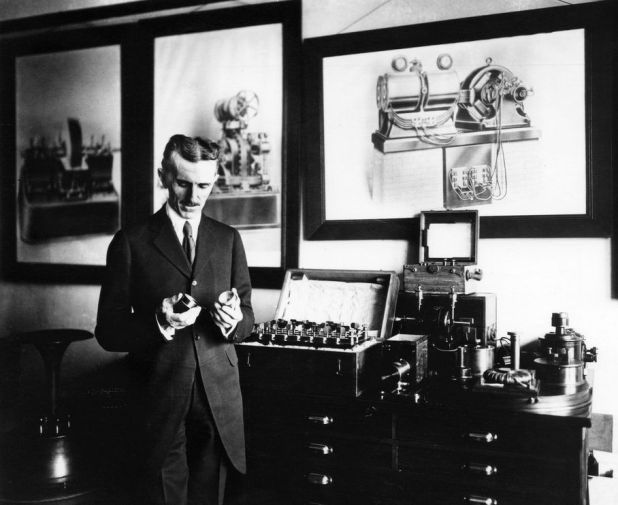 Nikola Tesla, physicist, engineer, and inventor of alternating current, in the early 1900s
PHOTOGRAPH BY EVERETT COLLECTION INC., ALAMY
“Any l/f type noise detector will respond to this background modulation. However, the experimenter must be careful that he is not creating these responses at the ‘local’ level by his own or other local actions. For example, the detectors will also respond to heart beats, breathing actions, local movements, as well as possible psychic effects. The detectors are easy to make and the experimenter should easily reproduce these results.”