OUT OF MIND » TRUTH IN CONSPIRACY THEORIES? » HISTORIES MYSTERIES » A previously unknown ancient civilization discovered in the amazon

A previously unknown ancient civilization discovered in the amazon

A previously unknown ancient civilization discovered in the amazon Tue Jun 16, 2015 11:44 am


Rapid deforestation in combination with Google Earth has allowed the detection of 210 geoglyphs in 200 different site sites, in a strip of 250 kilometers by 10 kilometers wide in the Amazon. Just like the Nazca lines, the incredible geometric, zoomorphic and anthropomorphic designs of the Amazon can only be truly appreciated from the air. The question remains, why?
Numerous remains of what is obviously part of an ancient and hitherto unknown civilization has appeared under the trees of the Amazon rainforest. According to researchers, 260 huge avenues, long irrigation canals and fences for livestock have been spotted from the air. The discovery was made in the vicinity of the border between Bolivia and Brazil.
The ruins have been uncovered due to rapid deforestation, a process that is revealing what previously was hidden under deep layers of vegetation. The traditional idea many historians share,  is that before the arrival of Spanish and Portuguese in the fifteenth century, and unlike conventional history in the Andes, there weren’t any advanced civilizations in the Amazon region. But, given the fact how deforestation has revealed much of the hidden secrets of the area, scholars are confident that an advanced civilization inhabited the area in the distant past. The numerous aerial and satellite images are revealing, a complex network of towns, cities, roads and structures that until now had remained hidden under the impenetrable layer of the Amazon. 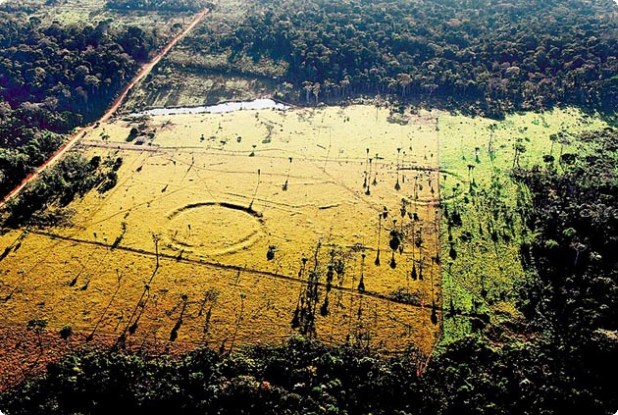 So far, researchers have been aided by Google Earth which has allowed them to identify structures that are not visible for the ground. So far, numerous discoveries have been made, some of them are square or rectangular structures, while others form concentric circles or complex geometric figures as hexagons and octagons, all connected by a network of wide avenues.
Researchers found neat trenches or pits, that are between 1 and 4 meters deep, and upturned 11-12 meters wide. These are found in different sizes and designs: circles, squares, rectangles, compound shapes, straight and parallel lines. In addition, the figures are connected by what appear to be “roads”.
Although there is no evidence that the ancient inhabitants of the Amazon have built pyramids and developed a written language, as the ancient Egyptians did, they did show signs of great social complexity and an ability to tame the environment, something very different from what they do today, as the isolated tribes living in the amazon today have a very different social agenda. 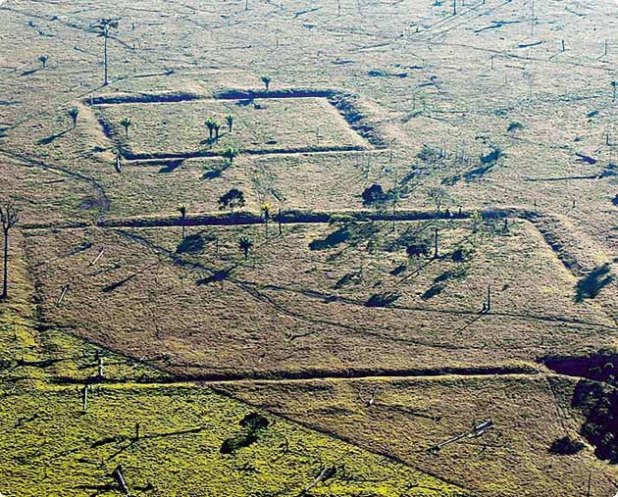 Thanks to excavation, researchers have unearthed pottery, carved stones and other elements that point towards signs of human habitation, although some of the sites did not yield any artifacts, researchers suggest that some of the archaeological sites might have had ceremonial functions while others might have been intended for defensive purposes.
The dominating features of geometry and the dimension of the geoglyphs reveals something fascinating about the ancient inhabitants of the region. Researches thought that the ancient people, local to the area were only nomads, hunters and gatherers in the distant past, but the number of structures and their size point towards a complex society with tremendous capabilities in numerous fields. Researchers estimate that in some of the archaeological sites discovered so far, the population was around 70,000. 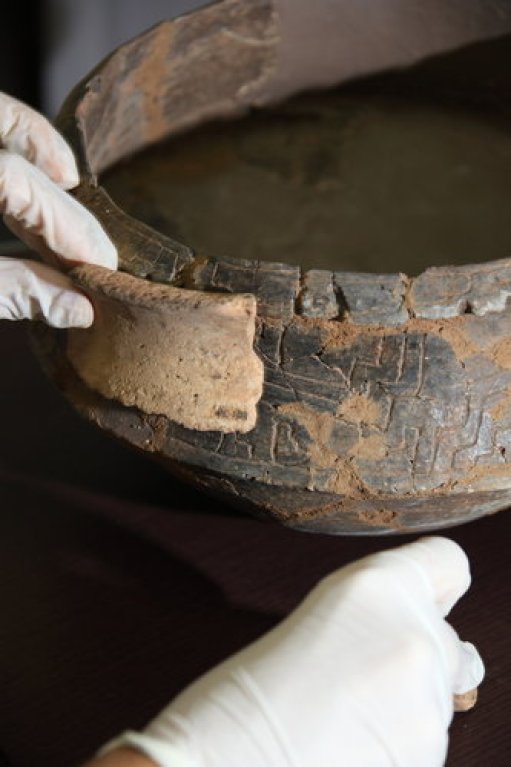 Researchers know very little about this Amazonian civilization, so far, thanks to the pottery discovered during excavations, researchers were able to place the civilization in history around 2000 years ago.
Speaking to the NYTimes, Denise Schaan, an archaeologist at the Federal University of Pará in Brazil who now leads research on the geoglyphs, said radiocarbon testing indicated that they were built 1,000 to 2,000 years ago, and might have been rebuilt several times during that period.
“If one wants to recreate pre-Columbian Amazonia, most of the forest needs to be removed, with many people and a managed, highly productive landscape replacing it,” said William Woods, a geographer at the University of Kansas who is part of a team studying the Acre geoglyphs. “I know that this will not sit well with ardent environmentalists,” Mr. Woods said, “but what else can one say?”

OUT OF MIND » TRUTH IN CONSPIRACY THEORIES? » HISTORIES MYSTERIES » A previously unknown ancient civilization discovered in the amazon

» A Previously Unknown Ancient Civilization Discovered in the Amazon
» Unknown Pharaoh of 3,600 Years Ago Discovered By Archaeologists
» Previously unknown structures found near Machu Picchu
» The Enigmatic Pyramids of the Amazon: An ancient civilization lost in time
» Petroglyphs of an unknown civilization - India