Latest topics
» Vitamin C: The Unique Qualities and Synergies of Its Different Forms

OUT OF MIND » TRUTH IN CONSPIRACY THEORIES? » HISTORIES MYSTERIES » The Enigmatic Pyramids of the Amazon: An ancient civilization lost in time

The Enigmatic Pyramids of the Amazon: An ancient civilization lost in time

The Enigmatic Pyramids of the Amazon: An ancient civilization lost in time Wed Jun 17, 2015 12:11 pm

The Enigmatic Pyramids of the Amazon: An ancient civilization lost in time
Ivan Petricevic Ancient History 0 Comments 16 Views
[url=http://pinterest.com/pin/create/button/?url=http://wp.me/p3e5AO-2Rw&description=The Enigmatic Pyramids of the Amazon: An ancient civilization lost in time&media=http://i1.wp.com/www.ancient-code.com/wp-content/uploads/2015/06/386175_310136989006370_369932460_n1.jpg?resize=660%2C330]
[/url]
In the tangled and dense jungles of the Amazon there are numerous mysteries that could probably help us understand how ancient civilizations live in the distant past. We know so little about our planet, and researchers are unaware of the possible finding that can be discovered in the Amazon. As technology moves forward and tools as Google Earth become more popular, many people try their luck hoping to make a discovery that no one else has made in the past. Google Earth has become the one of the boldest tools numerous archaeologists are using, consistently delivering huge results that help researchers in many ways.
We are talking about the pyramids of paratoari, usually referred to as “the dots”, seen in one of the satellite images from NASA.

Even thought that several researchers believe that the Pyramids of Paratoari are truncated ridge spurs, which can take the form of natural pyramids, there are many other researchers who firmly believe that these structures were built in the distant past by a civilization that has never before been seen.
Excursions to the region found plenty of evidence of Incan inhabitance in the area, such as petroglyphs, paved roads, and platforms.
The mysterious pyramidal structures were first identified via NASA satellite photograph number C-S11-32W071-03, released in 1976. The images caused numerous researchers to venture to the Manu area of dense tropical rainforest in southeast Peru in hopes to find out whether these structures were actually built by an ancient civilization, lost in time.

While renewed archaeologists have refused to take into consideration the pyramids and their artificial origin, other researchers suggest that the symmetrically space between them and uniform shape of the structures points to the fact that these are not natural sandstone formations as some have suggested.
The same debate can be seen in the “recently” discovered Pyramids in Bosnia. While numerous researchers suggest that the structures in Visoko are mere natural formations, other researchers point to the fact that the structures in Bosnia are of artificial origin, just like the pyramids of Paratoari.
We have to remember that even today, , in the twenty-first century, there are places on Earth, yet unexplored and the Amazon Jungle is one of the most unexplored regions of them all.
The Pyramids of Paratoari are symmetrically arranged structures that could not be natural formations, but the product of human hands. 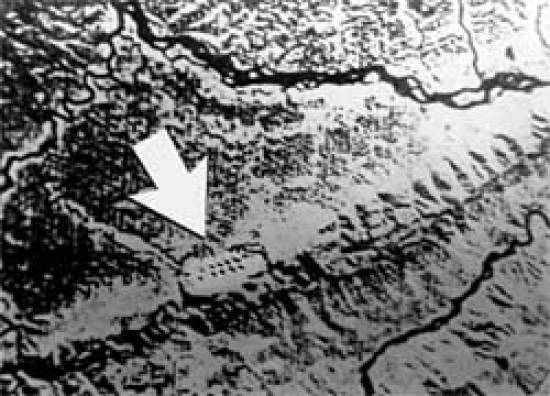 Looking at things from a historical point of view, we know that the area of Madre de Dios has been defined by many researchers in the past as the place where the Incas hid after the advance of the Spanish conquistadores towards Cusco in 1533. Wouldn’t it be logical that the Inca created monuments and structures in that region? It certainly is possible if you keep an open mind and understand that there are many hidden secrets buried beneath sands, jungles and oceans around the world.
The mystery of the Pyramids of Paratoari certainly continues and maybe one day, we will know for sure what these mysterious structures truly are.

OUT OF MIND » TRUTH IN CONSPIRACY THEORIES? » HISTORIES MYSTERIES » The Enigmatic Pyramids of the Amazon: An ancient civilization lost in time