Still from YouTube video
3.5K8261
Tags
Russia, Social networks, Thrills&Spills, Travel, Weather
Several Russian cities, including Moscow and Kursk, were partly flooded on Saturday. While streets turned into "rivers" as sewer systems failed to cope with the torrents of water, local authorities said that everything was "normal."


The city of Kursk in Russia’s southwest was flooded on Saturday, after heavy rain hit the city of some 430,000 people. Residents said the rain was the worst so far this year.

The low-lying center of the city was reported to have been affected the worst.
Residents took to social media, posting videos and photographs of roads that had literally turned into rivers in some parts of the city.


In some areas, the streets were so badly flooded that cars were submerged up to their rooftops. Some people said they had to swim to get to their vehicles.

Although there have been reports on social media that electricity went off in the city center, local emergency services have not confirmed this information, saying the city was functioning normally.


The situation was “normal” for the region where heavy rains hit quite often, spokesman of the local emergency services told Govorit Moskva (Moscow speaks) radio. The water will drain from the streets by midnight, he said.
There have been no immediate reports of injuries or on the extent of damages.

A number of images of flooded streets emerged on social networks, including views of the very heart of Moscow.

Eyewitnesses said central Tverskaya street and some of the nearby pedestrian lanes turned into raging streams of water. Pedestrian underpasses were also reported flooded.

There have been reports of numerous delays at the capital’s airports. However, the information was denied by the major air hubs Domodedovo and Sheremetyevo, where spokesmen said the rain had not interrupted services.

A hundred people have been evacuated from Waitotara - likely the south Taranaki village's entire population - after flooding engulfed the remote town.
Waitotara is located about 30 kilometres north of Whanganui. It has sixty houses and sits on the Waitotara River, which flooded in the heavy rain over the weekend.
Residents were not able to return to their homes on Sunday, as flood waters were still high, Civil Defence said. Some residents were asked to evacuate, while others self-evacuated. Many went to the nearby town of Waverley.

A state of emergency remains in place for Taranaki, Whanganui and Rangitikei.
More than  200 people were evacuated from areas near the Whanganui River, which reached record levels of 9.1 metres at Town Bridge at 3am on Sunday. Many more people had self-evacuated.
About 100 flood affected homes on the city's Anzac Parade could be inaccessible until Tuesday because of the high waters, the Ministry of Civil Defence said.

Assessments of properties along the Whanganui River had been delayed because water levels were not expected to start receding until early afternoon, despite improvements in the weather, CD director Sarah Stuart-Black said.
Slips had also come down on the aveneue and needed to be assessed before the road could reopen.
Send us your photos and videos newstips@stuff.co.nz

Tracey Grant
Flooding of the Kowhai Park Dairy on Anzac Parade in Whanganui.

The city's bridges were closed and would not reopen until structural assessments had been made. Areas of high risk were being cordoned off.
Ad Feedback
Stuart-Black said power in the region was intermittent, but water was available and civil defence centres were open at Wanganui Girls' College and at St Johns.

Mayor Annette Main was cut off from her home, 45km upriver from the city, and said the floodwater had risen so high that it was nearly lapping at her doors.

Horizon's operations team was expected to breach the stopbank by Whanganui's Kowhai Park following high tide at 2pm to allow water in the area to flow back through to the sea.
A suspected break in the fibre optic cable has left Rangitikei with limited mobile and internet coverage. Grant said the break was believed to be in the cable between Marton and Whanganui. The Rangitikei District Council evacuated six people from the Turakina Beach village of Koitiata on Saturday night with help from rural fire crews and the army.

State Highway 3 between Whanganui and New Plymouth reopened on Sunday morning, but motorists were being advised against non-essential travel. 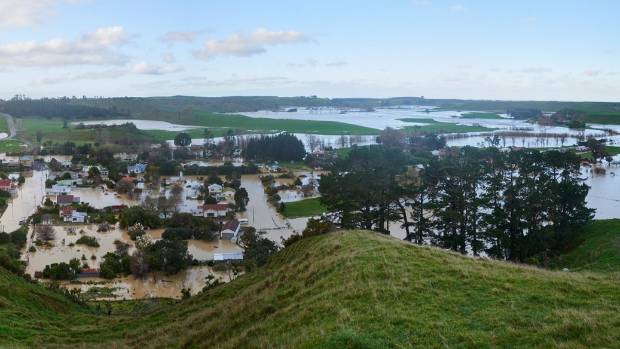 Gerry Leibbrandt
Waitotara the morning after. 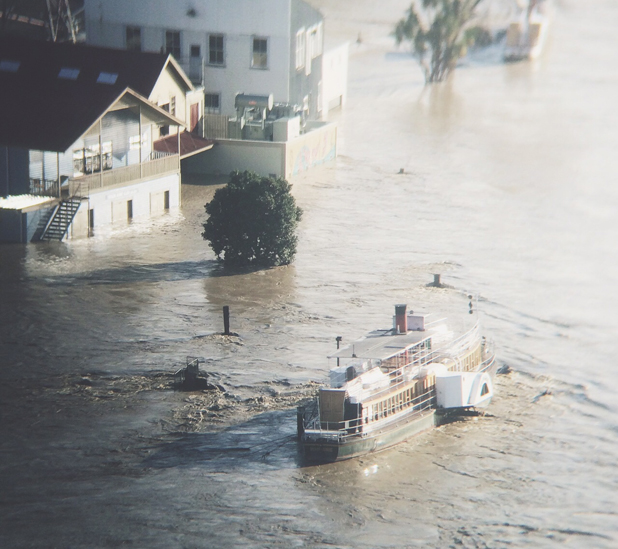 He urged those who did have to travel to allow extra time for their journey.

TRACEY GRANT/Stuff.co.nz/Supplied
Whanganui has been badly hit by flooding and a state of emergency has been put in place.

Some residents in the South Taranaki town of Waitotara slept in their cars on Saturday night after being evacuated following rising flood waters.
Waitotara suffered much of the worst damage from the widespread flooding around Taranaki and the lower North Island.  Residents began returning to the village, in their gumboots, on Sunday morning and were waiting for the waters to recede, so they could get into their homes. 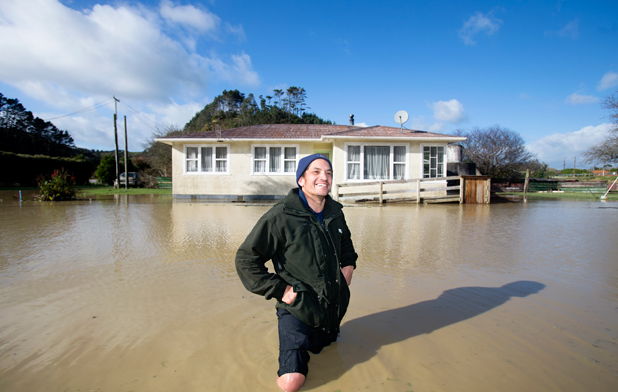 Warwick Smith/ Fairfax NZ
Manawatu River between Palmerston North & Ashhurst.
1  of  35
« Previous Next »
A Waitotara local  Sid Wyatt takes the floods in his stride. Photo: Charlotte Curd.
James Takarangi spent Saturday night in his car.
He was evacuated from his home at 10.30pm and headed for Waverley, but the accommodation filled up quickly and with all of the beds taken he ended up in his car. He returned to Waitotara on Sunday morning to find the front of his house covered in mud.

Tracey Grant/Fairfax Media
A slip forces the closure of Ikitara Rd in Wanganui East.
1  of  8
« Previous Next »
It will take a couple of days to clean up and the whole town will pitch in, he said.
"That's what we do. You just get on with it."
Waitotara School acting principal Jane Corcoran said the school hall was flooded, as was the dental clinic, but she hadn't been able to get to the main school building. Corcoran, along with some parents, had entered the school in at lunchtime on Saturday and moved everything in off the ground. 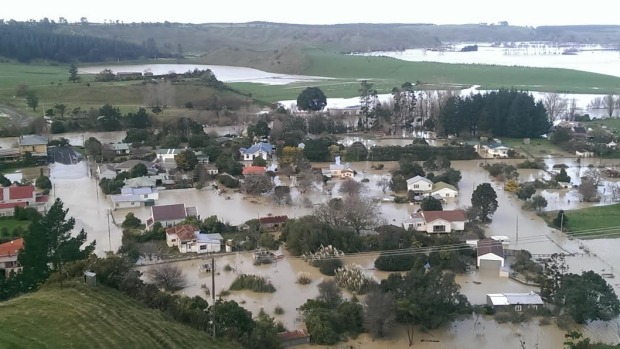 Waitotara on Sunday morning as residents started coming back. Photo: Gerry Leibbrandt
Taranaki Civil Defence group controller David Lean said the Waitotara River had been higher than the record 2004 flood and they were still assessing area.  The Waitotara Bridge remained closed.  There were serious concerns about it, Civil Defence controller Sue Kelly said.
It was "creaking and groaning" as debris – including trees and an entire shed washed downstream – smashed into its supports on Saturday night.
Federated Farmers still had some concerns for people in Whangamomona, he said. Helicopter operator Alan Beck flew over the eastern Taranaki area on Sunday morning and said many roads in the area were cut off by slips and power lines were down.
State Highway 3 at Urenui has reopened to one lane, partially restoring access between Taranaki and Waikato. The Uruti Valley has been hit by slips and trees that have taken down power lines and it was not known when full supply will be restored. At Strathmore in eastern Taranaki, faultmen are working to reconnect about 136 properties.
READ MORE:
* Consistency of Civil Defence reponse questioned
* A 3am water-logged wake up: Waitotara evacuated
* Palmerston North locals race to see swollen river despite warnings
* State of Emergency in Whanganui
* Kapiti Coast mops up
* List of roads closed to flooding, slips
* Weekend sports washed away by floods
* Waitara homes surrounded by water
* Snow warnings for South Island
PHOTOS: Flooding spreads over lower North Island
SWOLLEN RIVER QUITE A SIGHT
In Manawatu, a late Saturday night surge at the southern end of the Manawatu River saw it spill over, prompting eight people to be evacuated.
There was some water contamination due to power loss to sewage pumps, Black said.
Palmerston North city had some slips and surface flooding. In Rangitikei, commercial and residential homes were flooded in Marton, and 25 people were taken into the civil defence centre overnight.
A Marton couple were forced to sleep on lounge chairs when their eight-bedroom motel was swamped by floodwaters.
Brian and Carol Hausman's Adobe Motel on Calico Line in Marton was flooded at the weekend, with water seeping through the walls and into rooms.
"I could just sit there and ball," Brian Hausman said. "You can't do anything about it." 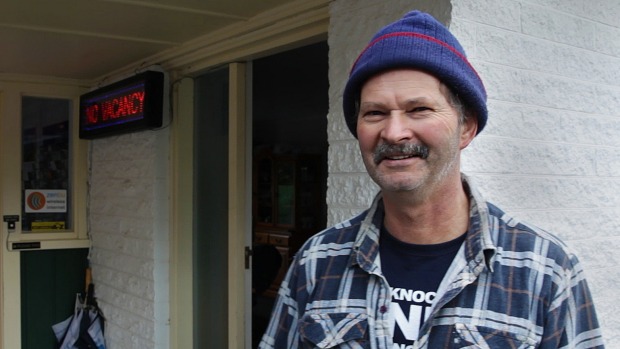 The cleanup effort began on Sunday, with friends and family helping to strip rooms and empty the units of furniture and carpet to provide space for builders to fix the water-damaged walls.
There will be no vacancy in the motel for a couple of weeks because of the damage, and the Hausmans have cancelled their bookings until they are able to fit out the rooms.
"They're all covered, even the manager's flat," Brian Hausman said.
But, fortunately, they knew the water was coming and took some precautions.
"We took everything off the floor," he said.
"The water didn't come through the doors, it came through the walls."
In Koitiata, near Turakina, there was no cellphone coverage and landlines were working intermittently. 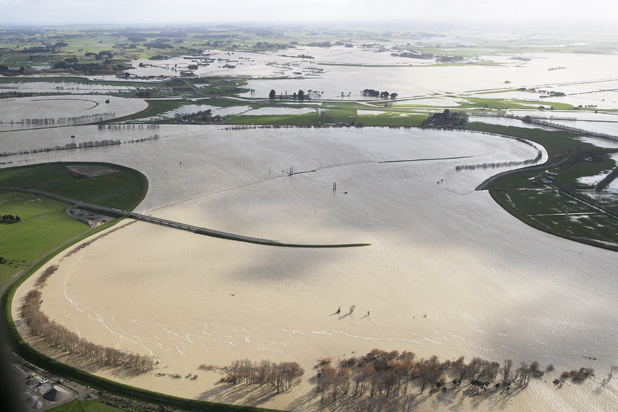 The Manawatu River south of Palmerston North. Photo: Warwick Smith/Fairfax NZ
More rain was expected between 6pm and midnight in Horowhenua, and evacuations were made in both Levin and Foxton.
The situation in Horowhenua would be closely monitored as water and waste water may become an issue, Black said.
Crews were continuing to work on the Manawatu Gorge road, which was impeded by a number of smaller slips. It was expected to remain closed for a few days, but an update on progress would be made on Monday.
The Saddle Rd, one of the alternatives to the Gorge Rd, remained under stop-go control, while the Pahiatua Track was closed.
A pump had been deployed to remove water from the flooded area of State Highway 1 near Marton and it was hoped the road would reopen on Sunday night.
A cold blast was on its way and the NZTA would be monitoring the weather to ensure as many route options were available as possible in the event of snow-related closures, Owen said.
WHAT TO DO IF YOU ARE IN A FLOODED AREA

The Wanganui District Council advise residents to stay in their homes if possible. If there is an emergency phone 111, if it is less urgent phone Civil Defence at (06) 349 0001.

The Kapiti Coast District has issued a series of public safety directives.

- Residents in flood prone areas are advised to phone 111 if they are worried about their personal safety. Call your local council if you need assistance.

- Reminder to please stay away from waterways and flood waters - rivers and streams are still running high and may contain debris.