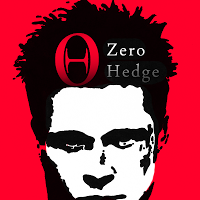 Looking at a long-term chart of the BLS' core CPI chart or the Fed's preferred inflation metric, the Core PCE, reveals that the US is patiently trudging below the Fed's goalseeked goal of roughly 2% inflation per year. Even when stripping out just the "shelter" component of CPI reveals inflation that is barely higher at just under a 3% annual increase.

Of course, by now everyone knows that the artificially suppressed, "hedonically-modified" and seasonally-adjusted inflationary readings is what has permitted the Fed to not only grow its balance sheet to $4.5 trillion but to keep rates at 0% for 8 years. Because "how will the economy recover if there is no broad inflation", the Keynesian brains in the ivory tower scream, demanding more, more, more easing just to push inflation higher.

There is only one problem with this: it is all a lie - just ask any average American whose cost of living has soared in the past decade.

Still, with reality diverging so massively from the government's official data, reality just had to be wrong somehow.

Turns out reality was right all along, as revealed by the latest "State of the Nation's Housing" report released by the Center for Housing Studies at Harvard, which showed that while inflation among most products and services may indeed be roughly as the Fed and BLS represent it, when it comes to rent - that most fundamental of staple costs - things have never been worse.

According to the report, for American renters 2013 marked another year with a record-high number of cost burdened households - those paying more than 30 percent of income for housing. In the United States, 20.7 million renter households (49.0 percent) were cost burdened in 2013.

It gets worse: a whopping 11.2 million, or more than a quarter of all renter households, had "severe cost burdens, paying more than half of income for housing." The median US renter household earned $32,700 in 2013 and spent $900 per month on housing costs. Renter housing costs are gross rents, which include contract rents and utilities.

In other words, the reason why American consumers are caught in a state of near-permanent spending depression is simple: almost half of all renters can barely afford to splurge as they are spending 30% of their income just to cover rent, a number which surges to more than half of all income for a quarter of all renting households, of which increasingly more are Millennials... Millennials whose balance sheet liabilites include over $1 trillion in student debt.

Of course, the reason for this dramatic surge in rents has been extensively documented on this website in the past: with housing affordability plunging and stringent credit standards (at least until the auto subprime bubble 2.0 shifts back into housing) and the national homeownership rate plunging back to 1993 levels for most...

... a number that is kept artificially inflated by the 65 and over age group.

... this has forced an unprecedented number of American households to seek shelter, no pun intended, in the relatively cheaper confines of a rental unit.

And we do mean relatively: on an absolute basis, asking rents across the US have never been higher:

So as more Americans are forced into a limited number of rental units, prices have exploded at a far greater pace than what is officially reported in th shelter or core CPI metric, for all - but especially for those in the lower income buckets: as seen in the lower right chart, the rental "cost burden" of households making under $30,000 is the higest ever, at well over 70%!

But nowhere is the mystery of the "missing" inflation more obvious than in the following interactive map showing that in virtually all major seaboard metro areas, including the major cities in California, New York, and Florida, the number of households with a cost burden is 50% or higher.

Click on the interactive map below to find just how much of their income households in your region pay just to have a roof above their heads.

So the next time someone, usually either a government bureaucrat or a reporter/drama major masquerading as an "economist" tells you there is no inflation, just show them this map and ask how much of their after tax income do they spend on rent.
Posted by Obi-Wan Kabuki at 4:00 PM