Three days ago we reported about a possible secret T3-RB craft photographed in the sky over Hampstead, NC on June 24, 2015. Yet two other sightings of possible T3-RB’s have been reported.

If these secret craft are indeed T3-RB's we may wonder what’s going on, since these aircraft will be kept secret from the public. 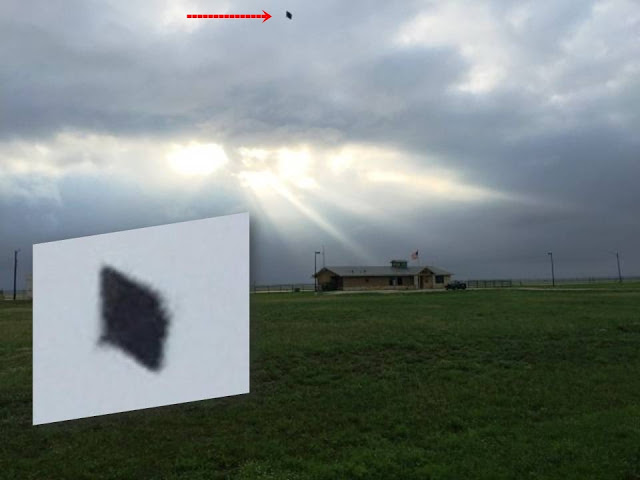 On May 17th 2015 while doing a brisk exercise walk around the area of the Hondo airport I noticed the sun rays through the clouds. I stopped and took a photo of the clouds and sun rays. My daughter and wife were nearby jogging as well. After we were done we headed back to our truck which was parked about a half mile away from where I took the picture.

I viewed my photo to show my family and noticed an object on the picture. I have an Iphone 6+ so I was able to zoom in and noticed a diamond or manta ray shaped thing in the sky.

This airport has hardly any air traffic and if there is it's usually a single prop either landing or taking off at least a few times a week. Car traffic is almost zero as well. This area is a very quite airport except for an occasional train that passes but that is almost 3/4mile away.

After we got home I loaded the picture on to my PC to view the object clearly. There was no airplane or aircraft flying nor was there any noise of one either. I never saw anything in the air when I took the picture. Mufon case 67290

Case 2: Object with golden rays shot across sky in a diagonal line over Kansas City MO.

While driving home from northern BC between Quesnel and Williams Lake on Highway 97 on June 19, 2015 I spotted a craft that I initially thought to be a huge kite and pointed it out to my wife. The highway traveled in a southerly direction and the craft seemed to be paralleling the highway and the Fraser River, the river being approx. 1/2 mile to our west. As we drove along, the object was traveling nearly at our speed of 60 mph and seemed to be across the river another mile or more. We had a very good view of the object and there was a trailing apparatus below the craft and it appeared to be of a very heavy chain or cable with a little larger object at its trailing end. That is what made me first think of a kite, but it wasn't stationary. The trailing cable was at about a 35 degree angle from the bottom of the craft. At a convenient pullout with a clear view of the craft I pulled over and took out my binoculars for a quick look and my camera, a Kodak EasyShare Z950 and zoomed in on the object for a photo, but it wouldn't seem to focus clearly on it, kept going in and out of focus. It seemed to be somewhat transparent through the viewfinder and with the binoculars, but was clearer with the naked eye.

The trailing tail looked to be at least two hundred feet or more in length and I now suspected the object at its end was an apparatus that may have been collecting data, for I was now positive it was not a Canadian aircraft of any sort I have seen.

I am a professional land surveyor with over 45 years of experience, and observations are most relevant to that occupation. The photo 1 has some nearby pine trees above the craft, a triangular shape with a definite protrusion at the top and bottom of its rear end and a long, elongated additional wing, if I may, at the bottom of the craft from near the front tapering toward the rear.

There was a bit of a haze look across the valley, but when I first saw the object it appeared much clearer than the photo and was below the main cloud cover. One lower cloud can be seen somewhat, in front of the object. I got back in the car and traveled on southward and thought if I sped up some I could get a little closer and get another photo. But as I sped up, so did the object and the long heavy trailing cable was now at a 50 degree angle, proving it had speeded up also. I stopped and got the photo 2 at a further distance away, but it doesn't show a great deal other than its semi transparency. That tree line on the horizon appeared to me to be two to three miles away and the object appeared to be even further. The tallest trees on that horizon are probably not over 100 ft. in height, which gives the impression that this craft is very large.

I kept up my speed as some lower mountains I would enter would obstruct the view and hoped to see the object again as I neared the top of the hill trending down into Williams Lake, but the craft was never seen again. Mufon case 67284.