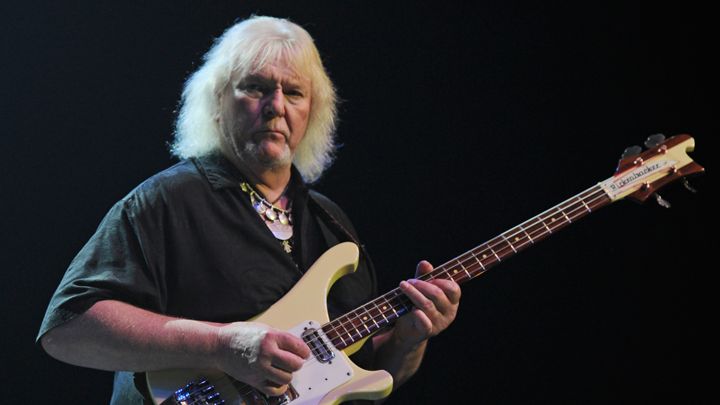 Yes' Chris Squire, shown here in concert in 2013, has passed away at the age of 67, just a month after the bassist revealed he was battling leukemia Larry Marano/Getty Images Entertainment
Chris Squire, the co-founder and longtime bassist of prog rock icons Yes and the only member of the group to feature on every studio album, has passed away just over a month after revealing that he was suffering from a rare form of leukemia. Squire was 67. Current Yes keyboardist Geoff Downes first tweeted the news, "Utterly devastated beyond words to have to report the sad news of the passing of my dear friend, bandmate and inspiration Chris Squire." 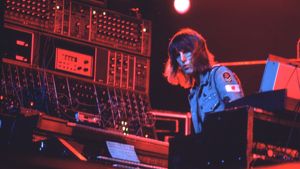 50 Greatest Prog Rock Albums of All Time »
Yes confirmed Squire's death on their official Facebook page. "It's with the heaviest of hearts and unbearable sadness that we must inform you of the passing of our dear friend and Yes co-founder, Chris Squire. Chris peacefully passed away last night in Phoenix Arizona, in the arms of his loving wife Scotty," the band wrote in a statement.
"For the entirety of Yes' existence, Chris was the band's linchpin and, in so many ways, the glue that held it together over all these years. Because of his phenomenal bass-playing prowess, Chris influenced countless bassists around the world, including many of today’s well-known artists. Chris was also a fantastic songwriter, having written and co-written much of Yes' most endearing music, as well as his solo album, Fish Out of Water."
Yes formed in 1968 after singer Jon Anderson met self-taught bassist Squire at a London music-industry bar; the pair were soon joined by guitarist Peter Banks, keyboardist Tony Kaye, and drummer Bill Bruford. Yes released their self-titled debut in 1969. However, it wasn’t until Steve Howe and Rick Wakeman replaced Banks and Kaye, respectively, that the prog rock group really hit it big with 1971's The Yes Album and Fragile.
Over the ensuing decades, Yes would see a parade of band members depart, enter and reenter, but Squire was the lone constant in the shape-shifting band, serving as their bassist for nearly 50 years. Squire is also credited as a co-writer on many of Yes' greatest cuts, including "I've Seen All Good People," "Starship Trooper," "Owner of a Lonely Heart," "Yours Is No Disgrace" and "Heart of the Sunrise."
In addition to his work with Yes, Squire was involved in other side and solo projects. His 1975 solo LP Fish Out of Water is revered among prog fans. Squire also teamed with Yes part-time guitarist Billy Sherwood for their Conspiracy project in 2000 and, more recently, formed Squackett with Genesis guitarist Steve Hackett. Yes' current incarnation featured singer Jon Davison, and as Squire told Rolling Stone, the vocalist was hired based on a recommendation from Foo Fighters' Taylor Hawkins.
In May, Squire revealed that he was recently diagnosed with acute erythroid leukemia, which would force him to miss the band's summer co-headlining tour with Toto. The absence marked the first time in the band's history that Yes performed without their longtime bassist.
"This will be the first time since the band formed in 1968 that Yes will have performed live without me," Squire said in a statement. "But the other guys and myself have agreed that Billy Sherwood will do an excellent job of covering my parts and the show as a whole will deliver the same Yes experience that our fans have come to expect over the years." 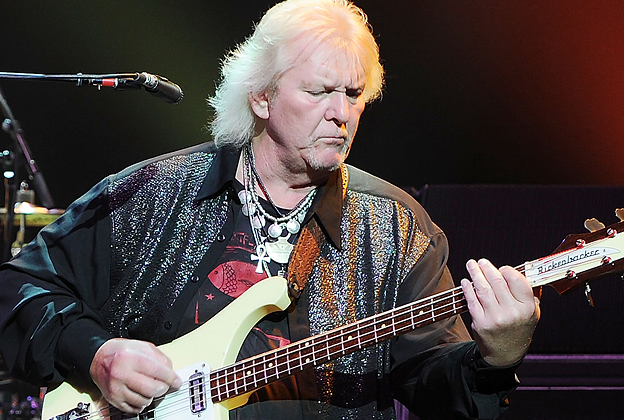 Yes' Chris Squire on Their Classic Album Tour, Rock and Roll Hall of Fame »
In February 2013, Rolling Stone spoke to Squire about Yes' legacy and the fact that Rush, but not Yes, were inducted into the Rock and Roll Hall of Fame. "Logistically, it's probably difficult for whoever the committee is to bring in Yes," Squire said. "Rush is fairly simple. It's the same three guys and always has been. They deserve to be there, no doubt about that. But there still seems to be a certain bias towards early-Seventies prog rock bands like Yes and King Crimson… In our case, we're on our 18th member. If we ever do get inducted, it would be only fair to have all the members, old and new. So that may be a problem for the committee. I don't know."