OUT OF MIND » THE INSANITY OF REALITY » FINANCIAL COLLAPSE »  Out of Order: Thousands of ATMs have been Cleaned out In Greece 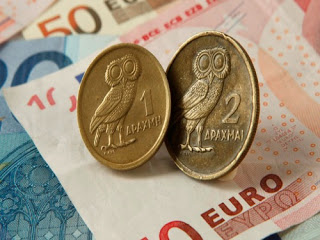 As the talks between the Greek government and their creditors slowly falls apart, the citizens of Greece are busy preparing for the worst. They don’t want to be caught off guard like they were during the last economic crash, and they certainly don’t want to end up like the people of Cyprus, and have their hard-earned savings arbitrarily taken from them.

So they’re doing everything they can to insulate themselves from the potential collapse of their financial system, which largely includes taking their money out of the system. Earlier today, sources in the banking industry told Reuters that over one-third of the ATMs in the country, have been completely cleaned out. Between 500 and 600 million Euros were withdrawn from the machines on Saturday, which managed to deplete over 2000 ATMs. Despite the alarming trend, the Greek government has claimed that everything is just hunky dory, and that there will be no capital controls imposed on bank accounts next week.

But the Greeks aren’t buying it, or at least they’re not taking any chances with what little money they’ve managed to accumulate since the last financial crisis. Shortly after Prime Minister Tsipras announced there would be a referendum on austerity, Greek citizens left their homes in droves and started lining up behind ATMs at around 2am. No matter what the government and the banks tell them, the Greeks clearly have no confidence in the system.

Joshua Krause is a reporter, writer and researcher at The Daily Sheeple, where this first appeared. He was born and raised in the Bay Area and is a freelance writer and author. You can follow Joshua’s reports at Facebook or on his personal Twitter. Joshua’s website is Strange Danger.


This article may be re-posted in full with attribution.

Continue reading the main story
ATHENS, Greece — Greece's five-year financial crisis took its most dramatic turn yet, with the cabinet deciding after an 8-hour session that Greek banks would remain shut for six business days and restrictions would be imposed on cash withdrawals.
The Athens Stock Exchange would also not open Monday, financial sector officials confirmed.
The moves were meant to staunch the flow of money out of Greek banks and spur the country's creditors to offer concessions before a bailout program expires Tuesday. The accelerating crisis has thrown into question Greece's financial future and continued membership in the 19-nation shared euro currency — and even the European Union.
For the past two days, Greeks have been rushing to ATMs to withdraw money across the country following Prime Minister Alexis Tsipras' sudden weekend decision to call a referendum on creditor proposals for Greek reforms in return for vital bailout funds.
A decree published early Monday in the official Government Gazette stipulates banks will not open Monday morning and would remain closed through Monday, July 6. The finance minister could decide to shorten or extend that period.
Withdrawals from ATMs will be capped at 60 euros ($66) daily. The decree said ATMs would be working at the latest 12 hours from its publication, meaning cash machines should open by early afternoon.
Web banking transactions would be mostly free, allowing Greeks to pay bills online. However, they cannot move money to accounts abroad.
Credit and bank cards issued abroad can be used at ATMs with no restrictions, benefiting foreign visitors to Greece and its tourist industry. Anxious tourists had joined locals at ATM lines Sunday, thinking the restrictions would also apply to them.
For emergency needs, such as importing medicines or sending remittances abroad, the Greek Treasury was creating a Banking Transactions Approval Committee to examine requests on a case-by-case basis.
The decision to impose capital controls came after a Bank of Greece recommendation, Tsipras said during a televised address.
Tsipras blamed the Eurogroup, the gathering of the eurozone's finance ministers, and its decision to reject a request for the bailout program, which expires June 30. He again asked for it to be extended by a few days to allow for a referendum.
The referendum decision, ratified by Parliament after a marathon 13-hour session that ended in the early hours of Sunday, shocked and angered Greece's European partners. The country's negotiations with its European creditors have been suspended, with both sides accusing each other of being responsible for talks breaking off.
Tsipras also blamed the European Central Bank's Sunday decision not to increase the amount of emergency liquidity the lenders could access from the central bank — meaning Greece has no way to replenish fast diminishing deposits.
"It is now more than clear that this decision has no other aim than to blackmail the will of the Greek people and prevent the smooth democratic process of the referendum," Tsipras said.
Advertisement
Continue reading the main story
Advertisement
Continue reading the main story
Advertisement
Continue reading the main story
"They will not succeed. These moves will have the exact opposite effect. They will make the Greek people more determined in their choice to reject the unacceptable ... proposals and ultimatums of the creditors," he said.
In the referendum set for next Sunday, the government is urging Greeks to vote against its creditors' proposals, arguing that they are humiliating and that they would prolong the country's financial woes.
Spooked by rumors concerning impending fuel shortages, drivers flooded gas stations across Greece, prompting the country's largest refiner, Hellenic Petroleum, to issue a statement reassuring there are sufficient reserves of gasoline to last several months. The rush to gas stations may have been prompted less by worries about shortages than the impending withdrawal limits and rumors, later proven untrue, that the use of credit or debit cards would not be permitted.
Greece's current bailout expires Tuesday, and the 7.2 billion euros ($8 billion) remaining in it will no longer be available to Greece after that date.
Without those funds, Greece is unlikely to be able to pay a 1.6 billion-euro ($1.79 billion) International Monetary Fund debt repayment due the same day.
"We don't know — none of us — the consequences of an exit from the eurozone, either on the political or economic front. We must do everything so that Greece stays in the eurozone," French Prime Minister Manuel Valls told France's i-Tele TV earlier Sunday.
"But doing everything, that means respecting Greece and democracy, but it's also about respecting European rules. So Greece needs to come back to the negotiating table," he said.
Two opinion polls published Sunday indicated that more Greeks want to stay in the eurozone and make a deal with creditors than want a rupture with the country's European partners. Both polls were conducted before Tsipras' referendum call, but they provide an indication of public sentiment.
In the poll by Alco for the Proto Thema paper, 57 percent said they believed Greece should make a deal while 29 percent wanted a rupture of ties. A Kapa Research poll for To Vima newspaper found that 47.2 percent would vote in favor of a new, painful agreement with Greece's creditors, compared to 33 percent who would vote no and 18.4 percent undecided.
Both polls were conducted from June 24-26 and had a margin of error of about 3.1 percent.
On the banking front, the ECB has said it could reconsider its decision on credit levels.
"We continue to work closely with the Bank of Greece and we strongly endorse the commitment of member states in pledging to take action to address the fragilities of euro-area economies," ECB chief Mario Draghi said.
Yannis Stournaras, governor of the Bank of Greece, said the bank would "take all measures necessary to ensure financial stability for Greek citizens in these difficult circumstances."
___
David McHugh in Frankfurt, Geir Moulson in Berlin and Jamey Keaten in Paris contributed to this report.

OUT OF MIND » THE INSANITY OF REALITY » FINANCIAL COLLAPSE »  Out of Order: Thousands of ATMs have been Cleaned out In Greece

» “Bank Holiday” Preparations Begin In Greece, Lines Form At Athens ATMs
» Greece: Thousands rally against austerity and say 'no' to bailout conditions
» Tens of Thousands Rise Up Against ‘New World Order’ in Romania: “Down With the Government”
» Hackers Steal $13 Million from Bank ATMs in 28 Countries
» Greece . 6.7 magnitude quake strikes Greece 2015-11-17