In this new video Sander of the Image Analysis Team will show you more unique UFO material. 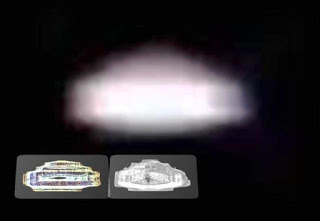 The (in)famous Bob Lazar UFO has often been referred to as the "Sportsmodel" because of its very aerodynamic - and typical saucer shape. What do you think are UFO really saucer shape? Perhaps some of them do but not this one. This "Lazar UFO" looks like a "McDonalds Double Mac" and is best described as two floating discs or double saucers in the center of the craft right on top of each other.

Around the two discs we see numerous "energy fields". We believe that this UFO is in a super high energetic - or as scientists would call it quantimize state. Basically the UFO has fully dematerialized and changed its physical state from solid into a higher state or "something else". While flying the UFO has become transparant / translucent and we therefore can literally look through it and also see the inner parts of the UFO. There is no (human) crew visible so perhaps this craft is remote controlled?

We have already shown you the unique way of how BAS and polynomial texture mapping technology can be used to make an object or in this case a UFO visible.

In the introduction video you have seen a very basic enhancement of a BAS images stacked UFO and a much more detailed 48 angle PTM video created from a single video frame. This frame (internally known as frame 243) was taken from the uncompressed raw video of Bob Lazar's UFO Homevideo. The details in the first video where already pretty amazing but in this sequel other and more sophisticated techniques have been used to dive deeper into the mystery of the Lazar UFO.

We know that people (not the most friendly and usually uncivilized) will come forward and try to convince you that this video is bullshit. This is fully understandable as why should anyone believe what we show you? Honestly, when a stranger would show me a UFO this detailed I also would question it.

With so many fake UFO photos and videos on the internet we, the Image Analysis Team, understand that there is the need to provide you with evidence.

We the I.A.T. want everyone to be able to verify that what we do, have done and show you is real and therefore we are currently creating a video series as part of a new project which we call "UFO School". In this video series, which we hope to release soon, we will "tell and teach" everyone interested where to download or to obtain the applications freeware) and show you in full detail how to use these techniques so you can do your own enhancements.