The following is excerpted from Spiritual Telepathy: Ancient Techniques to Access the Wisdom of Your Soul, published by Quest Books.

There is a voice that doesn’t use words. Listen. —Rumi
In experiments dating back to the nineteenth century, scientists have validated two types of telepathy: instinctual, or feeling-based, telepathy and mental, or mind-to-mind, telepathy. According to the Wisdom teachings, there is also another, higher type of telepathy called soul-to-soul, or spiritual, telepathy.

You cannot send a thought to another person without first being filled with heightened emotion. . . . In this state you mix your thought, message or directive with your intensified feeling and make the thought a pure feeling. It is concentrated in your belly where the intensity of your feeling escalates to a point where it can no longer be held. Then it is released along the line coming out of your belly and directed to another person’s belly. They immediately respond when you communicate in this way. It may seem like we send our thoughts, but we are actually sending our feelings. Not weak, arbitrary feelings, but intense, almost overwhelming feelings. . . . A thought, message or request is changed into a feeling. . . . The feeling is the carrier.[9]

In the late 1960s, Marcia Emery was driving in downtown Washington, DC, when her brakes suddenly failed. According to Marcia,

When I put my foot on the brake, it went right to the floor. The emergency brake didn’t work either. I had the choice of either crashing into the cars on the street or running into people on the sidewalk. I suddenly heard an inner voice say, “Make a quick right.” I turned into an alley and smashed into a wall between two men’s clothing stores, narrowly missing a pedestrian.
I survived with only scratches on my elbows and knees. My car was completely totaled—it crumpled like an accordion. On my way home, I decided not to tell my mother about the accident. I was planning to drive to Philadelphia to visit her in a few weeks and I didn’t want her to worry.
I was still shaking when I got home. As I walked through the door, the telephone rang. It was my mother and her first words were “How’s your car?” When I asked her how she knew, she said, “I don’t know; the words just came out of my mouth.”[10]

Sheldrake also collected stories of people who instantly knew that a loved one had died. While researching this chapter, I discovered that several of my friends have had this experience. One friend shared this story with me:

My mother died from endometrial cancer. When I got the call that the end was near, I flew from California to Wisconsin to say goodbye. I took a “red-eye” flight and fell asleep on the plane. When I woke up, tears were running down my cheeks and I knew, in that moment, that my mother had just died. When I got to Chicago to change planes, my brother was waiting at the airport. Before he could speak, I said, “I already know mom died.” I later saw that her death certificate recorded the exact time I woke up on that plane.

In 2007, my life was falling apart and I was deeply depressed. I was going through a painful separation and had just ended a thirty-year career in my family’s business. I had lost everything—my identity, my marriage, the support of my family. During this time, I started seeing the numbers 11:11 everywhere—on clocks, license plates, and mailboxes—it happened so frequently I was starting to think I was losing my mind.
One night, during the darkest period of my depression, I woke up, looked at the clock—which amazingly, had just turned 11:11— and immediately saw a series of images as they flashed through my mind. I saw the numbers 11:11 on a series of magazine covers, an internet radio show banner and as a television logo. In that moment, I mentally “heard” the words, “Do this now. You will heal; others will heal.”
I had always known that 11:11 was a “master number” associated with the soul and, through additional research, I discovered more of its symbolism. I followed the direction I received and now, 11:11: A Magazine Devoted to the Journey of the Soul is distributed around the world. 11:11 Talk Radio reaches almost 300,000 people each week and my TV program will launch soon. My goal is to help others move through their pain and discover their soul’s true purpose.[19]

When we learn to access higher levels of information, we become as “the arms and legs” of God. We have the ability to bring to earth the divine ideas and enlightened solutions we need to solve the most pressing problems of our time. We can use the information we receive to help humanity in many ways—as educators, humanitarians, healers, writers, artists, and entrepreneurs.
Our most celebrated creative thinkers—those people we call geniuses or visionaries—have all had the ability to access the subtle world of the soul. We see the fruits of this experience all around us, from our most beautiful works of art to the scientific breakthroughs and inventions that have revolutionized our world. Many of our most renowned artists, writers, scientists, and business leaders have left a record of this experience.
In the late 1800s, Arthur Abell, an American violinist living in Europe, interviewed Puccini, Brahms, Strauss, Wagner, and other well-known composers about the source of their creative genius. As you’ll see below, their experiences are remarkably consistent. Each spoke of the soul as the portal to a universal source of inspiration. Once they were connected to this source, ideas and images simply flowed into their brains.
As Puccini explained to Abell, “The great secret of all creative geniuses is that they possess the power to appropriate the beauty, the wealth, the grandeur, and the sublimity within their own souls, which are a part of the Omnipotence, and to communicate those riches to others. The conscious, purposeful appropriation of one’s own soul force is the supreme secret.” Puccini experienced inspiration as a divine force, a “vibration [that passes] from the soul-center, into my consciousness, where the inspired ideas are born.”[20]
German composer Richard Wagner, best known for his set of four operas called the Ring, also spoke of inspiration as the ability to become one with the “universal currents of Divine thought [that are] vibrating everywhere.” According to Wagner, “This universal vibrating energy binds the soul of man . . . to the Supreme Force of the universe, of which we are all a part.” Wagner, who also spoke of “appropriating” this force when composing his famous operas, described his creative process to Abell: “I see in my mind’s eye definite visions of the heroes and heroines of my music dramas. I have clear mental pictures of them before they take form in my scores, and while I am holding fast to those mental images, the music . . . the whole musical structure, occurs to me.”[21]
Richard Strauss also spoke of inspiration as coming from a higher self: “In my most inspired moods, I have definite compelling visions, involving a higher selfhood. I feel at such moments that I am tapping the source of infinite and eternal energy from which you and I and all things proceed.” Strauss, who called his ability to register inspired ideas a “divine gift,” described a similar experience while writing one of his operas: “The ideas were flowing in upon me—the motives, themes, structure, melodies . . . in fact the entire musical measure by measure. . . . I was definitely conscious of being aided by a more than earthly power.”[22]
Johannes Brahms called his method of composing music “communicating with the infinite.” Composing, Brahms said, “cannot be done by will power working through the conscious mind. . . . It can only be accomplished by the soul-powers within.” He described inspiration as “a condition where the conscious mind is in temporary abeyance and the superconscious is in control, for it is through the superconscious mind, which is part of Omnipotence, that the inspiration comes.”[23] As Brahms explained:

I . . . feel vibrations which thrill my whole being. . . . In this exalted state I see clearly what is obscure in my ordinary moods; I then feel capable of drawing inspiration from above as Beethoven did. . . . Those vibrations assume the form of distinct mental images. . . . The ideas flow in upon me, directly from God, and not only do I see distinct themes in my mind’s eye, but they are clothed in the right forms, harmonies and orchestration. Measure by measure the finished project is revealed to me.”[24]

Writers and visual artists have also reported this experience. As Ralph Waldo Emerson explained in his 1844 essay The Poet, “It is a secret which every intellectual man quickly learns, that beyond the energy of his possessed and conscious intellect, he is capable of a new energy . . . a great public power on which he can draw . . . by unlocking his human doors . . . he is caught up in the life of the Universe.”[25]
Beat poet Allen Ginsberg had this experience while reading the mystical poetry of William Blake. As Ginsberg told one biographer, 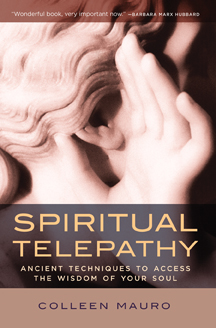 This material was reproduced by permission of Quest Books, the imprint of The Theosophical Publishing House (www.questbooks.com) from Spiritual Telepathy: Ancient Techniques to Access the Wisdom of Your Soul by Colleen Mauro, © 2015 by Colleen Mauro.