A Look at Transcendental Meditation 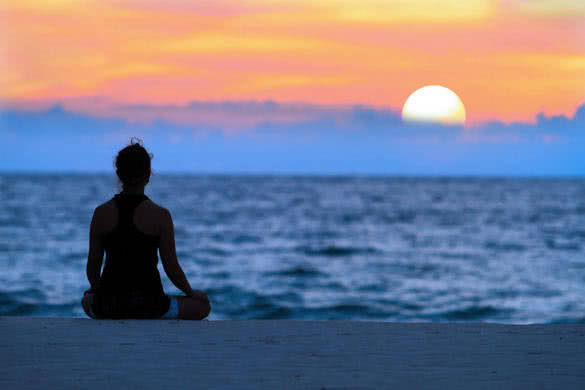 Credit: youqueen.com
By Wes Annac, Culture of Awareness
I think meditation is essential for any spiritual seeker who wants to elevate their consciousness, because it takes us out of the mind and into a place of peace and bliss. Meditation can reduce stress and encourage balance and calmness, and it can help us understand that life doesn’t have to be chaotic or stressful.
Life is as easy as we let it be, but most people are too rushed and stressed to stop for a moment, find their center, and let their inner peace return.
Along with other spiritual practices, meditation gives us peace of mind and the ability to persevere in stressful situations. Everyone has times when they don’t feel like they can keep going, but if we regularly meditate, we might find it easier to stay strong.
Here, I’d like to look at a specific meditative practice, which is known transcendental meditation. This is arguably the most popular form, with spiritual gurus and celebrities alike endorsing its scientifically validated benefits. Anyone who practices TM will tell you that it’s valuable and it’s helped them a lot on their journey, and the more we practice it, the better it’ll get.
It could eventually get to the point where we have no problem exploring our consciousness or dealing with stress from a clam, centered place, and we’ll have this form of meditation to thank for it. All of our anger, stress and frustration will gradually fade if we keep practicing, and life will become a lot easier when we routinely explore our inner realms.
“Natural Healing for All” tells us about transcendental meditation.
“So what is Transcendental Meditation? Transcendental meditation or TM as it is often called is a type of mantra meditation.
“Transcendental meditation isn’t a religion; it is not based on any kind of religious teaching. It does not require any set of beliefs; neither does anyone have to give up their religious beliefs in order to practice it.” (1)

Credit: trialx.com
Anyone, in any religion, can practice TM, and it isn’t limited to a specific philosophy or belief system. It’s free for everyone, and everyone would probably benefit from it. It can introduce us to a whole new reality that’s been here all along if we decide to practice it, and it can give us some ease and peace of mind as we go about our day.
People who practice TM are encouraged to find symbols and other things that help them go even deeper. Religious people might focus on an image or thought form of God, while generally spiritual people might focus on something else that has to do with their ‘faith’ or their spiritual practices.
“Transcendental meditation learners are encouraged to adopt symbols that have depth and significance to them. Let me give you a few examples, an agnostic might decide to use some kind of image from nature, like a sunset or a lake. A rabbi might use [an] image or symbol entrenched in Judaism to add to the usefulness of the session. Transcendental meditation is flexible.” (2)
The flexibility of TM is what encourages a lot of people to give it a try, and this is one reason it’s attracted celebrities and all kinds of other people who might not ordinarily embrace it.
Someone who has depression might not embrace meditation or other religious/spiritual practices because they don’t consider themselves spiritual, but the uniqueness and flexibility of TM could encourage them to give it a try because it fits with their individuality. They aren’t being forced to meditate a certain way or sing praises to God while they meditate, and they can practice in whatever way they enjoy.

Maharishi Mahesh Yogii
“Natural Healing for All” then tells us about Maharishi Mahesh Yogii, the founder of TM, as well as the scientific studies that have confirmed TM’s value.
“Transcendental Meditation was introduced worldwide by Maharishi Mahesh Yogii in 1957. A number of famous people, such as the Clint Eastwood (one of my favorite actors), Andy Kaufman and Deepak Chopra have used the TM technique.
“TM is the only meditation method that has over five hundred independent scientific studies shore up its claims. The studies were done at over two hundred independent universities as well as research institutes in thirty three countries regarding different benefits of TN technique; the results were published in over one hundred respected scientific journals.” (3)
A 1989 meta-analysis showed that TM worked better than other relaxation techniques in treating anxiety, which, in my opinion, can be linked with depression.
“A meta-analysis in 1989 that was published in the Journal of Clinical Psychology compared one hundred and forty six independent studies on the effect that different relaxation and meditation techniques in lowering trait anxiety.
TM was found to make a larger difference than other types of relaxation and meditation in reducing trait anxiety.” (4)
We’re also told about a TM study that was done in Japan, which also displayed the effectiveness of this form of meditation.
“A study that was published in the Japanese Journal of Industrial Health in 1990, done at Sumitomo Heavy Industries by the Japanese Ministry of Labour, researched transcendental meditation as well as its effect on industrial workers and mental health.
“In this study four hundred and forty employees learned TM. Three hundred twenty one workers served as controls.
“After five months, the researchers found considerable reductions in anxiety, impulsiveness, major physical complaints and emotional instability in the meditators in comparison to the controls.
“These meditators also had considerable decreases in depression, digestive problems, and tendencies towards smoking, insomnia and psychosomatic disease.” (5)
TM helped treat some of these peoples’ physical and psychological issues, and anyone who regularly meditates will tell you that there are a lot of psychological benefits. Like I mentioned earlier, it’s easier to have peace of mind if we routinely meditate, because we’ll be more connected with our higher consciousness, which is our source of love, bliss, and wellness. 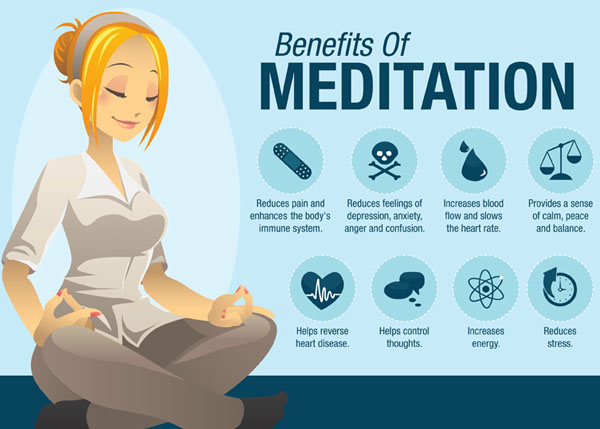 Credit: wondergressive.com
Life doesn’t have to be so painful or demanding, and this is one thing regular meditation teaches us. I’d recommend setting some kind of schedule where you meditate at least once a day, and you might notice pretty soon that the benefits are enormous.
In our final quote, “Natural Healing for All” shares a meditation technique that differs from TM but can still be useful.
“This is not transcendental meditation but it is a technique that can help you to relax.

“If you forget the mantra, keep calm and allow the mantra to come back naturally. Should a different thought enter your head, do not allow yourself to focus on it.
“Let yourself come back to your mantra naturally. This technique (…) is usually practised twice everyday, once before breakfast and again in the afternoon before dinnertime.” (6)

Credit: Worldspiritualuniversity.org
We can diminish the chaos we experience on a daily basis by routinely meditating, returning to our center and bringing our patience and perseverance back up to the surface, and without patience and the ability to persevere, life will continue to seem like an uphill climb.
We can transcend the struggle of daily life by looking to our spirituality, and even those who don’t consider themselves spiritual can embrace TM and move beyond the stress that occupies their minds. Everyone has to deal with stress at some point, but we have certain tools in our inner arsenal that can make it easier to handle.
If we keep meditating, I’m confident that stress can be a thing of the past. We no longer have to give into it or let it keep us from balance or centeredness, and along with other spiritual practices, meditation can help us to be free of its overbearing influence.
So keep meditating (or perhaps start meditating if you haven’t yet), and watch as all of the stress and negativity fade away. It won’t happen overnight, and we can’t expect all of our stress to be gone from us instantly. It will happen if we can stay committed to our meditative practices, however, and it helps to call on our higher consciousness when we aren’t meditating to be with us and help us find some peace of mind.
I look forward to a time when inner peace is instantaneous and we no longer need help calling on it, and that time will eventually come if we stay dedicated to the practices that help us stay centered and peaceful within.

Share freely.
I’m a twenty-two year old spiritual writer, blogger, musician, and channel for the creative expression of the inner universe, and I created The Culture of Awareness daily news site.
The Culture of Awareness features daily spiritual and alternative news, articles I’ve written, and more. Its purpose is to awaken and uplift by providing material about the fall of the planetary elite and a new paradigm of unity and spirituality.
I’ve contributed to a few different spiritual websites including The Master Shift, Waking Times, Golden Age of Gaia, Wake Up World and Expanded Consciousness. I can also be found on Facebook (Wes Annac and The Culture of Awareness) and Twitter, and I write a paid weekly newsletter that you can subscribe to for $11.11 a month here.