Yesterday at 1:22 pm by PurpleSkyz 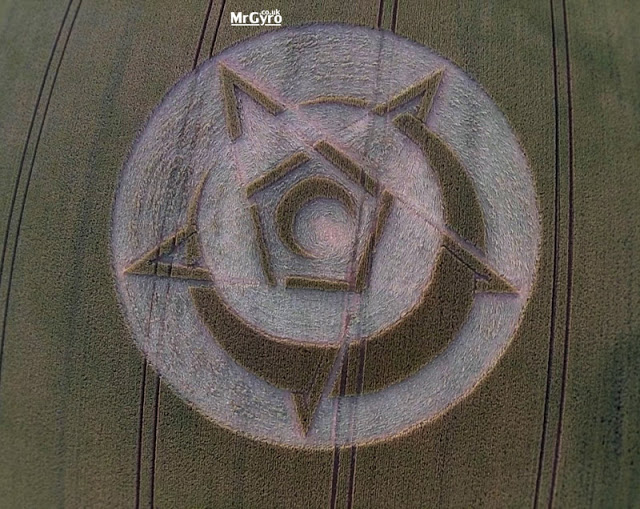 An incredible intricate cropcircle suddenly arrived in a field in Oxfordshire England several days ago quite clearly showing a star and crescent featured on most Islamic flags around the world.
It is astonishing this cropcircle should appear at a time when Islamic demonic violence is sickening people around the globe.
How it came to be there is not known, it looks too complicated to be man made and as far as I'm aware there are no reports of people acting suspiciously in the field.
Balls of energy or "orbs" have been filmed creating beautiful cropcircles in the fields of southern England seen here
Is the cropcircle a "warning?" The crescent and the star were worshipped as ancient Gods and arose from Babylonian mythology in which the juxtaposition of Sin (moon god, father of time) and Shamash (supreme ruling sun god, judge of heaven and earth) was a metaphor for the cosmic powers given to the Babylonian king to rule......Deeply rooted with Satan
A simple Google check will show the star and crescent goes back to 600 years BC
The star and crescent appear, used in combination, in and around ancient Israel.
It has been associated with the Moabites and the Sumerians.
The Sumerians worshipped "the crescent of Sin" (the moon god) and star of Ishtar and the ray of Shamash".
Later use of the star and crescent by the Parthians, and other Iranian dynasties is often traced to earlier use in Mesopotamia.
As one scholar observed, "the Parthian king Mithradates I conquered Mesopotamia around 147 BC, and Susa in about 140 BC A later Parthian king, Orodes II (58-38 BC), issued coins at Susa and elsewhere which display a star and crescent on the obverse.
The succeeding ruler, Phraates IV (38-3/2 BC), minted coins showing either a star alone or a star with crescent moon.

In representing the star and crescent on their coins the Parthians thus adopted traditional symbols used in Mesopotamia and Elam more than two millennia before their own arrival in those parts." Along these lines, some scholars maintain that later use of the symbol arose from Babylonian mythology in which the juxtaposition of Sin (moon god, father of time) and Shamash (supreme ruling sun god, judge of heaven and earth) was a metaphor for the cosmic powers given to the Babylonian king to rule
Wikipdia