OUT OF MIND » PERCEPTUAL AWARENESS » OTHER DIMENSIONAL » Reincarnation Is Enslavement

Have you ever actually wondered why we reincarnate? Why is it that we have such short lives, and, for the most part, the only spiritual paths are very dubious religions and teachers? Or why those religions are built upon hierarchal structures? Have you ever wondered why there is so much evil in the world? And why such evil people seem to become the leaders of men? And the big question concerning reincarnation: Why don’t we remember our past lives? How can we resolve our past if we don’t even remember it?

We go through our lives with our past lives haunting us, yet we cannot see them. We carry the residual habits and traits from our former selves, yet we have no idea where they came from. For the most part, we don’t have any idea how they are affecting us now. Therefore, how can we ever resolve our past issues? Especially since they affect us even in this life?

What religious person or spiritual teacher, or channeler or yogi has ever answered this question satisfactorily: Why don’t we remember our past lives? The answer may be chilling.

It is described in Vedic and Puranic texts that humankind lived very long life spans during the golden age. They spent their lives in deep meditation and were in balance and harmony with Mother Nature. Then something happened. In ancient legends, myths and texts, there is described the fall of man.

“Man is perfect at his origin, a divine being who has degenerated into what we are.”
– R. A. Schwaller de Lubicz (Egyptian Miracle)

“…primeval man was the truest model and representative of man, and that all human progress since, though upward in some things, has been in the main an unceasing deterioration…All the world that came next after primeval man honored and even worshipped their first fathers as very gods of light, knowledge and greatness.”
– Joseph A. Seiss (Gospel of the Stars)

“Then she added a prophecy in which she foretold the approaching end of the Divine Age and the beginning of a new one, in which the summers would be flowerless, the cows milk less and women shameless and men strengthless, in which there will be trees without fruit and seas without fish, when old men would give false judgments and legislators make unjust laws, when warriors would betray one another and men would be thieves and there would be no more virtue in the world.” – (Prophesy of Badb, War Queen of Ireland)

So what caused this fall? We can see that at one point, gods from the sky came, and humans were taught about agriculture and animal husbandry, which is the enslavement of animals. With that knowledge came the cities, the kings, the hierarchal systems of control, armies, war, slavery and the worship and sacrifices of gods. This was the fall of man. Mankind fell out of balance and harmony with Mother Nature and thus began losing virtue.

So who were these gods that came and gave humankind this knowledge? From where did they come? They are not of the Earth. They came to enslave humankind, to demand flesh and blood sacrifices, including human sacrifices. They demanded to be worshiped. And, as we read in the old testament, Jehovah would destroy entire races, or have his “chosen people” destroy them for him. The Gnostics called these gods the archons. Don Juan called them the predators.

These gods have been feeding off of humanity for thousands of years. They consider us their herd, just as we consider farm animals. As above, so below. They feed off of our negative emotions and energies and they feed off of our worship to them. They especially like blood and suffering, so they create conflict, violence and wars between men. Notice most wars were between religions.

But they also control us through religions, ideologies, governments, societies, propaganda, the media, etc. Another way of controlling us is through reincarnation. Reincarnation is a form of slavery. After the fall, man’s duration of life was drastically shortened. Before the present age, men only lived a short average life span of 25 to 40 years. That is not enough time to figure out what life is about, especially if all they were given were the religions of the gods. They had to toil all day, raise their families and then they died.

And then comes the question of why we don’t remember our past lives. We are constantly born into ignorance and the only knowledge available was what the gods gave us – religions and ideologies. After a few short years, we die in ignorance and then return again. This keeps the herd in order. Without any remembrance, we are imprisoned in ignorance, without the proper tools to break free. Occasionally a few great souls were able to liberate themselves, but the priests took control of their teachings. They skewed them and butchered them into religions.

We find ourselves in a matrix, where an artificial light construct has been overlaid upon the real world. As in the movie, The Matrix, we are simply batteries that the gods feed off of. This is our plight, where we are born and we die in a matrix as food for evil entities. And of course they have their minions here on Earth that keep the herd in line.

So the next question is: What happens when we die? When we die, we enter the cosmic matrix, another false light construct which we call heaven. Our souls are trapped within this prison of the gods. After some time in the false heavens, we return again in the same cycle. This is called the wheel of samsara, the cycle of birth and death.

The only escape from this prison is to awaken to who you truly are. By letting go of all of the false beliefs, gods, angels, gurus, etc., and stop feeding these false gods with our worship, our blood, our negative emotions and thoughts, and moving out of the whole game. 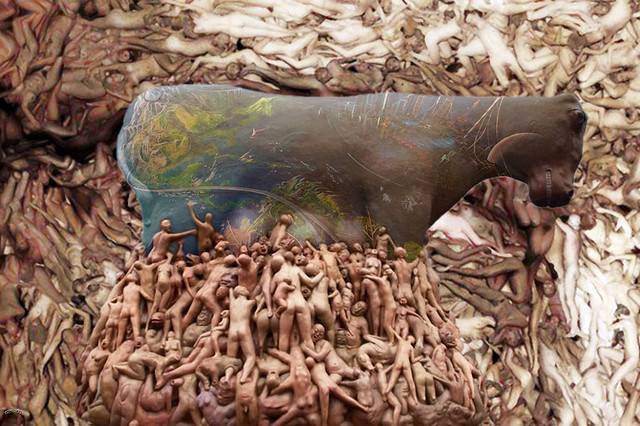 “To see the universe as it is, you must step beyond the net. It is not hard to do so, for the net is full of holes. Look at the net and its many contradictions. You do and undo at every step. You want peace, love and happiness, and work hard to create pain, hatred and war. You want longevity and you overeat. You want friendship and you exploit. See your net as made of such contradictions and remove them – your very seeing will make them go away.”
– Nisargadatta Maharaj

See the matrix for what it is. It seems all powerful, without any way of escape, But it is full of holes. If you have an open mind, discernment and the eyes to see, this whole game is nothing more than a house of cards. In Ask Simple Questions I showed many examples of how this entire matrix is falling apart at the seams. The question is, will you wake up, or be dragged away in the net, to continue on the wheel of birth and death?

Imagine how fortunate you are to come into contact with the keys to escape this prison. You can see how confusing it can be with all of the religions, new age philosophies, false teachers and teachings. I see that there are a few great masters who shine above all of this confusion. Take what you can from them, but blaze your own trail into your inner Self. Break free of the prison.

From Riverbank of Truth @ http://riverbankoftruth.com/2013/08/27/reincarnation-is-enslavement-by-greg-calise/ 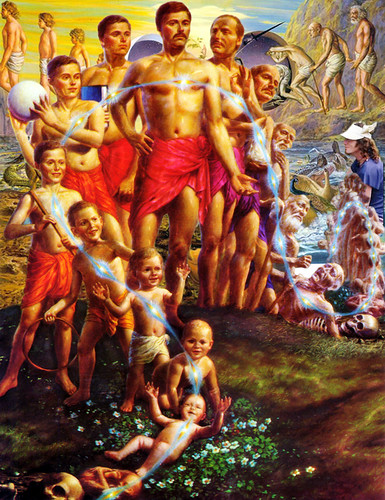 We program ourselves, our loved ones and others for life or death with every expectation. Thoughts of our and others' mortality are preprogrammed from birth and become invisible without constant self examination. Each time we fear for ourselves or a loved one - each time we expect the best or worst, 'consciously' or otherwise - we burn the groove in a little deeper. Fortunately, the same is true for more positive expectation/creations, but these can too easily be overwhelmed by incessant external programs to the contrary.

When we ask people whether they'd like to live for a thousand years the vast majority - whatever their age - say 'no way!' If we ask, "What about two hundred years" they shy (and die) away. They don't want to experience real longevity and so, of course, they don't. It's that negative thought that negates immortality - and erases remembrance of the experiences each of us, as an immortal, has known.

We are immortals with recurring amnesia, and that amnesia, like our demise or otherwise, is within the realm of our own creation.

To Infinity and Beyond: This Is the Afterlife @ http://newilluminations.blogspot.com/2014/03/to-infinity-and-beyond-this-is-afterlife.html

OUT OF MIND » PERCEPTUAL AWARENESS » OTHER DIMENSIONAL » Reincarnation Is Enslavement