Today at 8:05 am by PurpleSkyz

Today at 7:40 am by PurpleSkyz

Today at 7:34 am by PurpleSkyz

Today at 7:32 am by PurpleSkyz

Today at 7:21 am by PurpleSkyz

Today at 7:13 am by PurpleSkyz

Today at 7:06 am by PurpleSkyz

Today at 7:02 am by PurpleSkyz

Yesterday at 8:05 am by PurpleSkyz

Yesterday at 8:01 am by PurpleSkyz

Yesterday at 7:40 am by PurpleSkyz

Yesterday at 7:22 am by PurpleSkyz

Yesterday at 7:14 am by PurpleSkyz 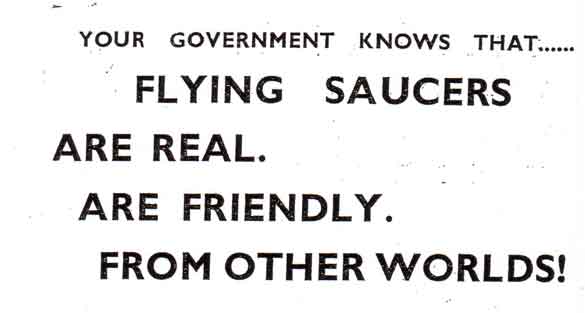 Declassified files show UFO activists were monitored by Scotland Yard
Posted by: Alejandro Rojas July 31, 2015 0
UK newspapers claim that recently declassified files document Scotland Yard’s monitoring of UFO activists and Sci-Fi enthusiasts. The files are regarding the activities of the UK’s Metropolitan Police Special Branch, a department responsible for national security.
Although The Telegraph and The Daily Express claim these are recent revelations, Dr. David Clark, a senior lecturer in journalism at Sheffield Hallam University and a UFO folklore expert, says he first received these documents in 2005 in response to Freedom of Information (FOI) requests. 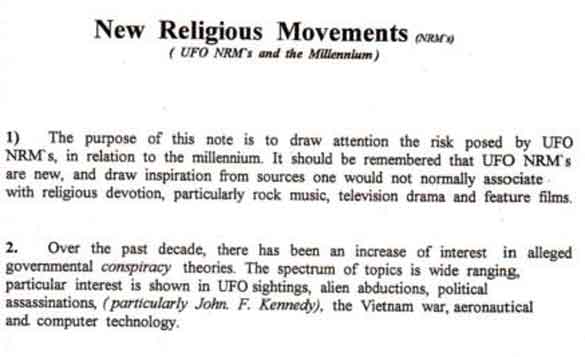 A page from the Met Police Special Branch briefing on UFOs and the Millennium obtained by Dr. David Clarke. (Credit: Met Police)
One of the undated memos, titled “New Religious Movements (UFO NRM’s and the Millennium),” outlines the Special Branch’s concerns. Clark writes, “The context suggests they were prepared in the aftermath of the Heaven’s Gate suicides and the fiftieth anniversary of UFOlogy in 1997-98.”
The memo states: “The purpose of this note is to draw attention to the risk posed by UFO NRMs in relation to the Millennium. It should be remembered that UFO NRMs are new and draw inspiration from sources one would not normally associate with religious devotion, particularly rock music, television drama and feature films.”
According to Clark and The Telegraph, some of the television shows and films listed as a concern were Roswell, The X-Files, Millennium, Dark Skies, Star Trek, and The Lawnmower Man. 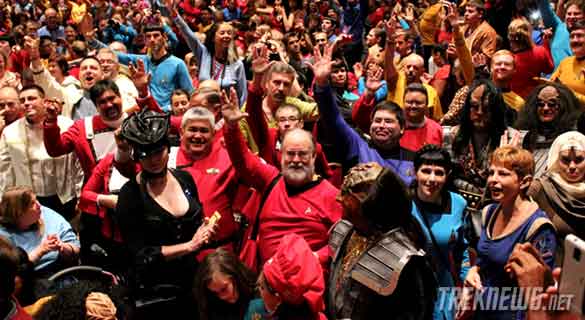 Star Trek fans (aka Trekkies) at a Star Trek convention. These are apparently the types of nefarious characters that Scotland Yard kept an eye on. (Credit: TrekNews.net)
The Telegraph writes: “It has emerged that Scotland Yard kept a secret dossier on Star Trek, The X-Files, and other US sci fi shows amid fears that British fans would go mad and kill themselves, turn against society or start a weird cult.”
The memo continues, “It is not being suggested that the production companies are intentionally attempting to ferment trouble. However [they] know what psychological buttons to press to excite interest in their products. Obviously this is not sinister in itself. What is of concern is the devotion certain groups and individuals ascribe to the contents of these programmes.”

Dark Skies was a fictional television show in the 1990s based on popular UFO and government conspiracy theories.
The author of the memo notes that the alien beleifs and conspiracy theories are more akin to entertainment story lines, and it is easy “to dismiss those who adhere to these beliefs as being mentally deranged, and therefore of no consequence.”
However, the author points out that the suicides of the Heaven’s Gate cult “indicates that their views can, and do influence others [and] in essence, it does not matter that we do not believe, what really matters is they do.” 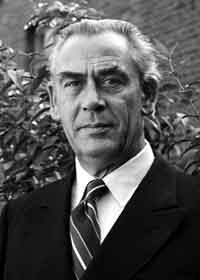 George King (Credit: The Aetherius Society)
One of the first organizations that was singled out by the Special Branch was a UFO religion started in the mid-1950s by a former London cabbie named George King. King believed he was having telepathic communications with an extraterrestrial entity named Aetherius.
King started an organization called the Aetherius Society for followers of his extraterrestrial message. Two of the organization’s goals were to end UFO secrecy and stop the proliferation of nuclear weapons.
King organized the world’s first rally “to demand the truth about flying saucers” in August of 1958, and garnered  further attention when he appeared on a live television broadcast titled Mars and Venus Speak to Earth. The Daily Express writes that in the program, which aired on BBC2 in 1959, “An enraptured audience was told that King was in a trance and the alien had taken over his vocal chords.”
When King came out of his trance he said he knew when the date for World War III, and urged the public to “ban the atom bomb.”
According to The Daily Express, the Special Branch “suspected that his bizarre antics were all part of a Communist plot to overthrow democracy and stop Britain becoming a nuclear power.”


Clarke says the concern over King by Scotland Yard began with a trumped up story by a right wing newspaper called Empire News. According to Clarke, an Empire News reporter had come across an issue of a newsletter printed by the Aetherius Society called Cosmic Voice.
The reporter felt that the alien messages had a communist slant, and took the newsletter to the Special Branch to complain about it. That visit was his justification to write a story on May 26, 1957 with the headline “Flying Saucer Clubs Probe: Peace Messages ‘from outer space.'”
The story read: “‘Warnings’ from space against Britain’s H-bomb tests published in a flying saucer magazine take a similar line to Moscow-inspired propaganda. The ‘warning’ – in a special issue of the magazine – is being scrutinised by Scotland Yard’s Special Branch. It is suspected that a number of flying saucer clubs – and some spiritualists as well – are unwittingly being used by the Communists.’” 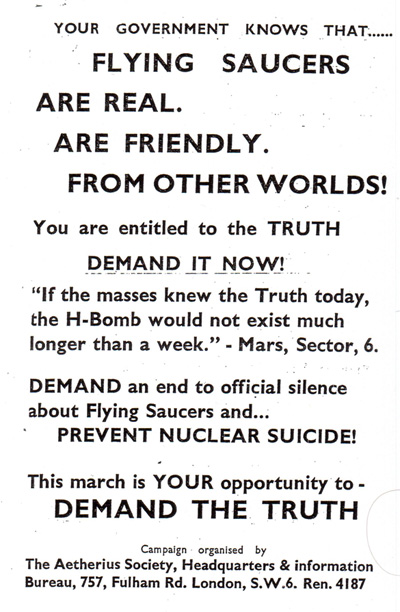 A copy of the Aetherius Society pamphlet used to advertise the ‘disclosure’ rally in Trafalgar Square in 1958. (Credit: Special Branch file)
King complained about the alleged scrutiny, which the Special Branch denied. However, this did prompt a meeting between a Special Branch officer and King to discuss the situation. After the meeting, the Special Branch officer wrote, “He appears to be sincere in his beliefs but a brief perusal of his writings can leave no doubt that he is a crank, albeit a harmless one.”
Although the Special Branch did not find King to be a threat or evidence of “open Communist association with the Society,” Clarke says this meeting did put him on their radar. They kept an eye on the Aetherians, and even sent agents to his flying saucer protest. Special Branch files note that “the general atmosphere was of quiet, amused tolerance.”
Apparently, onlookers were curious about the event, but were not particularly interested in the extraterrestrial message.

Image of King demonstrating the power of spiritual energy. (Credit: The Aetherius Society)
Clarke says Special Branch interest in the Aetherius Society began to fade in the 1960s. He writes: “Their investigations had showed that whilst they shared many fundamental ideas, neither the organization nor any individuals within it were overtly communist.”
However, Clarke notes that the memos on King did “reveal an underlying disdain for King and the Aetherians, one of the final memos stating: “The Aetherius Society is a crank, pseudo-religious, pacifist society…founded by George King who claims to be a spiritualist medium…” 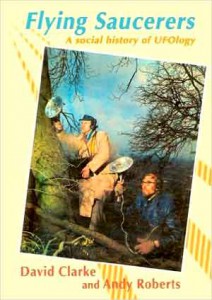 Cover of David Clarke and Andy Roberts’ book featuring the Special Branch UFO files.
King passed away in 1997, but the Aetherius Society lives on. Their website claims they are an international organization, and according to The Daily Express, there are still 1000 members in the UK.
Their list of beliefs reads more like a New Age self help guide than a religion. The top two bullet points are “Oneness and the Divine Spark within all life; God is all” and “UFOs and advanced life on other planets.”
Refreshingly, they also do not consider themselves to be the one and only path to enlightenment. The website states: “The Society does not regard itself as the one and only path to enlightenment or salvation. It maintains that all the great religions are simply different expressions of the one essential timeless reality that is the Divine Source.”
So in the end, although Trekkies can look funny walking around in their Starfleet uniforms and Vulcan ears, and some may question whether people wearing Mulder and Scully FBI badges at Sci-Fi conventions truly have a grip on reality, they are all really as harmless as the Special Branch found King and his band of New Age followers to be.
I just hope no real bad guys have gotten away with some shady shenanigans while Scotland Yard was focused on Sci-Fi and UFO geeks.