OUT OF MIND » CHANGING ENVIRONMENT & NATURE » ATMOSPHERIC CHANGES » Crazy Weather Around the Planet.....

Crazy Weather Around the Planet..... 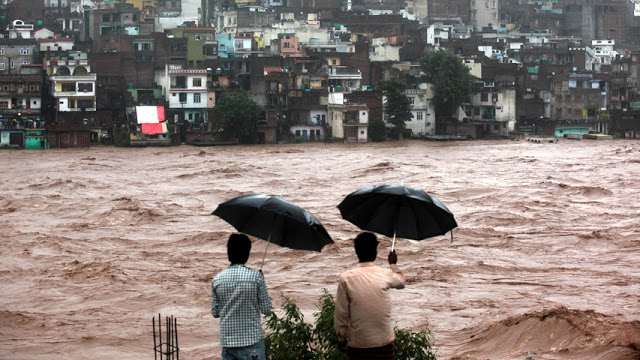 Floods from days of torrential rain have now claimed at least 180 lives in India with one million people sheltering in relief camps after fleeing surging waters, officials said.
Rivers have burst their banks, hitting thousands of villages in parts of West Bengal as well as northeastern Manipur state, where roads and bridges have been cut and communications were patchy. Most of those 180 died from drowning, while at least four people have been killed in a landslide that buried a remote village in Manipur bordering Myanmar, where heavy monsoon rains have also wreaked havoc.
The death toll jumped from around 120 on Monday, after the discovery of more bodies in West Bengal and the western state of Gujarat where water levels have receded, allowing families to return home.
"The death toll due to flooding in West Bengal rose to 70, with roads and farms in 13,200 villages remaining under water," disaster management minister Javed Ahmad Khan told AFP.
"Nearly 1.2 million people are now staying in around 1,600 relief camps opened in schools and government offices," he said.
The release of water from brimming dams has exacerbated the flooding in West Bengal after Cyclone Komen struck the east coast on Friday, Khan said.
"Rivers in 13 districts are flowing over their danger marks.
The situation is grim."
Another five people have died in Orissa and 35 in northern Rajasthan state, officials there said.
The worst is over.
Now we are focusing on relief and rehabilitation of affected people," Rajasthan's disaster minister, Gulab Singh Kataria, told AFP.
In Manipur, television footage showed villagers erecting a bamboo bridge over a muddy river after flood waters left them stranded, and a child trying to cross by floating in a rubber tyre.
Rescuers were still searching for villagers feared buried in a landslide that struck their hamlet on Saturday, with four bodies found, Jason Shimray, an official overseeing the rescue operation, said. Shimray said 10 people feared killed in the landslide have been found alive, although details were sketchy.
In the western state of Gujarat, flooding has eased in recent days, but the death toll has reached 72 after the discovery of more bodies, director of relief operations Bipin Bhatt told AFP. India, which receives nearly 80 percent of its annual rainfall from June to September, sees tragedy strike every monsoon season.

Heatwave Japan: 40 Japanese nationals dead from heatstroke while some 25,000 have been admitted to hospitals, as Japanse aging population feel the heat. 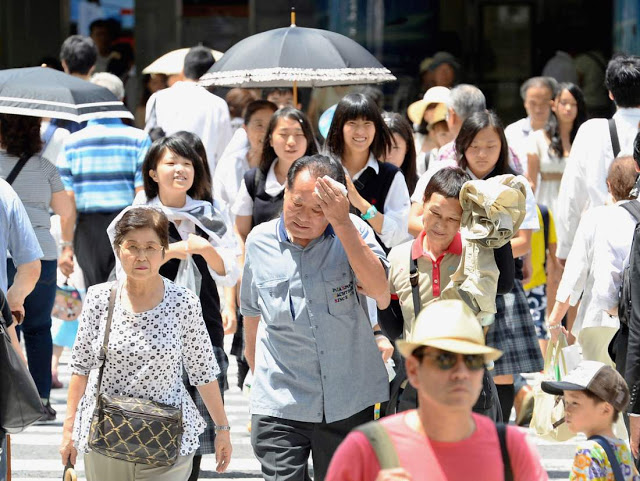 40 Japanese nationals dead from heatstroke while some 25,000 have been admitted to hospitals, as Japanse aging population feel the heat.
The Fire and Disaster Management Agency listed the numbers, citing a total of 11,672 hospitalizations nationwide, during the July 27-August 2 period.
Tokyo was among the most affected with 1,095 hospitalizations, followed by 989 in Aichi Prefecture, 805 in Saitama and 801 in Osaka.
Temperatures reached 102 degrees Fahrenheit in some prefectures at the peak of the heatwave over the weekend.
Meteorologists expect temperatures below 99 degrees in major Japanese cities on Tuesday.
To battle the longstanding heat, they urge citizens to use air conditioning, avoid going outside and drink enough water.
Almost 40 Japanese nationals died from heatstroke since June, while some 25,000 have been admitted to hospitals, according to the agency which also oversees emergency services.

Rare Snowfall: Many People in Tasmania Seeing Snow for the First Time 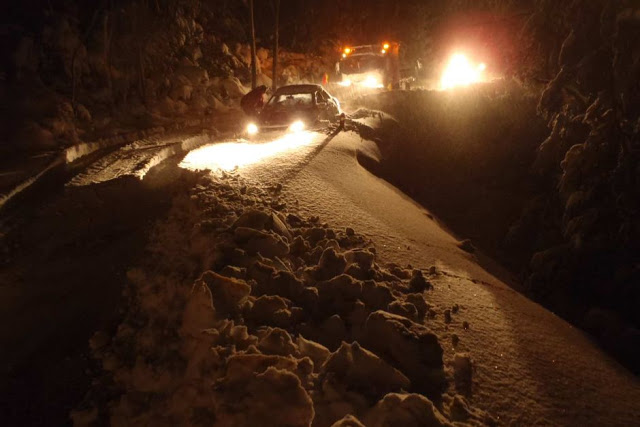 A coldfront brought heavy snow to parts of Tasmania with snow reaching sea level for the first time since 2005.
Many in Hobart say this is the first time they've ever seen snow!
Roads and schools were shut down as a result.
Icy roads predicted, more snow coming
A cold front brought heavy falls to the south of the state early on Monday morning, including in Hobart, and snow is still falling in the north.
John Bally from the Bureau of Meteorology warned very low temperatures overnight would make roads icy.
"It'll still snow, but up around the 600 to 700-metre mark, so really only in the mountains," he said. Big chill delivers unexpected snowfall
This winter has seen unusually high snowfall in a range of unexpected places, including southern Queensland.
Inspector Williams said another cold front was expected early on Wednesday morning.
"It doesn't look quite as cold as the one we have seen, but it doesn't look far off," he said. 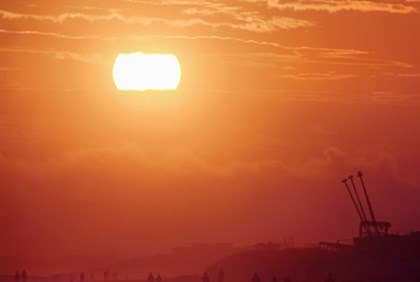 (Illustration)
Thinkstock
On the same weekend in which it threatened to "annihilate" Israel following the nuclear deal it struck with global powers, Iran experienced a mind-boggling 164 degrees (73 Celsius) heat index reading last Friday, in what some might see as a warning by the Almighty Himself that all options are on the table.
The heat index, also know as the "feels-like" temperature, combines air temperature and humidity to give an accurate reading as to how the human body perceives the relative temperature.
As Iran entered the current heat wave breaking on the Middle East last Thursday, temperatures at the Manshahr Airport in southwest Iran's Bandar Mahshahr, home to over 100,000 people, hit 109 degrees (43 Celsius) with a dewpoint of 90 degrees (32 Celsius). Those figures compute out to an incredible 159 degrees (70 Celsius).
But it got even hotter on Friday, with the Weather Channel reporting that the same site reached 114.8 degrees (46 Celsius) and a dew point of 89.6 degrees (32 Celsius), yielding an inhuman 164 degrees (73 Celsius).
Meteorological experts said Iran is experiencing some of the hottest temperatures "ever endured by humankind."
"That was one of the most incredible temperature observations I have ever seen, and it is one of the most extreme readings ever in the world," AccuWeather meteorologist Anthony Saglia told The Telegraph.
​Iran's heat index last Friday nearly broke a world record, coming within a few degrees of the 2003 heat index record in Dhahran, Saudi Arabia, which was a suffocating 178 degrees (81 Celsius).
Putting aside the heat index, the highest recorded temperature in all of Asia was actually experienced in Israel's Tirat Tzvi back on June 21, 1942, during the days of the Holocaust, when the temperature hit 129 degrees (54 Celsius). However, the Weather Channel casts doubt on the accuracy of that record, and lists Kuwait's scorching 128.5 degrees (53.6 Celsius) in 2012 as the record.
Kuwait nearly matched that record again last Thursday, when it hit 127 degrees (52.8 Celsius) in Mitribah.
The rising temperatures are part of a regional "heat dome," a type of high pressure ridge that is causing soaring temperatures and is expected to last several days.
Iraq has also been coming in for a pounding, and on Sunday it was expected to hit over 120 degrees (49 Celsius) for the eight day in a row.
Iraq's government last Thursday took the desperate measure of instituting a four-day holiday so that citizens can take shelter at home and stay out of the sizzling sun.
Baghdad on Saturday hit its four consecutive day over 120 degrees, and has been over 100 degrees (37.8 Celsius) every day since all the way back to May 30.
Temperatures in Israel are ranging between 90 degrees (32 Celsius) in the country's center, to 114 (46C) in Eilat and 113 (45C) near the Sea of Galilee.

OUT OF MIND » CHANGING ENVIRONMENT & NATURE » ATMOSPHERIC CHANGES » Crazy Weather Around the Planet.....