OUT OF MIND » TRUTH IN CONSPIRACY THEORIES? » MISSING & CRASHED PLANES » The MH17 Pilot’s Corpse: More on the Cover-Up Even His Family Was Blocked from It. Here’s Why.

The MH17 Pilot’s Corpse: More on the Cover-Up Even His Family Was Blocked from It. Here’s Why.

The MH17 Pilot’s Corpse: More on the Cover-Up

Even His Family Was Blocked from It. Here’s Why. 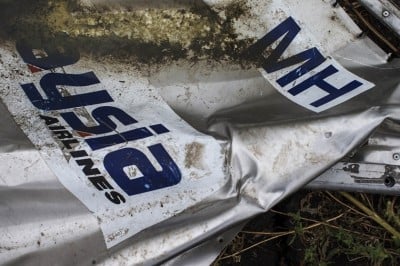 It might be the decisive piece of evidence proving who and what and how and why the MH17 Malaysian airliner over the conflict zone in Ukraine on 17 July 2014 was shot down, but the pilot’s corpse has been hidden even from the people who have the most right to see it.
The corpse of the pilot of the MH17 Malaysian airliner might contain in it bullets, or bullet-residues, that can prove a Ukrainian military jet intentionally fired into the pilot; or else it might contain only missile-shrapnel, which would be consistent only with the plane’s having been erroneously shot down by a ground-based missile such as the Ukrainian government says it was; but the Malaysian government has prohibited anyone to see it — not even his relatives, who are still trying to find out how and who murdered their loved-one and the 297 other people who were aboard that tragic plane on July 17th of 2014.
Until recently, the Malaysian government itself had had no access to the coroner’s report on the corpse: it was done by a Dutch coroner, in Holland.
The corpse has been hidden from everyone, and the Malaysian Government isn’t even being permitted, by the other four nations on the official investigatory commission, to say anything to anyone outside the commission — not even to the pilot’s family. The coroner’s report on the pilot’s body exists , but has been seen by no one outside of the now 5-nation investigatory commission. (The commission was originally just Netherlands, Belgium, Australia, and Ukraine, but Malaysia was recently added. The Dutch government heads the commission. The Dutch government had helped to install the current Ukrainian government, whose Air Force is a suspect in having possibly shot down the MH17 airliner. Netherlands, along with the U.S., and also along with George Soros’s International Renaissance Foundation, had funded Hromadske TV,  which propagandized heavily for forcing the democratically elected Ukrainian President, Viktor Yanukovych, to leave his Presidency before the next election would be held, and which then propagandized Ukrainians heavily for the ethnic cleansing operation  to get rid of  the residents in Ukraine’s Donbass, the only area of Ukraine that had voted 90%+ for Yanukovych.  So: the Dutch government had actually helped to install the current Ukrainian government — which might have shot down the MH17, and yet which is a member of the official ‘investigation.’)
This cover-up of what might be the decisive evidence in the MH17 case was revealed when Russian Television sent reporters last month to interview the pilot’s family.
See the brief Russian documentary interviewing the pilot’s wife here:


The pilot’s wife says, at 5:42 on the video, “We were not allowed to open” the coffin. Q: “Not allowed by who?” A: “Not allowed by the [Malaysian] government.” The existing four-nation team had required the Malaysian government to sign onto their secret 8 August 2014 agreement, in order for Malaysia to be allowed to join. This agreement says that Ukraine will have a veto-power over any report that the commission produces  — and this veto-power is the reason why the ‘investigation’ continues dragging on. The now-five nation commission can’t yet produce a report that the Ukrainian government will sign onto.
Then, the interviewer in the documentary says that she had taken her camera-crew to the crash site two months after the plane’s downing, and says that they saw there, still in the field of grass, the pilot’s chair. This video at 6:21 shows it — its bare frame, because the padding had blown off. Here is the pilot’s chair:

Those 30 mm round holes through it are bullet holes; they’re definitely not shrapnel holes, which are larger and very irregular (not at all round). Furthermore, the bullet-holes through the side-panel of the chair’s backrest are fairly head-on instead of at any steep angle; and, so, might have been from stray bullets among the gunner’s fusillade into the left cockpit-side that was focused around the pilot’s belly-area . This chair backrest is thus yet further evidence suggesting that the pilot’s corpse had bullets, or bullet-residues, in it.
For more background on the pilot’s corpse’s evidentiary importance to solving this crucial mass-murder case, see this.  For my reconstruction of the evidence, and of where it points to regarding guilt and motive, see this .
RUSSIA’S GAME ON THIS:
On July 29th, Russia vetoed at the United Nations an attempt by the U.S. and its allies to transfer the MH17 investigation to a rigged UN commission that would be set up in order to enable the guilt for the cover-up to be transferred away from Netherlands, Belgium, Australia, and Ukraine, the four nations that set up the existing official corrupt ‘investigation,’ whose ‘findings,’ at this late stage, would be believed only by outright suckers in the West — and that number of people might not be enough now to protect the actual guilty parties in the case. Russia wants the guilty parties to bear the blame not merely for the mass-murder itself, but for the subsequent and ongoing cover-ups. If the official ‘investigation’ finds Russia and/or the people of Donbass to have perpetrated it, then Russia will presumably make public, evidence, which it has thus far withheld just in case America and its allies turn out to be that brazen. So, Russia might even be eager for that to happen. The official ‘investigation’ has already announced that its conclusions will be made public in October. Until then, the commission is doing everything they can to forestall, if not prevent, a scandal-squared, from resulting. (For example: if anything, Richard Nixon’s Watergate cover-up doomed him even more than the Watergate-crime itself did.)
Here are some of the typical ways the Western press have reported on Russia’s veto:
“Russia threatens UN veto on Julie Bishop’s MH17 tribunal ”
“Why Russia Vetoed the MH17 Tribunal ”
“Alternative solution needed for investigating loss of MH17: Russia’s Security Council veto means other means may be used to find those responsible ”
For some unexplained (though accepted-without-question by the Western press) reason, the Western powers aren’t satisfied for the official ‘investigating’ commission (though itself entirely Western until the recent addition of Malaysia to the commission)  to be blamed for producing the official ‘findings.’ Western leaders had wanted the UN to be blamed instead. Russia voted no on the Western proposal (which was fronted by Malaysia, on behalf of the West); China abstained  (perhaps in the hope that the West won’t go after them, too).
The result is heightened fear within the official ‘investigating’ commission. On 3 August 2015, Russian Television headlined “Dutch Safety Board asks for RT’s assistance in MH17 probe after documentary,” and reported that:

The Dutch agency heading the international probe into Malaysia Airlines MH17 crash in eastern Ukraine has contacted RT over the footage used in our recent documentary on the tragedy. RT’s documentary discovered fragments of the plane still in Donetsk.
The RT Documentary film, titled “MH17: A year without truth,” showed fragments of the crashed Boeing and pieces of luggage still scattered in the area at the time of filming. The RTD crew collected the parts of the plane’s exterior they spotted, bringing them to the administration of the nearby town of Petropavlovsk.
“With great interest we watched your documentary, ‘MH17: A year without truth,’” Dutch Safety Board spokesperson Sara Vernooij wrote to RT. “In this film, RT shows parts of the cockpit roof which were found near Petropavlivka. We would like to gather those pieces and bring them over to the Netherlands so the Dutch Safety Board can use them for the investigation and the reconstruction.”

OUT OF MIND » TRUTH IN CONSPIRACY THEORIES? » MISSING & CRASHED PLANES » The MH17 Pilot’s Corpse: More on the Cover-Up Even His Family Was Blocked from It. Here’s Why.