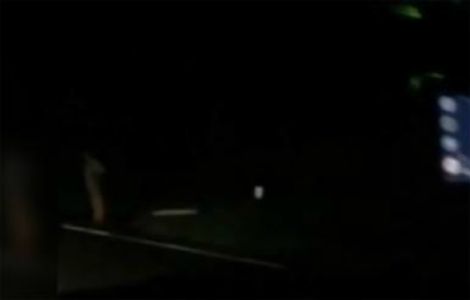 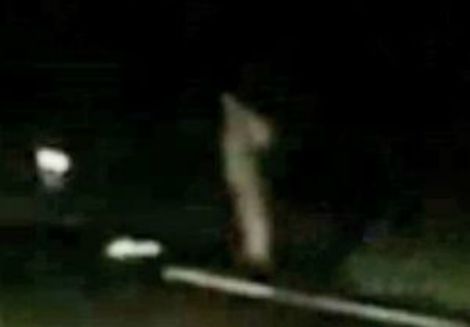 Not much scares me more than the thought of driving on a dark highway and suddenly seeing an unexpected being or anomaly either in the roadway or on the side. That may be the case for two gentlemen in Northumberland, UK. Though...I have some qualms with this video. There seems to be an anticipation of 'something' ahead by the photographer's movements. As well, the object in question could easily be an effigy of a ghost. The full-bodied spectre was fairly solid...more so than what I am aware of.

Make your own assessment...


Two friends are convinced a 'phantom hitchhiker’ lurking late at night on a narrow country lane was the ghost of a dead RAF pilot.

Rob Davies and Chris Felton spotted the ghostly figure of a man trying to wave them down on the side of a road near Belsay in Northumberland left the Gateshead radio presenters in for a sleepless night.

The pair claim the man was dressed in RAF gear as he emerged late at night - and they have since discovered that he was stood close to where an air force jet crashed during the Second World War.

Rob, from Whickham, and Chris, from Birtley, had been out recording a piece on the anniversary of the medieval Battle of Otterburn between the Scottish and English and were heading home along the A696 just after 11.30pm on Wednesday when they spotted the unusual figure.

Rob, 27, told the Chronicle: "We saw a man standing at the side of the road. We both actually jumped at first because we didn’t see him until very late.

"He was dressed in a beige colour from head to toe.

"He was sticking his arm out for a lift, but we could not stop in time due to being at 60mph."

Rob claims the man's eyes did not reflect the car's lights and added: "Chris, who was driving, decided to turn around for him but we both agreed that he looked a bit odd.

"We were two miles north of the nearest village and there was nothing for miles.

Chronicle LiveSee Gateshead driver's spooky video which captured soldier's 'ghost' on A696 near BelsayGhost: Is this mysterious figure an RAF pilot?
"We said we would pick him up if he was real and just make sure he was dropped at the nearest village, and joked he might be a phantom hitchhiker.

"I started filming on my iPhone as it seemed a bit odd.

"We couldn't remember how far back he was, but we saw him again and slowed.

"He was dressed in what I can only describe as RAF gear and was holding something under his arm, which looked like a helmet or some kind of bag.

"We had to turn again so we could pick him up."

However, when they did so, the ghostly figure had vanished.

"It was only seconds and no other car had been past, but when we turned around he was gone," said Rob.

"We continued driving and there was nobody walking on either side of the road.

"We cannot explain it - the only explanation is that he walked off into the darkness.

"There was another car behind us but he did not stop either.

"We can only assume this driver would have seen him also as his clothes caught the light of the headlights.

"It would be interesting if they, or any other motorists on that road, have seen him.

"We are 100% certain that nobody stopped or we would have seen them pulling over."

Rob has since found out about the crash near where the man was standing, which happened during a training exercise in 1943.

He said: "When we got home, I Googled all of the fatal accidents that has happened on that piece of road - and there are lots, but when I Googled RAF incidents, I found a search result that linked a crash from 1943, and it even lists serial numbers of the plane involved.

"The crash happened in a field at Middleton Farm, which is the fields behind where he was." - Phantom hitchhiker could be ghost of RAF pilot killed in crash, say terrified drivers