OUT OF MIND » CHANGING ENVIRONMENT & NATURE » ATMOSPHERIC CHANGES » A world on fire! Record heatwaves continue to be registered around the globe

A world on fire! Record heatwaves continue to be registered around the globe

A world on fire! Record heatwaves continue to be registered around the globe Tue Aug 11, 2015 9:03 am

A world on fire! Record heatwaves continue to be registered around the globe 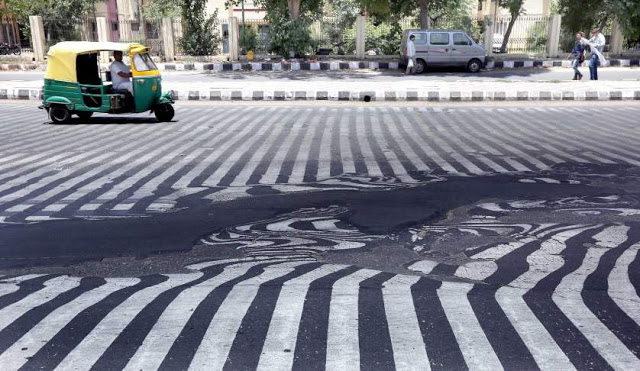 Roads melt in India as a heatwave in June caused nearly 3,000 deaths
Austria
According to earlier reports, the month of July has also been the hottest in Austria in the 248 years since temperatures have been recorded, the Central Institute for Meteorology and Geodynamics (ZAMG) said.
Two heavy heat waves that took maximum temperatures up to 38 degrees Celsius are largely responsible, according to ZAMG climatologist Robert Klonner, who said the temperatures across the country were three degrees hotter than the long-term average for the month.
Klonner said in some parts of the country it was not only the hottest July on record, but the hottest month ever recorded.
The number of hours of sunshine for the month was also a significant 20 percent higher than the long-term average across the country, while 20 percent less rain than average was recorded.
Slovakia
Paramedics went out on a call to rescue people in Slovakia collapsing from heat 729 times total between Monday morning and Friday evening, confirmed Jozef Minar of the Slovak Emergency Medical Service Operational Center on Saturday.
Statistics were ratcheted up significantly by Friday, when paramedics had to treat 110 heat-induced collapses.
Heat warnings in Slovakia are still in place, as peak temperatures ranged between 35-37 degrees Celsius.
According to the Slovak Hydrometeorological Office, temperature peaks are forecast to reach up to 38 degrees Celsius at some locations on Sunday and Monday.
Germany
The heat is set to last well into next week as slow moving storms to the north-west of the British Isles and high pressure over eastern Europe combine to create the sweltering conditions.
Temperatures in Berlin, Germany soared to 35C yesterday, while forecasters at AccuWeather have predicted that today will be the city's hottest day of the week with possible highs of 38C, close to the highest temperature ever recorded in Berlin of 38.1C in 1959.
Egypt
At least 21 people have died and 66 others suffered exhaustion in Egypt due to a severe heat wave that is sweeping across the Arab country.
Fifteen people have died in the capital Cairo, four in Matrouh city and two in the Upper Egyptian city of Qena, the Ministry of Health said in a statement yesterday.
The temperature reached 39 degrees celsius in Cairo and 45 degrees celsius in the Upper Egypt governorates on Saturday, according to the Egyptian Meteorological Authority (EMA).
The people have been advised to keep away from the direct sunlight.
The heat wave is expected to continue until August 25.
Poland
Warsaw set a new all-time August high temperature record on Saturday when the temperature peaked at 36.6 C (97.9 F)
The previous record was 36.4 C (97.5 F) from August 1994, according to AccuWeather Meteorologist Tyler Roys.
Following six straight days of temperatures 32 C (90 F) or higher, the heat will back off slightly on Monday with a high of 30.6 C (87 F).
Temperatures soar again on Tuesday as another streak of 32 C (90 F) or greater high temperatures begins.
This stretch of heat is expected to continue into next week
US
Dangerous heat will continue from portions of northern Kansas and Missouri southward to the Gulf Coast where widespread heat indices will be over 100F.
Locations through the Lower Mississippi Valley could see heat indices as high as 110F to 115F.
Spain
Recent heat has left its mark in Malaga Province by leading to an almost complete lack of air conditioning units and electric fans.
All but the largest shops are reported to have run out of stock, due to the record-breaking temperatures registered in the area over recent weeks and also to a lack of prevision on the part of suppliers, who have been caught out by increased demand following a number of quiet years in the sector.
One Costa del Sol supplier reported having sent out about 1,600 air conditioning units in July and said that establishments are waiting for deliveries to replenish supplies as desperate consumers hunt high and low for something to relieve the heat.

OUT OF MIND » CHANGING ENVIRONMENT & NATURE » ATMOSPHERIC CHANGES » A world on fire! Record heatwaves continue to be registered around the globe