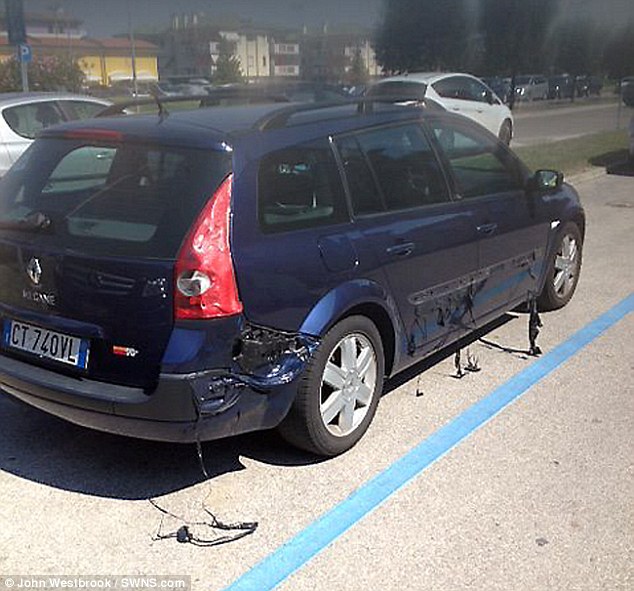 A car in Italy melts in the afternoon sun....
A summer like never before, another weather extreme to go along with all the other weather extremes.......
The first half of 2015 was the hottest on record.
June 2015 was warmest June on record for the globe.
Global land areas and oceans each recorded record warm for June.
July will be confirmed by NOAA as the hottest July ever recorded on land and oceans and August doesn't look like it will cool down any time soon!
This summer has been the hottest ever since records began.....
Thousands of people have died in India, Pakistan, Asia, Europe and the US with old people being mostly affected.
Billions of fish and marine life have died along with millions of cattle, agriculture has failed and record droughts are being recorded world wide, it is a terrifying glimpse into an apocalyptic future as each month will become more extreme.
Cars melting and bursting into flames from record heat, car steering wheels melting, roads melting road cones melting, sheep's wool burning on their backs, record wildfires are just a glimpse of things to come, the toothpaste is out of the tube and cannot be put back...
Volcano activity is at an unprecedented level, major earthquakes have risen 450% since 1900.

'Elswere the world is a mess': UN official admits there is 'no chance to support' many of the refugees affected by war as the global number hits a record 59.5 MILLION
Greece and Italy are unable to cope with swarms of immigrants and Calais in France is brought to it's knees as migrants battle with police to escape to Britain.

ISIS are beheading Christians as the Muslim Caliphate raises it's demonic head, to quote Jesus.. '
For then there will be great distress, unequalled from the beginning of the world until now—and never to be equalled again.
We are here!