OUT OF MIND » CHANGING ENVIRONMENT & NATURE » EARTH CHANGES » It's one of the world's most dangerous volcanoes: Ecuador's colossus Cotopaxi volcano declared a state of emergency!

It's one of the world's most dangerous volcanoes: Ecuador's colossus Cotopaxi volcano declared a state of emergency! Mon Aug 17, 2015 10:33 am 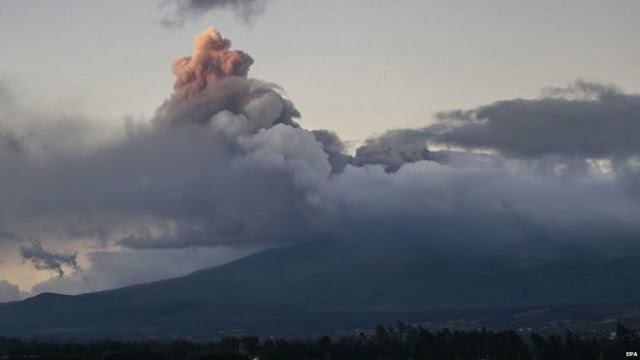 Ecuador President Rafael Correa has declared a state of emergency over increasing activity at the Cotopaxi volcano near the capital, Quito.
The declaration gives authorities more flexibility in using government funds to address the situation. Officials evacuated several hundred people from nearby villages after the volcano began to erupt on Friday.
Cotopaxi is among the world's most dangerous volcanoes and is prone to fast-moving rock and mud flows. Why have I made that decision?
To secure resources... to address a potential emergency and mobilize the necessary resources," Correa said in his weekly address.
Several villages in Ecuador were evacuated, as the volcano rumbled to life, angrily spewing ash into the sky and threatening nearby residents with potential volcanic landslides.
Officials said the evacuations were ordered as a precautionary measure, as Cotopaxi became increasingly active, but that no landslides had yet been recorded.
Several towns and river settlements in Cotopaxi province, some 45 kilometers (28 miles) south of the capital Quito, were cleared, said Pablo Morillo, head of the Secretariat for Risk Management. Authorities maintained a yellow alert in the region, a mid-range warning, and said it would remain as long as Cotopaxi continued to stir.
"We will maintain the same alert, but since there are still no lahar flows, the evacuation order is still only preventive," Morillo told AFP.
The volcano, which towers to 5,897 meters high, is considered to be one of the most threatening in the region -- both because of its size and because it is so close to well-populated towns.
Cotopaxi registered several eruptions yesterday, following decades of inactivity, spewing ash columns as high as 8km into the sky.
The volcano spewed a current of hot glass and rock -- called pyroclastic flow -- which authorities warned could trigger avalanches or landslides of volcanic debris, also known as lahars.
"Due to the pyroclastic flows that can generate lahars, preventative evacuations (are ordered) on the southern part" of the volcano, the Risk Management office said on Twitter.
The Geophysical Institute also cautioned residents:
"At present there have been no lahars, but they could occur."
Officials did not specify how many people could be affected by the evacuation order, though residents could be seen piling out of towns today, wrapped in blankets and sitting on the side of the road.
Quito Mayor Mauricio Rodas said one million surgical masks would be distributed across the city of 2.3m people, to prevent inhalation of falling dust.
Some residents could be seen wearing masks yesterday as they fled villages, with a large, angry cloud of gray dust and ash forming over Cotopaxi.
The Environment Ministry has declared the volcano off limits to tourists, and 15 climbers who were preparing to scale the mountain were sent home Friday.
Cotopaxi is one of eight active volcanoes in Ecuador, a country that is part of the so-called Pacific Ring of Fire that makes it prone to seismic and volcanic events.
Its snow covered tip has been described as "majestic" and is a popular climbing destination among hikers.
There are several other inactive volcanoes in the country, which is in the northern Andean volcanic belt.

OUT OF MIND » CHANGING ENVIRONMENT & NATURE » EARTH CHANGES » It's one of the world's most dangerous volcanoes: Ecuador's colossus Cotopaxi volcano declared a state of emergency!