Donald Trump Has A Trump Card

Deez Nuts is running for president

You know the biggest names in the 2016 presidential campaign - Jeb Bush, Hillary Clinton, and lately, Donald Trump. But it turns out the field of declared candidates is far larger than the 21 Democrats and Republicans whose candidacies get regular coverage in the media.
An independent named Deez Nuts, for example, filed a statement of candidacy with the Federal Election Commission Sunday. He joined more than 500 other people who have done the same.
The latest entry to the race is Steven Wayne Covington, who filed his statement of candidacy Monday, the 512th person to do so.

Race to 2016: campaigns are heating up

There is a wide list of party affiliations given in the various forms. There are 80 people who say they are part of the Democratic Party, 127 declared Republicans, 135 independents and 12 libertarians. Fifteen people give no party affiliation (including Covington, the latest entrant). Other party affiliations people have written in include the "Ace Party," the "Jewish/Christian National" party, and "HEL" (it is unclear what that stands for).
The 512 declared candidates include a nod more famous political figures: "Sara H. Paylin" is registered to run, as is "Brystol S. Palyn."
There is also at least one cat: Isaac Weiss, a 17-year-old high school student from Louisville, filed a statement of candidacy for his friend's cat "Limberbutt McCubbins." McCubbins was the 192nd entrant into the race.
© 2015 CBS Interactive Inc. All Rights Reserved.

Get FREE private and secure Email and Messaging click now!
(Before It's News)
By King of Shambhala (I announce the Apocalypse and Revelation as a Buddhist reluctantly delving into the Christian Apocalypse as a Messenger of it.)

Heidi Klum sends a Satanical message saying Trump has denied her being a ’10′, so she’s a ’9.99′ instead. That’s a Satanical number, the Number of the Antichrist (i.e. the Antichrist is SATAN-IN-PERSON) aka the Mark of the Beast. It’s an occult signal because 999 is 666 upside down. It’s a sign of the Apocalypse and Klum and Trump look like they’re the prophecied Two Witnesses of the Bible..
If you want to be saved you have to spread this message worldwide and fast and not wait a second. That’s what the Bible says.
Several cover this like CNN or this one here: 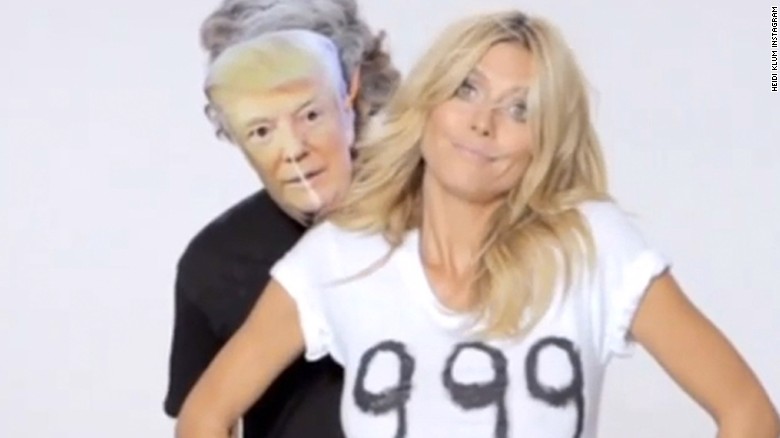 A day after Donald Trump declared that Heidi Klum is no longer a “10,” the iconic supermodel fired back at the Republican presidential candidate in a video posted on Twitter.
<a href="http://ox-d.beforeitsnews.com/w/1.0/rc?cs=5125e7a33c8bf&cb=INSERT_RANDOM_NUMBER_HERE" ><img src="http://ox-d.beforeitsnews.com/w/1.0/ai?auid=326914&cs=5125e7a33c8bf&cb=INSERT_RANDOM_NUMBER_HERE" border="0" alt=""></a>
In the 12-second video, Klum is at a photo shoot, wearing a white tee with the number 10 on it, when a man wearing a Donald Trump mask sneaks up behind her and snatches the number 10 tag off her shirt, revealing a “9.99.”

Klum mockingly gasps in the video, tweeting “#TrumpHasSpoken #sadly #9.99 #NoLongerA10 #IHadAGoodRun #donaldtrump #HeidiTrumpsTrump #BeautyIsInTheEyeOfTheBeheld.”
Trump mentioned Klum in an interview with the New York Times, in which he was asked about his comments on women.
“I find women to be amazing,” Trump said but then admitting that he sometimes goes a “little bit far.” Nevertheless, he added, “Heidi Klum. Sadly, she’s no longer a 10.”
——————
As part of revealing the APOCALYPSE NOW Trump’s rise and Joe Arpaio’s insistance on the birth certificate are vital elements of revealing the Antichrist Obama.
IMPORTANT NEWS: Comments disabled because people reveal my private info. That’s a crime seeing Judge Tafoya ruled on it in Colorado in 2013: it is forbidden to reveal your opponent’s private information on Internet (Delgaudio VS SPLC).  Geeper, Gus Fang, “The Clucker”, caoneil76 are the anonymous aliases at BeforeItsNews who made me close the comments because they were guilty of committing Internet crimes in the comments.
http://beforeitsnews.com
It is embarrassing to live in this country. I totally get why the rest of the world hates us.