Yesterday at 3:27 pm by PurpleSkyz

Yesterday at 3:25 pm by PurpleSkyz

» What are these bright objects in the sky

» Dr Karen Lebacqz, Ph.D. On The Belmont Report – A Code Of BioMedical Ethics, Morals And Guidelines For The Protection Of Humans, Who Are Subjects Of BioMedical Research

» Judge Offering Reduced Sentences for Criminals Who Get COVID Jab

» CDC Admits: Vaccines are failing, the vaxxed can be super-spreaders

» Oh Oh Censorship Isn't Working!!! Some are WAKING UP!!!

» Mysterious orbs and ray of light in the sky over Zhengzhou, China

» Galileo Project Will Search for ‘Evidence of Extraterrestrial Technological Artifacts’

This UFO was caught not by watching the sky, but by leaving the camera and letting it record. This is smart, because a lot of UFOs can hear your thoughts from a distance and thus, the UFO will automatically cloak itself. Have you ever looked at a UFO cloud and then instantly it starts to disappear before your eyes? Thats it. Its a auto cloaking system that works really well, but not well enough. Because no one was watching, this UFO thought it was safe to shoot past. Nice catch.
Scott C. Waring
www.ufosightingsdaily.com
Eyewitness states:
UFO suddenly appears before my camera here confirmed that it is no coincidence other sightings I've seen, so I left with my camera and without investing much time managed to film the UFO, which seems to me also that you can try a Dimensional Portal.

This UFO report has a green glowing craft caught during sunset. I often say this, but I need to say it again, UFOs are most often seen during sunset. This green craft is very beautiful. Its not a disk, but a shape like no other. After she took the first photo, the craft hid in the shadows of the trees, but lucky for us, she caught it. Its very geometrical in shape and is tilted to one side. Check out the closeups I made below.
Scott C. Waring
www.ufosightingsdaily.com

Eyewitness states:
I was out fishing in the Yellowstone River one evening when the pictures were taken.It was around 7:30 or 8:00 p.m. and I took a few of the sun behind the clouds but something kept grabbing my attention about that particular area.I kept feeling like I needed to take more pictures towards that direction. I noticed the object in one picture moving towards the cloud, and when looking at the picture before, I noticed it in the trees across the river from me. It has a strange green glow. I can't say what it was but I definitely believe that it's possibly a u.f.o. and I wanted experts to have a look.

A bright meteor was seen from Puerto Rico on the night of August 20, according to Sociedad de Astronomía del Caribe (SAC).

But it was not only the meteor, also a UFO can be seen moving through the sky alongside the meteor and it appears that the UFO has intervened before the meteor would hit Puerto Rico. 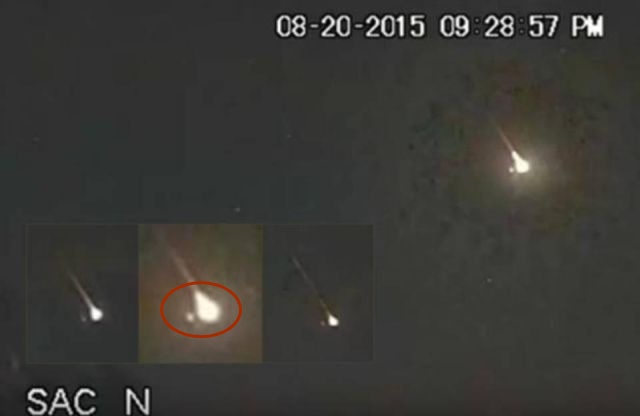 The largest astronomy organization on the Caribbean Island says the meteor was seen at about 9:30 p.m. local time. "We got reports from the north and west side of the Island, but it is possible the meteor was also seen from other areas of Puerto Rico, SAC said.

Although there was a recent meteor shower (the Perseids) it seems this meteor was not related to the shower and was a sporadic meteor instead.

SAC explained this type of meteor is usually associated with small space rocks which generally disintegrate on Earth's atmosphere. Only a few have enough size or mass so that parts of it can survive the atmospheric friction, and reach the surface.

Now, there are rumors that an asteroid will impact Earth, sometime between Sept. 15 and 28, 2015. On one of those dates, as rumors go, a meteor or asteroid will hit near Puerto Rico and destroy much of the Atlantic and Gulf coasts of the United States and Mexico, as well as Central and South America.

Due the on-going rumors NASA has been forced to issue a statement publicly.

According to NASA: "There is no scientific basis - not one shred of evidence - that an asteroid or any other celestial object will impact Earth on those dates," said Paul Chodas, manager of NASA's Near-Earth Object office at the Jet Propulsion Laboratory in Pasadena, California.

"If there were any object large enough to do that type of destruction in September, we would have seen something of it by now," he stated.

NASA continues: In fact, NASA's Near-Earth Object Observations Program says there have been no asteroids or comets observed that would impact Earth anytime in the foreseeable future. All known Potentially Hazardous Asteroids have less than a 0.01% chance of impacting Earth in the next 100 years.

OK, NASA has found and is tracking about 95 percent of the largest objects flying near Earth, those that are .62 miles (1 km) or larger in diameter. But what about the other 5%, like the asteroid that exploded over Russia and even surprised NASA.

Even surveys of near-Earth objects of 100 meters or less are not even one percent complete, planetary scientist Paul Abell, at NASA’s Johnson Space Center said to Forbes.

So, how can NASA be so sure that there is No asteroid or meteor threatening Earth?

Just yesterday, August 22, 2015, NASA's All-Sky cameras captured huge Meteor/Fireballs burning up in the atmosphere. The network reported 22 fireballs just in one day which are not related to the Perseid meteor shower.

Suppose something is really about to happen, the UFO pilots are going to protect us against the asteroid/meteor threat like they did with the ‘sporadic fireball’ above Puerto Rico, yesterday or we have to believe NASA’s statement?

22 sporadic fireballs in one day and NASA does not know where they came from. Are they the harbinger for something bigger?

Personally, I would not rely on NASA’s statements, even Charles Bolden, the chief of the Nasa, has warned that the US space agency's best advice on how to handle a large asteroid heading towards Earth is "pray".