CERN Plans Held up by UFOs and Electron Clouds

BTW, the UFOs are “unidentified falling objects”. We reported on that awhile ago. I trust these scientists know what they’re doing, but still question the weird dance routines deep within the bowels of the facility.
Thanks for sharing, J.  ~ BP 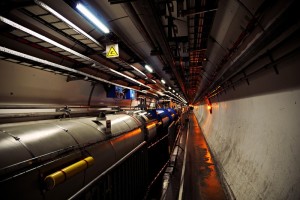 High-energy LHC plans held up by UFOs and electron clouds

August 19, 2015
Kicking the world’s largest machine into overdrive is turning out to be harder than expected. Researchers at the Large Hadron Collider at CERN, near Geneva in Switzerland, say that plans to run their physics experiments at higher energies are likely to be delayed until next year.
The LHC was rebooted in April, after a two-year shutdown to upgrade the machine. In the second run, it should be able to gather physics data at energies of 13 teraelectronvolts, the highest-energy collisions of particle beams ever. But researchers in charge of getting it up and running again, who this week presented the first report on the LHC’s performance at a conference in Ljubljana, Slovenia, have revealed that things haven’t quite gone as planned.
“The process is slightly slower than we would have hoped,” says Paul Collier, the LHC’s head of beams. Clouds of electrons created by ionised gas in the beam chamber and microscopic dust particles – playfully known as unidentified falling objects, or UFOs – are interrupting the beams and making it harder to get the LHC running consistently.
These effects were present in the LHC’s previous run, but the higher energies, plus efforts to produce more frequent collisions by bunching particles in the beam closer together, make them a larger problem than before.
Collier says the team had anticipated such potential issues, but they have taken some time to deal with. He compares it to driving a car at high speed: although you might be fine at 50 kilometres per hour, things start rattling when you reach 150 kph. “Everything is much closer to the limits of what the equipment can do, so the machine is less forgiving,” he says.

It’s not the first problem this year: a short circuit in March delayed the reboot. The team is only a few weeks behind schedule in preparing beams for the LHC’s various experiments. But because the quality of the beam gets better and more stable the longer it runs, there won’t be time this year to reach peak physics. “Each stage is vastly superior to everything that happens before it, so it’s only towards the end of this process that you’re really mass-producing data,” says Collier.
The researchers now expect to only reach 3 inverse femtobarns (3 fb-1) – the esoteric measurement of beam quality – this year, down from a planned 10. To put this in context, the long-sought Higgs boson was discovered after the LHC reached 12 fb-1.
But they are still on target to reach 30 fb-1 next year, once they understand how to handle their souped-up collider. “We’re learning an awful lot that will help us run the machine even better,” says Collier. “I have good hopes for 2016.”
Source