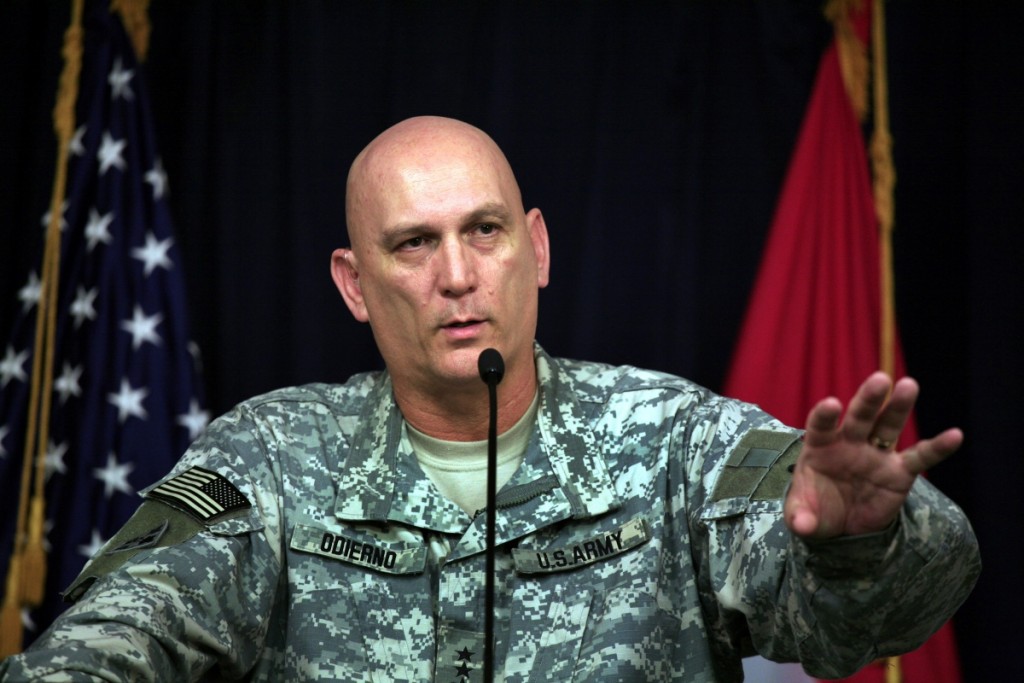 By Claire Bernish
Proving yet again the ubiquitous ties between government and private interests, four-star General Ray Odierno — who retired as the U.S. Army’s Chief of Staff on August 14 — made a rather abrupt leap in career choice to senior adviser for JPMorgan Chase less than a week later.
Not that the commander of the 4th Infantry Division — whose notorious reputation during the Iraq “War” included a [url=https://books.google.com/books?id=JuWlzq_2IVwC&pg=PT382&lpg=PT382&dq=Obeed+Radad&source=bl&ots=lXY5LlSvHB&sig=Qp0h5lPsn8B91wQAHaeAUfErZTo&hl=en&sa=X&ved=0CDkQ6AEwBWoVChMInNTXpq-4xwIVxWw-Ch3vigx_#v=onepage&q=Obeed radad&f=false]penchant for[/url] indiscriminate, mass detention and extrajudicial killings of civilians — was otherwise considering humanitarian work when the megabank advising position happened to open up. It would seem the new role is perfect for Odierno, as he will be advising CEO Jamie Dimon, the Board of Directors, and the Operating Committee with “international planning and country risk analysis, technology, operations, and the rapidly evolving issues of physical and cyber security,” according to a company statement.
JPMorgan’s statement mentions the ex-general’s role with “physical security” in his upcoming duties, but even a cursory glance at the practices by those under his command in Iraq makes those goals seem, well, questionable.
A military intelligence specialist at the time, Sgt. Kayla Williams, said they passed by Odierno’s 4th Infantry Division, whose soldiers appeared “mean and ugly. They stood on top of their trucks, their weapons pointed directly at civilians . . . What could these locals possibly have done? Why was this intimidation necessary? No one explained anything, but it looked weird and felt wrong.”
Though troops under Odierno’s command were credited with capturing Saddam Hussein, their philosophy — which can be summarized as “round[ing] up all the military-aged males” because they didn’t know (or bother to find out) “who’s good or bad” — was dubious for transforming erstwhile neutral civilians into willing combatants.
In fact, a member of the psychological operations unit attached to Odierno’s artillery brigade found it necessary to file a formal complaint concerning those troops’ treatment of Iraqi civilians.

After returning from Iraq, Odierno achieved the rank of Chief of Staff in 2011 — while still maintaining his support of the Bush administration’s decision to invade the country in the first place. According to The Intercept, he explained earlier this year that Saddam “was moving toward terrorism and I believe that if he continued to have problems, we don’t know what he would have done in terms of being part of the problem with terrorism.”
Though Odierno’s abrupt transplant from top military commander to high-powered, international banking adviser might have you shaking your head, such a convenient arrangement is far from atypical. As reported in the Boston Globe in 2010, 80% of generals with at least three stars found placement as executives or consultants in the private sector — largely within the defense industry — nearly immediately upon retirement.
“Ray has dedicated his life to serving our country, rising to the top of the Army with proven leadership that delivers results,” stated Dimon in the announcement of Odierno’s new position. “His experience, vision and impressive track record of success when confronting overwhelming challenges will provide significant value to our leadership team, the firm and our clients across a wide range of issues.”
Success, it would seem, is in the eye of the beholder.
Claire Bernish writes for theAntiMedia.org. [url=http://ucy.tv/Default.aspx?PID=124&T=Anti-Media Radio" target="_blank]Anti-Media Radio[/url] airs weeknights at 11pm Eastern/8pm Pacific. If you spot a typo, email edits@theantimedia.org.
Claire Bernish joined Anti-Media as an independent journalist in May of 2015. Her topics of interest include social justice, police brutality, exposing the truth behind propaganda, and general government accountability. Born in North Carolina, she now lives in Ohio. Learn more about Bernish here!


Thanks to VK for the forward and: http://www.activistpost.com

» Benjamin Fulford 10-24-16… “Mass arrests and extrajudicial killings going on as part of cabal takedown”
» "IF ALL GOES AS PLANNED THE GENERAL PUBLIC SHOULD EXCHANGE WITHIN THE NEXT 24-48 HOURS AND THIS IS TIED DIRECTLY TO IRAQ GOING INTERNATIONAL": John MacHaffie
» My Life, being an adult Star kid PT4 (general ET), PT5 (looping), PT6(2), PT6(2) update
» U.S. Warns Americans From Travelling To Iraq: Obama Annexes Anbar Region In Iraq To Infiltrate Syria.
» COVERUP? 2 Star General & Head Of Space Defense Dead! 11/7/16