OUT OF MIND » PERCEPTUAL AWARENESS » THE SHIFT IN CONSCIOUSNESS » The Gatekeeper

Elva Thompson
Contributor, ZenGardner.com
“HELL IS EMPTY AND ALL THE DEVILS ARE HERE.”
–William Shakespeare

“The sorcerers of ancient Mexico were quite ill at ease with the idea of when [the predator] made its appearance on Earth. They reasoned that man must have been a complete being at one point, with stupendous insights, feats of awareness that are mythological legends nowadays. And then, everything seems to disappear, and we have now a sedated man. What I’m saying is that what we have against us is not a simple predator. It is very smart, and organized. It follows a methodical system to render us useless. Man, the magical being that he is destined to be, is no longer magical. He’s an average piece of meat. There are no more dreams for man but the dreams of an animal who is being raised to become a piece of meat: trite, conventional, imbecilic.
In order to keep us obedient and meek and weak, the predators engaged themselves in a stupendous manoeuvre stupendous, of course, from the point of view of a fighting strategist. A horrendous manoeuvre from the point of view of those who suffer it. They gave us their mind! Do you hear me? The predators give us their mind, which becomes our mind. The predators’ mind is baroque, contradictory, morose, filled with the fear of being discovered any minute now.
Think for a moment, and tell me how you would explain the contradictions between the intelligence of man the engineer and the stupidity of his systems of beliefs, or the stupidity of his contradictory behaviour. Sorcerers believe that the predators have given us our systems of belief, our ideas of good and evil, our social mores. They are the ones who set up our hopes and expectations and dreams of success or failure. They have given us covetousness, greed, and cowardice. It is the predators who make us complacent, routinary, and egomaniacal.”
Carlos Castaneda.

The predator and the politics of deception
All my life I have strived for animal rights, and have faced many challenges, triumphs and defeats, but now, when I look back at the success and failures, a different perspective of reality emerges.
I remember how relieved I 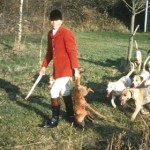 was when hunting with dogs was abolished in the UK. However, it didn’t take me long to realise that the legislation had no teeth… and was never intended to.
The orcs in their uniform of bloody death still carry on killing innocent creatures with the blessing of their satanic masters, the paedophile elite. They still carry on breaking the law, trespassing on private property; ripping up any unfortunate creature who happens to cross their path, and put motorists at risk when their dogs riot upon a busy road. And the guardians of the status quo… the corrupt police look the other way. But seasoned animal rights activists know the masonic score, and how the predator wriggles and squirms through sooty wormholes of corruption to seek its will against the peoples.
The falsity of change
Many of us still believe that direct action and confrontation with the status quo, can facilitate change for the betterment of all. But nothing has changed since time began. Humanity is still selfish, brutal and unthinking, and nothing will change in this abyss of opposites, for our reality is a construct governed by the parasitical ego mind. We can point to this or that success but taking the world as a whole, it has never been so satanic, polluted and debased.
The self-serving ego of polarity
There is a lot of variation in the matrix game, and the animal rights movement is a good example of all ‘progressive’ movements, colour revolutions and ‘fighting’ for whatever.
Animal rights has many shirt-tail relatives: the egoistic and charismatic leader that divides rather than unites, the self seeking martyr complex; the self righteous indignation of the cat and dog brigade who tell us they love animals, but think nothing of consuming a dead lamb, or a crated veal calf that has never seen the light of day. These fractals are an anchor weight for any spiritual movement and often destroy from within. They are ego driven,  mindless bags of squirming appetites, the Impostor Consciousness of the parasitical predator: my meat, my dick, my pint and my “intellectual” barrack room opinion.
The parasite called I

Humanity’s problem is the gatekeeper, the parasitical, spiritual hit-man of our species. The watcher at the threshold of our immortality. The fearful ego I that keeps us locked into the abyss, and the game of “us and them”. The watcher is the servant of the enemy of life, and the third dimension is its playground. The glare of the serpent’s eye is hypnotic, and it can and does engage our minds, and lives its life of self gratification through our awareness and emotions… until we die. It is the chattering voice of distraction, the guard at the gate that leads to the All, the reptilian implant that has usurped our divinity. Only the foolish think the Law of Duality: The Law of Polarity can change. There can be no utopia in duality, in the world of the predator there is only I, me and mine.
Human beings are all action and reaction[duality] and the way the game is rigged, we pile up energetic debt that draws us back life after life into the brutal game of the abyss. The pendulum swings back and forth, age after age, and man the farm animal comes out of the caves and goes back in…ad infinitum and ad nauseum.
We don’t realise we have a mind parasite, and the cause of the problems in the world are energetic. The  conflict is spiritual, and the manifested world is a reflection of ourselves; our impostor consciousness of hereditary entitlement to scar and rape the living world.
Consciousness of the third kind.

‘The world will not evolve past its current state of crisis by using the same thinking that created the situation.’ Einstein.

There are some of us who have an innate love for the planet. Our hearts break as the butterfly nations disappear, their remaining habitat destroyed for a god-damn road or a piece of worthless furniture;  and when the last white rhino on the planet has to be guarded from the predations of the unkindest beast that ever walked this earth…extinction is looming on our horizon.
But so few of us seem to have this understanding…this planetary connection. Perhaps there is an inner knowing, an awareness on a deeper level that ‘That Art Thou.’ [see my article Satanic Reality] Or maybe we have already on a conscious level re-connected with the All.
The solution
Once we leave the energy of the “game of us and them” and take our power back, with vigilance and introspection, we can overcome the parasitical dictates of the reptile mind. We can shut out the whispering urging voice of sin, and view the events unfolding on this planet and in our own lives with non dual contemplation.
More Here>>
+++
ZenGardner.com

OUT OF MIND » PERCEPTUAL AWARENESS » THE SHIFT IN CONSCIOUSNESS » The Gatekeeper