This Powerful Ancient Herb is Proven to Open Your Third Eye

by Makia Freeman,
In a world filled with paperwork, documents, school tests, legalese and more, the demand for us to be mentally sharp is higher than ever. Luckily we can turn to some herbs from the ancient world to help us in this area. Bacopa is an age-old revered herb in the Indian Ayurvedic tradition, where it is also called Brahmi (which literally means “expansion of consciousness”).
It has been safely used for thousands of years. Bacopa enhances clear thinking, focus, memory and cognitive function in general, and people are starting to realize it (I see many natural health products around now including bacopa in their formula). Seems like the bacopa brain is catching on … 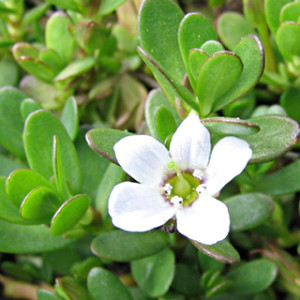 The bacopa brain phenomenon is not just something found in Ayurveda or anecdotally; it’s also being proved by many scientific studies which are being conducted now. In various human studies, bacopa intake has been associated with faster information processing, increased learning rates improved memory retention and reduced testing anxiety in as little as 12 weeks.
In one recent scientific study, researcher Brian Kairalla of the Philadelphia College of Osteopathic Medicine found that elderly volunteers who consumed 300 milligrams of bacopa per day showed significant improvements in verbal information processing compared to the placebo control group. He found this impressive enough to go on to suggest that bacopa could help prevent Alzheimer’s! Kairalla said that “long term studies [into bacopa] might be explored for its potential to play a role in protecting or delaying age related memory decline or delay Alzheimer’s disease onset and/or progression.”

Bacopa doesn’t just improve the beta-brainwave aspect of your brain, involved in doing and day-to-day activity. It also improves the alpha-brainwave aspect. Bacopa has a profound calming ability and reduces the effects of stress on the brain. Due to its tension-relieving action, it is used for psychoactive diseases such as epilepsy, insanity and nervous breakdowns. It also helps people maintain a positive mood and life outlook and can used to counter depression.
Bacopa’s most impressive aspect may be its effect on consciousness. There is some evidence to suggest Bacopa may activate the pineal gland, since it is able to reduce the amyloid (insoluble fibrous protein) deposits which tend to accumulate at the pineal gland and impair its functioning. With a cleansed pineal gland, profound meditative states and psychic abilities are much easier to access. Bacopa is thus a natural tool for those seeking higher consciousness.