Alleged Alien Spacecraft shot down in Iran – The kickoff of the September 2015 Events?

Alleged Alien Spacecraft shot down in Iran – The kickoff of the September 2015 Events?

A disturbing new report being circulated in the Kremlin today by the Ministry of Defense (MoD) states that “significant elements” of the newly created Aerospace Defence Forces (VKO) and the 22nd Spetsnaz (Special Forces) Brigade are currently being deployed throughout the Islamic Republic of Iran and are working in conjunction with the Army of the Guardians of the Islamic Revolution (IRGC) to “inspect and identify” items within the massive debris field that resulted from the 31 July shoot down of an alien spacecraft. 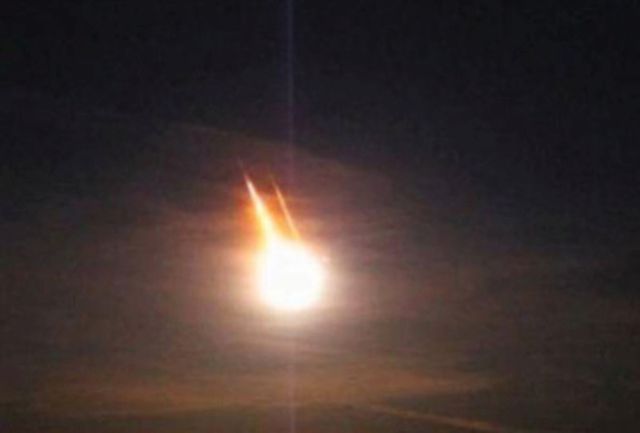 Image of the alleged shoot down of an alien spacecraft in Iran.
According to this report, the near catastrophic meteor impact occurring in Iran on 31 July which set off a 5.2 magnitude trembler was, in fact, a coordinated Federation-Iranian “successful intersection” of an “identified” alien spacecraft whose extraterrestrial entities are known to be working with certain elements of the United States military against both Russia and Israel.

The identification of this alien spacecraft, this report continues, was made by the newly created Aerospace Defence Forces (VKO) on 29 June after it attempted to “attack and destroy” another spacecraft entering the atmosphere of our Earth over the State of Texas.

While maintaining constant surveillance, since 29 June, of this “known to be hostile” spacecraft, VKO experts in this report state, analysts calculating its orbit determined it could be “intersected” in its orbital path by Kosmos 2491 and 2504 on 31 July as it passed over Iran.

Upon the determination that this spacecraft could be “intersected”, this report says, Federation “leadership elements” contacted their Iranian counterparts who then dispatched to Moscow the head of the IRGC, Major General Qassem Suleimani, on 24 July, to coordinate the taking down of this “hostile entity”.

With a coordinated plan in place to take down this spacecraft over Iran, MoD analysts in this report state, Kosmos 2491 and 2504, on 31 July, made a “successful intersection” of it causing it to break into numerous fragments…the majority of which fell into the Iranian regions of Eshtehard, Kerman and Bandar-e Mahshahr.

After a Security Council of Russia meeting, President Putin authorized the removal and transportation back to Federation territory of the debris collected by both Russian and Iranian military and scientific specialists from the alien spacecraft shot down over the Republic of Iran.

Two Caspian Flotilla warships currently docked in the Iranian port of Anzali to pick up the spacecraft debris, this report notes, are the Volgodonsk and Makhachkala, both of which are now operating under the command of the Aerospace Defence Forces (VKO).

MoD report further identified this spacecraft as being a part of the suspected (underwater/underground) alien fleet being monitored by the US military off the coast of Aguadilla Puerto Rico, from the former Strategic Air Command (SAC) Ramey Air Force Base, now known as Rafael Hernández Airport.

In 2013, this report continues, Federation “assets” were able to obtain a Top Secret US Homeland Security video of an alien spacecraft operating over this former Puerto Rico SAC base, which the Federal Security Services (FSB) then forwarded to the Scientific Coalition of Scientists for UFOlogy (SCU) for further examination.

Equally concerning to the MoD, they explain in this report, are the growing observations from “neutral observers” all over the world reporting an increase of alien spacecraft above our Earth’s atmosphere, which even the International Space Station (ISS) video feeds are unable to censor fast enough. 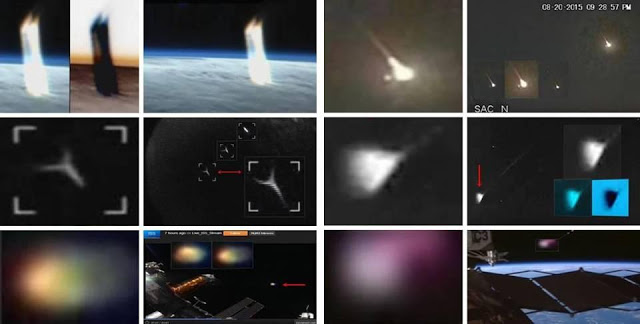 Unidentified Flying Objects above Earth captured during the month August 2015.
And as to how these latest events relating to the shooting down of this alien spacecraft over Iran tie into the Obama regimes September-October “Grand Event” we are still attempting to fully analyze.

However, with the Washington Post’s 14 March 2011 “pre-warning” article exploring the possibility of a massive tsunami striking the American east coast, when coupled by previous warnings of the same catastrophe being caused should the suspected alien base in Puerto Rico be attacked.

Suspected Alien/UFO underwater base in Puerto Rico.
Detailed images and analysis of the base see the links below:
http://jorgemartin-enigmasdelmilenio-english.blogspot.com/2012/08/did-we-discover-large-undersea-alien.html
http://www.marsanomalyresearch.com/evidence-reports/2012/216/uso-base.htm
With the alleged shoot down of the alien spacecraft, resulting in an increase of alien spacecraft above our Earth’s atmosphere, the possibility of an attack on the suspected alien underwater base, which the main stream media will explain as a natural disaster, ad all the other things that we know will happen in September (Read here the complete list of 33 events in September) and without a doubt, we are going to witness a convergence of events during this month that is quite remarkable. By Whatdoesitmeans.

» THIS Was Made By An Alien Spacecraft
» September 2015 Convergence: Is There Any Connection Between These World Events?
» Incredible shot UFO - Alien Spaceship - "birds" near the Sun - June 20, 2015
» Alien-Human Battle of 1979 in New Mexico: Alleged Eye-Witness Report, The Story of the Alien Base and Battle, Phil Schneider (Videos)
» Alleged Alien Picture from Bulgaria