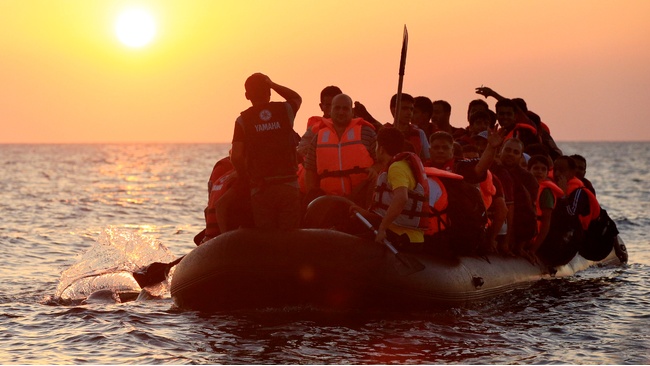 By Laura Piper on Thursday 3 September 2015

Candle-lit vigils and donation events are to be held across Scotland as the refugee crisis in Europe reaches critical levels.

Thousands of people across the country have rallied to give their support in the wake of shocking images shared by the media on Wednesday, showing the tragic plight of refugees.
The pictures of the lifeless body of a young boy – one of at least 12 Syrians who drowned attempting to reach the Greek island of Kos - brought home the full horror of the human tragedy unfolding on the shores of Europe as desperate families attempt to reach the west.
Images of the tiny dark-haired toddler washed up on a beach, who Turkish media later identified as three-year-old Aylan Kurdi, went viral within hours becoming the top trending picture on Twitter under the hashtag #KiyiyaVuranInsanlik (humanity washed ashore).
The body of his five-year-old brother, Galip, was later discovered nearby.

via Twitter
Overnight, calls for action filed in from across the country, with a public petition to the UK government to increase support for refugee migrants reaching more than 160,000 signatures.
In Scotland, plans to hold a candle-lit vigil in George Square received an overwhelming response, launching a chain of similar events across Britain.
"I’d been talking to a lot of my friends and family and a lot of us were feeling quite helpless," explained vigil organiser Alexis Stearns.
"A lot of things I have seen this week have enraged me. I watched a video of a family trying to get through an armed border. I could see they were hungry and desperate, but were being shot at.
"They were just mothers, desperately trying to help their children." 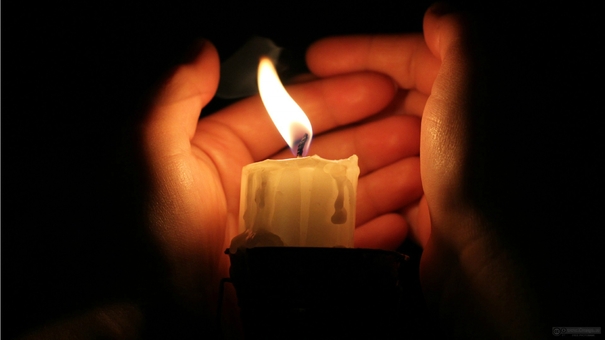 via STV
The mother-of-two launched Glasgow Sees Syria to encourage people to gather and light a candle to send a peaceful message of support to all of the refugees who have died, fled their homes and lost their families as a result of the Syrian war.
Wednesday’s dead were part of a grim toll of some 2500 people who have died this summer attempting to cross the Mediterranean to Europe, according to the UN refugee agency, UNHCR.
Thousands have pledged to attend the event on September 12, with people in other parts of the country set to hold vigils at the same time at the Scottish parliament in Edinburgh and Chichester's Cathedral Green, with more locations expected to be announced in the coming days.
Collection points are also being set up across the country to allow people to donate vital supplies to send aid to refugees in Calais.

via STV
Shelley Main, from the group Aberdeen Solidarity with Refugees, said: "We sometimes talk about human rights in this country, but what these people – and they’re the same as you and me – are suffering is beyond comprehension.
"In the last day or two, we have been in touch will scores of individuals, all of them volunteers, and there are collection points in Aberdeen, Stonehaven, Inverbervie, Inverurie, Drumoak, Insch, Peterculter, Bridge of Don, Banff....there are new ones being set up every few hours.
"None of us are interested in the politics of this: what matters is that refugees are given basic human requirements, such as shoes on their feet and a sleeping bag to keep them warm."
Emma Dempsey is organising a Portobello collection on September 12 for the city-wide CalAid Edinburgh project which has already raised £5000 online.
She said: "I wanted to get involved because I find it really hard to sit and do nothing and watch what is happening in Calais unfold, it is absolutely horrific.
"Calais is just a drop in the ocean. It is going on across Europe and internationally.
"This isn't something which is just going to go away, this is our future and we need to respond to it."
Meanwhile, Cyrenians chief executive Ewan Aitken is encouraging people who want to help the refugee crisis to support local organisations and food banks already running.
"[People] need to be saying to their Members of Parliament not just that we need to object to this but they need to challenge the narrative, to challenge the negative "swarm", "overrun" and essentially racist narrative that is around just now which dehumanises people in great suffering," he said.
"I do not want to be part of a nation that says that anybody who is coming and who is suffering but is different from me can't get in... that's a horrible place to live."
Today, the Celtic FC Foundation announced that its share of the proceeds from this weekend’s charity match between Dunfermline and Celtic Legends will be devoted to assisting those people affected by the current refugee crisis.
Celtic Chief Executive Peter Lawwell said: "Having seen the effects of this humanitarian crisis unfold in recent days, we felt as a club we should help in any way we can.
"Celtic was established as a football club to help people in need and this ethos remains a fundamental part of our club almost 130 years after our formation.
"None of us can understand the true horrors of this situation but as a club we wanted to show our support for those affected."
In Dundee, concerned residents have set up a citywide donations drive to collect blankets and essential supplies for those stranded at the Calais camps.
Those who wish to donate have been urged to drop off items at points across the city which will be delivered to France next week,
Professor Mike Press, head of art and design at Duncan of Jordanstone Art College, has set up a collection point at the DJCAD reception desk.
He said: "This is being done because of a sense of helplessness that everyone is feeling. If you look at the photographs of the last 24 hrs you think, 'it’s dreadful but there’s nothing I can do'. Well, we’re trying to give people a practical way to help." 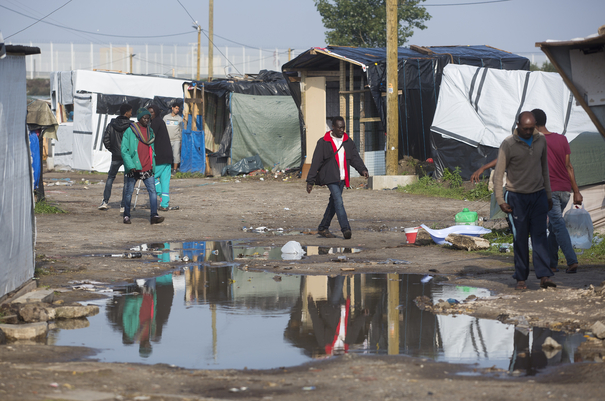 (Refugees at the camp in Calais, also known as the "New Jungle". CREDIT: Isabel Infantes/EMPICS Entertainment)

via STV
Dundee City Councillor Fraser Macpherson said he has raised the issue with the council’s director of housing and urged the council’s management to commit resources to help refugees.
Councillor Macpherson said: "I’ve now had quite a number of constituents getting in touch with me with grave concerns about human tragedy that is unfolding.
"I’m very keen that the city, Scotland and the UK as a whole is proactively doing everything it can. My own view is that the UK Government has been tardy in its response and yes, we could be taking in more refugees.
"I think Dundee has to be prepared to roll up its sleeves and help, and it’s very clear that a great many Dundonians want the city and the council to respond in a positive way.
"Every local authority and the central government should be playing a part in this too. It has to be a coordinated response across the country."
At First Minister's Questions on Thursday, Nicola Sturgeon pledged that Scotland will do "everything possible" to help tackle the humanitarian crisis.

Sturgeon: Scotland will do 'everything possible' to help refugees

She said: "As First Minister of Scotland, I pledge that I will ensure that Scotland does everything possible to help this refugee crisis.
"I will be far from the only person reduced to tears last night at the picture of a little boy washed up on the beach. That wee boy has touched our hearts, but his is not an isolated tragedy.
"He and thousands like him whose lives are at risk is not somebody else's responsibility, they are the responsibility of us all."
The First Minister also announced that she had set up a summit, to be held on Friday, with humanitarian organisations, including the Scottish Refugee Council, leaders of councils, civic organisations and religious leaders alongside opposition party leaders. 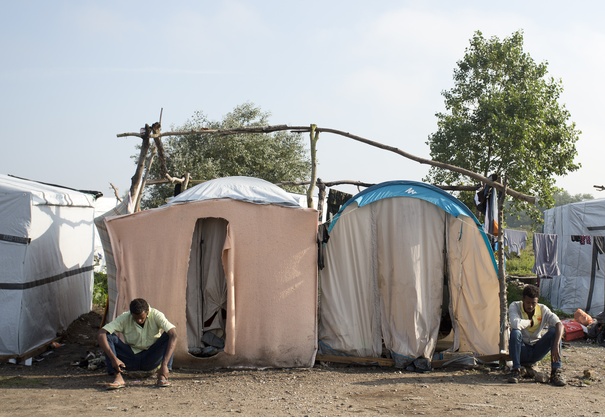 via STV
The Scottish Refugee Council are calling for 10,000 refugees to be brought to the UK through the Syrian Vulnerable Persons relocation programme, in operation since 2011.
Since it was founded, only 200 have been accepted in the UK through the scheme, with 67 of them coming to Glasgow.
Seeing that number increase is something that many feel would be a viable option.
"The fact that refugees can only apply for asylum in the first country they can reach is wrong," said Alexis Stearns.
"Greece isn’t economically stable enough to support them – all that will happen is a bottleneck of people unable to receive or to be given support.
"Britain is surrounded by water so they can’t reach us, but if local councils can all agree to take families in small numbers, we can easily take 10,000 refugees in Britain.
"If you break it up like that and keep it small, it becomes doable."
There are currently 433 principal authorities in the UK. If 10,000 refugees were to be dispersed across each authority, there would be an estimated 23 people in each area - or four to five families.
Fuad Alakbarov, a refugee campaigner assisting with Scotland's candle-lit vigils, agrees that Scotland could offer more support.
He said: "I believe it is good people who make good places. Scotland is a place of compassion and we can only benefit from opening our doors to those in desperate need.
"We will hold these events not as a protest, but as a peaceful vigil in response to a very real human crisis.
"We need to be humans first. Everything else comes second."
The Britain Sees Syria vigils will take place on September 12, starting at 2.30pm.
Additional reporting by Catriona MacPhee, Pamela Tulloch and Neil Drysdale. Main image credit: Jonathan Brady/PA Wire