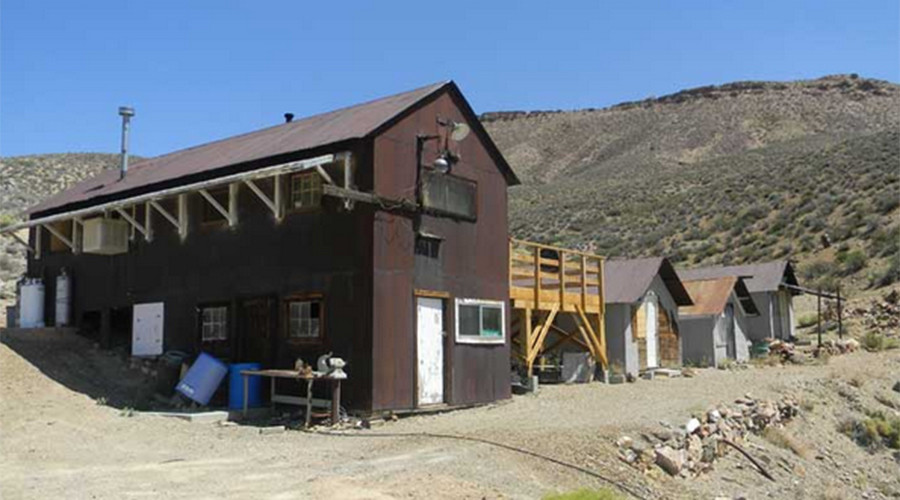 By Carey Wedler
A family that owns a lead and silver mine overlooking Nevada’s notorious Area 51 claims they have been violently harassed by the Air Force for six decades — as long as the government has sought control of the land. Their allegations range from illegal government searches and checkpoints to the Air Force attacking their property with military jets.
The Groom Mine has been in the Sheahan family since 1889 and has been passed down through several generations. However, co-owners Joe Sheahan, Dan Sheahan, and Barbara Sheahan-Manning told local CBS Las Vegas affiliate 8 News Now that since the 1950s — when the military built the base and started conducting U-2 spy plane tests there — the government has attempted to seize their land, resorting to sordid tactics in their efforts.
The family alleges that the Air Force went so far as to bomb their property, saying they believe an ore processing mill was destroyed in 1954 when an “errant bomb or dropped wing tank” blew it up.
Their grandparents “…went to the poorhouse trying to win their case of the mill that was destroyed by the Air Force,” said Sheahan-Manning. “We have some evidence they absolutely were the culprits in that, and it was never addressed.” News Now reported that “[t]he Sheahans say their buildings have been strafed and bombed by military jets over the past six decades.”
The family also says their land was “…showered by radioactive fallout from numerous above-ground nuclear weapons tests.”
According to the Sheahans, the military harassed them in other ways, as well. “They have driven away prospective business partners and told them, ‘If you buy the place or try to operate, we are going to condemn it, and you’re going lose your money,” Dan Sheahan claims.
In recent decades, the government cordoned off large portions of the area, manning them with armed guards. “They held people at gunpoint. They withdrew 89,000 acres of land, surrounded our property and made us an island,” Joe Sheahan said. Sheahan-Manning stated that she has been illegally searched and that for years, the government has forced members of the family to go through checkpoints to access their own property. “It seems like machine guns solve anything on the property out there. That’s not the American way,” Dan Sheahan said.

“We want ‘em to know what they have done over the last 60 years to our family is not acceptable,” he also commented, saying they did not want to go public but felt they had no other choice.
The Air Force recently offered the family $5.2 million for their 400 acres of land, but the Sheahans say the offer doesn’t come close to compensating them for the rich resources in the mine or the generations of memories the family has made there. “Either give us our property, leave us alone, or pay us what you owe us,” Joe Sheahan said. Further, as Sheahan-Manning said, “The truth is you can get more of a view of what’s going on on that base through Google Earth and pictures that are out there all over the Internet.”
Nevertheless, Colonel Thomas Dempsey, commander of the Nevada Test and Training Range Wing, stressed the importance of the land for conducting training and tests, saying the site’s infrastructure “…directly supports range activities that cannot be replicated elsewhere.” He cited national security concerns and protecting the environment as reasons to move forward with the confiscation.
“The Air Force has worked hard to be a responsible neighbor by actively working with the landowners and local neighbors to ensure our evolving missions and communities grew in a compatible, mutually beneficial manner,” Dempsey said. “But in this case, the Air Force has exhausted all reasonable options to reach a settlement with the landowners.” The family says it understands the need for national security, but argues the treatment they have endured is still unacceptable. If their allegations of harassment are true, the Air Force’s actions have hardly been “reasonable” or “mutually beneficial.”
The Sheahans expressed hope that their elected representatives will step in to help remedy the situation, but until then, they harbor serious apprehensions about the government’s decades-long siege on their land. “Is it okay to bomb your citizens, hold ‘em at gunpoint and then — just to add insult to injury — just steal their property?” Joe Sheahan asked.
“What the American people have got to realize is if they can do this to us, they can do it to each and every one of them,” Dan Sheahan warned. The family has rejected the Air Force’s offer and may face the government’s invocation of eminent domain on September 10, when the offer officially expires.

In 2013, the CIA admitted that Area 51 existed, but claimed it was used primarily for Cold War-era surveillance programs. In June, a NASA administrator said alien life likely exists, but it is not being kept at Area 51. Even so, theories persist that alien autopsies were conducted on the premises and similar activities still transpire there — and the Air Force’s relentless, desperate attempts to kick the Sheahan family off of their land does little to quell suspicions.
Regardless of whether or not extraterrestrial life actually exists at Area 51 is ultimately — at least in the Sheahan’s case — irrelevant. That the United States military is aggressively targeting private citizens with threats, harassment, and violence is currently a more pressing, dangerous revelation than the potential presence of alien life.
Image Credit
Carey Wedler writes for theAntiMedia.org. Anti-Media Radio airs weeknights at 11pm Eastern/8pm Pacific. If you spot a typo, email edits@theantimedia.org.
Carey Wedler joined Anti-Media as an independent journalist in September of 2014. Her topics of interest include the police and warfare states, the Drug War, the relevance of history to current problems and solutions, and positive developments that drive humanity forward. Living at her place of birth, she currently resides in Los Angeles, California. Learn more about Wedler here!

» ARE WE HUMAN BEINGS OR GOVERNMENT PROPERTY?
» MAGGIE RODDIN IS ON RBN ....Private Property!!!! we need how to fight ...agenda 21 ....Calif residents got back their agricultural zone!!!
» IVERMECTIN: THE EVIL EMPIRE FIGHTS BACK
» Japan - Back to Back Major Earthquakes - Near Populated Area
» Trey Gowdy Fights Back Tears During Impactful Epic Speech