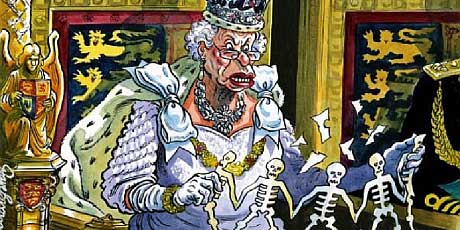 IN THE YEAR of the Queen’s Jubilee tourists peered as usual
Through the railings of Buckingham Palace,
But her fairy-tale was fading; the fairy queen’s wings were being clipped
By the Sex Pistols putting monarchy in their sights.
“God save the queen,” they sang, “it’s a fascist regime.”
And the song’s hook-line became a new anthem –
Disturbing to clutches of flag-wavers lining the streets,
And horrifying to Middle England and the Daily Mail.
The Sex Pistols proclaimed, “She ain’t no human being,”
And their subversive posters for the record
Placed the band’s salacious name right across the Queen’s lips
Masking her eyes with two spidery swastikas.
They sang, “I don't believe illusions ‘cos too much is real”.
They accessorized the Queen’s nose with a safety pin
Like a voodoo doll then covered her face with cutout letters,
As if presenting the world with a kidnapper’s note.
‘Oooh no,’ people would say, ‘you can’t have a go at the Queen,’
Sucking their breath in to indicate caution,
‘Oooh no, not the Queen, the Queen’s above politics you see.’
‘They can’t answer back, can they, so it’s not fair.’
Then they’d earnestly claim, ‘It’s in the constitution, isn’t it?’
Forgetting that Britain’s never had such a document –
For the Brits, despite their inordinate pride in their own history,
Can reveal they know less about it than anyone.
The country survives despite its own past not because of it
And its infantile wish for a benign parent above politics
Persuades it to ignore unpleasant facts, such as the sovereign’s endorsing
The very nastiest political act of all, namely killing.
For their sovereign’s dominant role is to inspect
Row after row of the state’s armed forces –
Broken down in training, reconfigured from scratch
And then programmed to kill on command.
The sovereign is crucial to the lubrication of Britain’s wars
By its gulling soldiers into dutifully dying;
Then, after paying homage to such victims of state carnage,
By its encouraging arms-trade profiteering.
Arms-makers and their customers are brought together
At Windsor Castle to be honored with fly-pasts –
Monarchy and military business being intimately connected:
The UK’s ‘Defense Industrial Base’ is a royal brand.

A landowning cabal with its heraldry denoting privilege
Still forms an elite network that stakes out the land,
And retains monarchy as its god to deceive those living here
Whose Common land they once stole and enclosed.
The monarchy’s militarism echoes a time when royalty wasn’t flouted –
When to criticize royalty was treason and when those threatening
The status quo could be seized, and their limbs tied to horses
Which took off in every direction as they were whipped.

On seeing royal victims torn to shreds while still alive,
Royal minions sliced their hearts into sections
Then dispatched them across the country for public display,
As a warning to anyone considering rebellion.
In the past, the brute power of the monarchy was this unrestrained
Whereas now it pretends to more decorum
By dressing in fancy costumes, and awarding itself unearned medals,
And laying wreaths to those dying in its name.
For its politicized charisma still yields a large body-count;
Lives are still culled by its ‘Queen and country’ spell;
Royalty routinely pays its dead subjects with a march-past
When they’re boxed up and returned to where they once lived.
Meanwhile royalty’s own patriotism bears scant inspection:
It being revealed in 1915, in World War One,
That when millions were dying in Flanders for King and Country,
The King himself was tobogganing in St Moritz.
He returned to set a record for shooting Sandringham pheasants
As he cut his annual swathe through its wildlife;
Similarly, in 1939, George VI determined that the war
Shouldn’t “interrupt the grouse season at Balmoral.”
The UK’s military-monarchy-complex is a cynical industry
For which the Queen was groomed by a General Browning
And, likewise, Prince William’s mentor has been Blair’s wartime apparatchik:
The UK’s former man in Washington, David Manning.
“It is Manning who is running the conflict with Iraq.”
Wrote John Kampfner, the author of ‘Blair's Wars’.
Thus the heir to the heir is being initiated by a prime mover
In Britain’s centuries-long killing sprees.
While all the time royalty profits from arms, due to its Crown Agents
Who tend to its shares in Lockheed, makers of cluster bombs
And nurture bundles of the royal investments in BAE Systems –
In its Depleted Uranium shells and its landmines.
The latest landmines are designed to leap up out of the ground,
Triggered by children playing or walking nearby.
They’ll detonate in mid-air and they’ll sever limbs as bodies fall
While the shareholdings of the super-rich rise.
The Times has claimed the sovereign’s wealth grows yearly by 20m
And in 2010 it announced the Queen “crowned a successful year
For her share portfolio, with a personal fortune totaling £290m”
Though elsewhere others have assessed it in billions.
Yet confronted by the true cost of UK weapons exported abroad,
Namely the Indonesian massacres in East Timor,
Her son Charles said, “If we don’t sell arms to them, someone else will,”
Blithely exposing the monarchy’s moral vacuum. 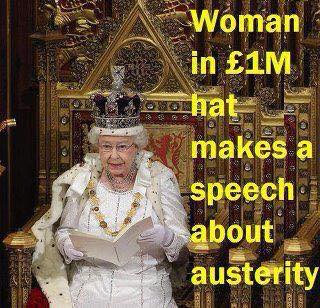