OUT OF MIND » THE INSANITY OF REALITY » FINANCIAL COLLAPSE » 30 Plus Cold Hard Facts About The IRS | An Agent of a Foreign Corporation, A Collection Entity for The Federal Reserve Bank

30 Plus Cold Hard Facts About The IRS | An Agent of a Foreign Corporation, A Collection Entity for The Federal Reserve Bank Tue Sep 08, 2015 1:17 pm 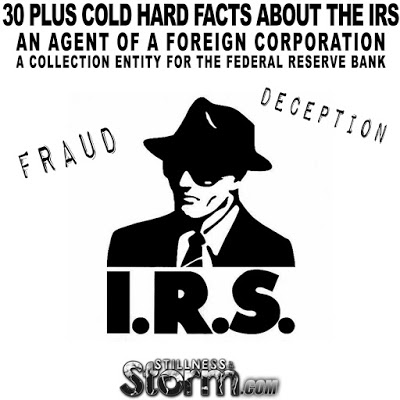 The following is an analysis of the legal and contractual structures enshrouding the Internal Revenue Service. Many people never question the validity of this nefarious organization, and as a result their compliance to tyranny is consent to slavery. But the letter of the law, as it is described within United States Code, the legal statute, actually only applies to agents of government; employee's. As a result, all taxation under the IRS is a deceptive fraud, and once this is realized, we can begin to withdraw from this fallacious system.


The money masters of this world have long used methods of secretive control. They push propaganda and intentionally hide the truth to maintain the debt slavery systems that have destroyed the social fabric of the planet.

But with knowledge comes power, and when the truth about the IRS and how it is legally framed are understood, we will be empowered to pull ourselves out of this system of energy harvesting. The people have always had the power to end these systems, but it must be a coordinated effort based on key knowledge and understanding.

The national debts of nearly every nation on earth are an elaborate fraud. These debts are what keep society locked into self-destructive modes of behavior - many people just can't conceive of a better way and consent to slavery in the absence of knowledge.

Together we can change the world for the better, but divided we remain a conquered people. When will enough be enough? When will be realize our innate co-creative powers and begin living a life recognizing the fundamental interconnectedness of all things?

I, for one, am starting now.

The second plank of Karl Marx’s communist manifesto calls for a heavy progressive or graduated income tax. This identical immoral and illegal tax structure plagues our country today. We now have socialist and communist politicians who masquerade as Democrats or Republicans. Is there any wonder why so many campaign promises are never kept? Here are some facts concerning this terrorist organization.

The Internal Revenue Service (IRS) is a private Corporation, incorporated in Delaware in1933, and operates under international treaty. (See Public Law 94-564 Reorganization Plan #26) 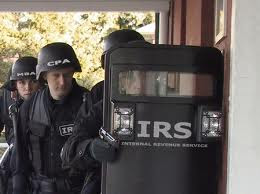 Those who rule the world under this umbrella are the Illuminati, the Bilderberger group, the Council on Foreign Relations, and the Trilateral Commission.

The IRS is also an Agency of the International Criminal Police Organization, and solicits and collects information for 150 Foreign Powers (22 U.S.C.263a).

The IRS is directly engaged in the solicitation and gathering legally protected information of a private and personal nature on everyone contained in their files of records, and does distribute that information to the other member agencies throughout the world without the knowledge or consent of the parties involved (22U.S.C.A. 611 (c) (II)).

The IRS as a paramilitary organization may not impose military authority into civil affairs (D.O.A. 27100-70).

The IRS acting as the Agent of a Foreign Principal, “the Bank” and “the Fund” under the United Nations Charter, Article 2, Section 7 prohibits the U.N. and its Administrative Agencies from “intervening in matters which are essentially within the domestic jurisdiction of any state”.
The IRS comes before the courts only as the non- registered Agent of a Foreign Principal, acting in the person of its own corporate capacity.

Acting in its corporate capacity the IRS is engaged in commerce as a collection agency under contract. None of the money that you pay in goes to any program or compelled benefit like you think it does. Almost all of the income tax goes to pay the interest on the so-called “debt” to the Federal Reserve (for illegal fiat money conceived by our bureaucrats, and large corporations), not into the U.S. Treasury. John F. Kennedy warned the people of this fraud and issued executive order # 11.110 on June 4, 1963, and the Treasury started to issue United States notes that looked like our familiar Federal Reserve Notes but only cost the people the cost of paper, ink and printing. Within months he was dead.

Then Lyndon Johnson inactivated the executive order, and U.S. notes were withdrawn and replaced once again with Federal Reserve notes. Look on the back of any check you have written to the IRS. It will say, “Pay to any branch of the Federal Reserve Bank”. This is an illegal conversion of funds. All government sponsored programs and compelled benefits come from money continuously borrowed from the Federal Reserve. This is why our paper money is now described as a ‘note’ instead of a ‘silver certificate’. It is illegally loaned in to existence, and has no value except for the faith the American people put in it.

A note for a thing is not the real thing. When you use Federal Reserve Notes instead of real money (silver certificates, silver or gold), you are simply making a promise to pay, not actually paying. Since the dollar is a unit of measurement, just like a ‘pound’ of coffee or a ‘quart’ of milk, and there is nothing of hard value backing the dollar, what is it a dollar of?

Sure, you buy goods and products with Federal Reserve Notes, but that which you have of appreciable value could be taken from you without due process of law,simply because you never owned the money in the first place. Look it up. Every time we spend a dollar, we are re-circulating a dollar that was loaned in to existence. It is because of this debt structure that our nation has a multi trillion-dollar deficit that can never be paid. Your government has your property listed as collateral against the Federal Reserve Notes (promises to pay) they continuously borrow. The only thing that keeps homeowners from being on the street is the Federal Reserve not calling their note due. When they do call their note due, every man, woman and child will then be their slave.

Thomas Jefferson said, “ If the American people ever allow private banks to control the issue of their currency, first by inflation and then by deflation,the banks and corporations that will grow up around them will deprive the people of all property until their children will wake up homeless on the continent their fathers conquered”.

The IRS acts on the presumption that assigned foundational agreement/instrument exists between the United States and the citizen/franchisee knowing that very few citizens/non citizens have the knowledge or the courage to resist their extortion.

The IRS leadership has departmentalized the functions of tax collection to purposely limit and discourage the exchange of information and/or the lack of authority, between the departments to prevent low level employees from discovering the true nature of their assignments and thus prevent disclosure and whistle blowing.


IRS references made to any authority for collection proceedings under Title 26 CFR, Subtitle A, are made under color of law as there is no collection authority authorized within Title 26, only penalties for failure to perform a given function.

All Collection authority is found in Title 27 CFR, Part 70 and pertains only to alcohol, tobacco, firearms and explosives (Stamp taxes or duties).

Many IRS agents often use alias names and are paid commissions, written to their real name, on what ever they steal from you.

The IRS is unable to provide documented proof of the authorization that enables the IRS to operate outside the District of Columbia, and insular possessions of the United States, such as Guam, Puerto Rico, Virgin Islands, Philippines, and American Samoa, as required by Title 4, U.S.C., Section 72.
The IRS uses false documents and presentments that have no legal authority behind them, i.e. 1040 form, Notice of Levy, etc., to solicit and extort money from you using the United States Postal Service. They also falsely represent themselves on the outside of their envelopes, to be an agency of the United States department of Treasury. Therefore, the Internal Revenue Service is guilty of the crime of Mail Fraud and False Representation.

The IRS agents have no legal authority to demand anything from you, if there are no 3rd party informational documents sent to them with your name on it. They unlawfully and unconstitutionally misapply the revenue laws in an effort to compel you to supply them with confidential information when in fact, their own IRC, 6103, Section (h) and (j) says that they could use this information against you in a criminal proceeding. This is a gross violation of 4th and 5th amendment rights, which are legally protected by the U.S. Constitution. This is pure extortion. You have the lawful right to correct informational documents, such as W2's, and 1099's, and demand that they recognize you as one “who does not enjoy the privilege of federally connected employment”.

When are the American people going to wake up and realize that our so-called leaders are co-conspirators with the most evil organization ever contrived?

This is the vilest fraud ever perpetuated on a free people. People in this country need to ask themselves if they were created for the purposes of the IRS and those who conspire with them, or were they created for the Glory of God. Are we going to continue giving to these ungodly, corrupt, and spiritually wicked people the power that belongs to God?

In the book of Genesis, Adam and Eve gave us the first example of the consequences of ‘obedience without question’ to someone other than Almighty God. The result was separation from God, and His fellowship. If it is not of God, it is of the devil. This is a very simple truth that will never change.

OUT OF MIND » THE INSANITY OF REALITY » FINANCIAL COLLAPSE » 30 Plus Cold Hard Facts About The IRS | An Agent of a Foreign Corporation, A Collection Entity for The Federal Reserve Bank