OUT OF MIND » THE INSANITY OF REALITY » GOVERNMENTS & THE NEW WORLD ORDER » Exclusive: John McAfee Files For Presidency 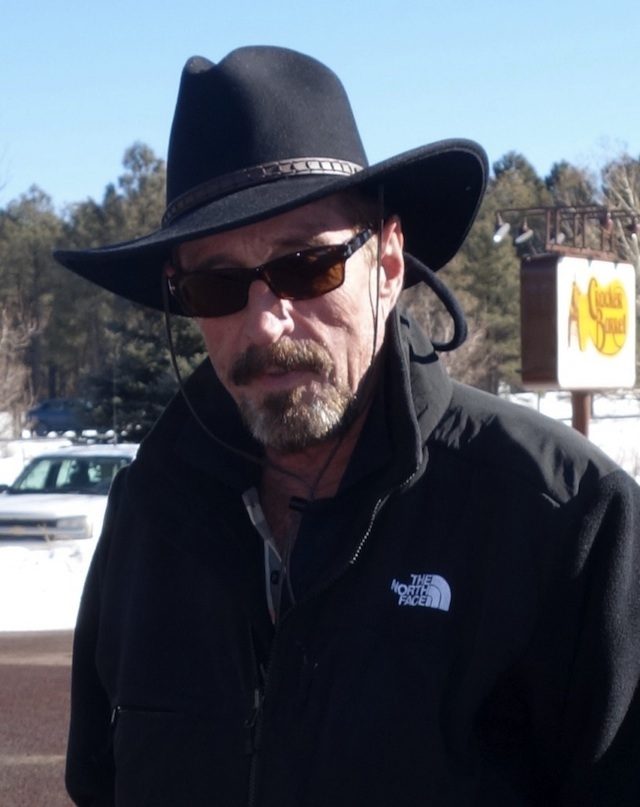 The craziest story of this last week? It’s an easy call—John McAfee’s self-told tale of becoming a spymaster in Belize, passing out malware-laden laptops to officials and overseeing a ring of 29 “operatives” who distributed and monitored the computers.

McAfee, a one-time American antivirus expert, left the US for Belize a few years back and quicklyslipped into his own “heart of darkness” at his jungle estate. He’s been specializing in nutball behaviorand eventually got himself raided by an elite Belize police squad which believed he was operating a meth lab on the property. Next, McAfee’s neighbor was murdered and McAfee went on the run, telling anyone who would listen that the Belize police were going to kill him (they said only that they wanted to question McAfee about the murder and that he was not a suspect). Now, back in the US after slipping across the border to Guatemala—a long and crazy story of its own—McAfee has taken again to his own blog to regale us all with the tale of John McAfee, spy chief.


I purchased 75 cheap laptop computers and, with trusted help, installed invisible keystroke logging software on all of them—the kind that calls home (to me) and disgorges the text files. It also, on command, turns on, and off, the microphone and camera—and sends these files on command. I had the computers re-packaged as if new. I began giving these away as presents to select people—government employees, police officers, Cabinet Minister’s assistants, girlfriends of powerful men, boyfriends of powerful women. I hired four trusted people full time to monitor the text files and provide myself with the subsequent passwords for everyone’s e-mail, Facebook, private message boards, and other passworded accounts. The keystroke monitoring continued after password collection, in order to document text input that would later be deleted. So nothing was missed.
I next collected my human resources for the complex social engineering I would have to do. I arranged with 23 women and six men to be my operatives. Eight of the women were so accomplished that they ended up living with me. It was amazingly more efficient and they were easily convinced to check up on each other. One was so accomplished (Marcia) that she became a double agent and nearly got me killed.

Of course, this massive operation in which one gringo decided to spy on half the Belize government went off without a hitch, and McAfee become something of a godlike super-spy. “What I found was, for the most part, expected,” McAfee wrote. “Uncountable numbers of sexual affairs—embarrassingly lurid and intimate chats. Multiple, simultaneous protestations of love, and jealousy, and anger.” No one could resist his operatives: after sending “increasingly irresistible women” to a local political boss, McAfee eventually tried “an alternate chromosome configuration and—success at last.”

Computers weren’t enough. McAfee says he wanted to wiretap his targets, too. He allegedly went to two local phone companies and “locked onto a number of key players who had access to the technical processes involved in tapping phones and delivering lists of phone contacts.” His team, he said, then drew up “contact information for appropriate wives and husband of these key players, knew the names of the employees’ drug providers (if any), names of respectable family members, and names of all the other ‘side interests’ of the targets. Being ‘pillow talk’ masters, they also knew, and had verified, every secret thing the persons had ever done.”

Every secret thing the persons had ever done!

You will not be shocked to learn, dear reader, that McAfee’s massive spy operation didn’t just reveal some petty corruption or embarrassing secrets but rather the existence of a Hezbollah trafficking network that funneled 11 Lebanese men a month into America. And, of course, these were probably terrorists; one man had plans to make deadly ricin from plants being grown in a Nicaraguan training camp.


I know all of this because I reassigned resources and for the past three months have had two people in Nicaragua that have made connections with the Hezbollah camp and I have three people in Mexico who have made connections with mid-level Zeta [a drug gang] members. I will release no information at this point that will implicate these five people.

What led McAfee to launch one of the most brazen spy operations by a private citizen against the state of Belize? Who knows! He certainly doesn’t.

“I’m not sure what I expected to gain,” he wrote. “The satisfaction of revenge perhaps—to some extent—what little satisfaction there is in revenge. As a way to get my stuff back? Maybe. For the sheer joy of muscle flexing? I can’t answer precisely. Much of my life is a mystery to me. Suffice it to say: I just did it because I could.”

It’s fairly hard to believe any of this. McAfee has a long history of faking heart attacks, writing bogus blog posts, and engaging in calculated crazy behavior. Consider, for instance, this passage from a long Wired profile of the man:


Two years after moving to Belize, McAfee began posting dozens of queries on Bluelight.ru, a drug discussion forum. He explained that he had started to experiment with MDPV, a psychoactive stimulant found in bath salts, a class of designer drugs that have effects similar to amphetamines and cocaine. “When I first started doing this I accidentally got a few drops on my fingers while handling a used flask and didn’t sleep for four days,” McAfee posted. “I had visual and auditory hallucinations and the worst paranoia of my life.”
McAfee indicated, though, that the heightened sexuality justified the drug’s risks and claimed to have produced 50 pounds of MDPV in 2010. “I have distributed over 3,000 doses exclusively in this country,” he wrote. But neither Emshwiller, Adonizio, nor anyone else I spoke with observed him making the stuff. So how could he have produced 50 pounds without anyone noticing?
McAfee has a simple explanation: The whole thing was an elaborate prank aimed at tricking drug users into trying a notoriously noxious drug. “It was the most tongue-in-cheek thing in the fucking world,” he says, and denies ever taking the substance. “If I’m gonna do drugs, I’m gonna do something that I know is good,” he says. “I’m gonna grab some mushrooms, number one, and maybe get some really fine cocaine.
“But anybody who knows me knows I would never do drugs,” he says.

So who knows—perhaps this is just McAfee’s attempt at some crime fiction. (It’s named, after all, “A Clear and Present Danger.”) If so, though, it’s not a bad read. 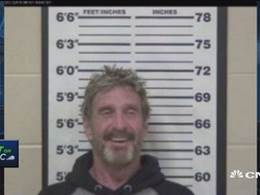 PLEASE NOTE: SEVERAL VIDEOS INCLUDING THE ONE THAT WENT WITH THIS HEADER DETAILING MCAFEE AND HIS LEGAL ISSUES ARE NO LONGER AVAILABLE. SO FAR ALL I AM GETTING IS DELETED BY OWNER BUT I WILL KEEP LOOKING. INTERESTING DON'T YOU THINK? THAT AND THE FACT THAT ALEX JONES, CABAL MOUTHPIECE EXTRAORDINAIRE, "BREAKS" THIS STORY?

He was arrested for murder, illegal entry into Guatemala, DUI, illegal weapons charge and he is going to run for president.

He will fit right in. Criminal megalomaniac. Seems perfect for the job.

OUT OF MIND » THE INSANITY OF REALITY » GOVERNMENTS & THE NEW WORLD ORDER » Exclusive: John McAfee Files For Presidency