RECENT ACTIVITY AND HIGHLIGHTS
NUFORC HOMEPAGE UPDATED ON FRIDAY, SEPTEMBER 11, 2015
The NUFORC website has been updated, with the posting of 212 new entries in our database of sighting reports.  We encourage visitors to the site to be on the lookout for flawed reports and hoaxes.  If you encounter a report that looks out of place, or which appears to contain errors, please call the report to our attention by sending a note to director@ufocenter.com, and we will address the issue at our earliest convenience.
RADIO APPEARANCE
Peter Davenport, Director, is scheduled to make his weekly appearance on Coast to Coast AM (hosted by George Noory, at 10:15 p.m. (Pacific) on Friday night, September 11, 2015.  Some of the reports that Peter will discuss appear below:
·         Ashland, Oregon, Saturday, September 05th, 2015, @ 2330 hrs. (PDT)—During their third night of camping out in their family yard, two young boys suddenly become alert to the fact that there is an intensely bright, pulsating, source of light above them, and illuminating their tent.  They peek outside, and apparently are seriously frightened to witness a brightly illuminated disc-shaped object above them.  They race inside the house and alert their father to the event.  Witness Report
·         Gibbon, Minnesota, Sunday, September 06th, 2015, @ 2100 hrs. (CDT)—A husband and wife, out walking their dogs, become aware of a thin, dark object, which appeared to be located between them and a distant lightning storm.  They quickly realize that it appears to be getting smaller, suggesting to them that it was moving almost directly away from them.  The object appeared to move slowly into the mass of storm clouds.  Husband’s Report    Wife’s Report
·         Mayflower, Arkansas, Thursday, September 10th, 2015, @ 2021 hrs. (CDT)—Three adults witness a very bright white light move across the night sky, make several abrupt maneuvers, and then stop motionless in the night sky.  The object appeared to display a complex pattern of blue and white lights.  The witness reports that the power in the town of Mayflower was temporarily interrupted, until the object flew off and disappeared from sight, approximately 2 minutes later.  Witness Report
We also would like to encourage visitors to our site to read the many reports posted for September 05th and 06th, 2015.  NUFORC received 73 written reports for those two days.  Many of those reports describe clusters of red and orange lights, which NUFORC has been reporting on for many years.  This photo, taken over Mt. Washington, Kentucky, on the night of August 13, 2015, is exemplary of the many such reports our Center has received.
Statement posted on Friday evening, September 11, 2015. 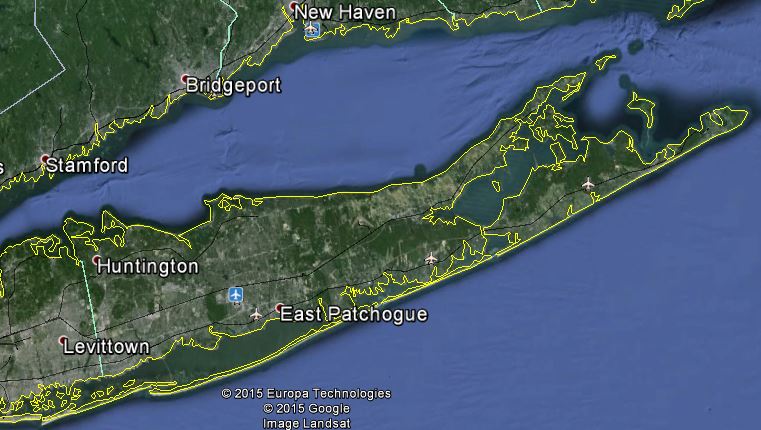 MANY UFO ORB SIGHTINGS OVER LONG ISLAND SOUND N.Y.
LABOR DAY 2015 ……….NEW YORK LONG ISLAND
One of my readers contacted me late Labor Day night with an email to tell me about her sighting of a large Orb.  Since her sighting occurred so close to my own house I called her the next day. She told me she was at a barbecue held in the yard of her sisters house  who lives  along the coast of Long Island Sound which is a body of water between Connecticut and Long Island New York.  The woman was sitting in her sisters yard located in the town of Huntington New York  which looks directly over the water. As night fell the party sat on her sisters deck eating corn on the cob , burgers and hot dogs enjoying the beauty of the water  and the night sky. The woman told me a few small planes passed over the water as well as a low brightly lit  helicopter during the evening before they noticed the orb.  Her husband was the first to notice it. He told her he watched as it came from the east at an enormous speed which told him at once it was not a plane or any man made craft. It slowed down over the water in the Huntington area about half way over the Long Island Sound and started a slow large oval orbit .  The object was  a solid white orb without any flashing lights and was completely silent.  At this point the woman’s husband asked his old friend, who was also at the party, who  had been a pilot in the military to walk down to the waters edge with him. He pointed out the strange object and both men watched it for a few minutes as the object continued to slowly and silently orbit above the water.  The men walked back to the party where they pointed out the object and the strangeness of its appearance to the others on the deck when the object stopped its orbit and just hovered over the water.  The woman told me that she was very excited and a bit nervous at seeing this object as she knew it was something that was not the normal type of thing she saw flying in the sky. The ex military pilot suggested to the home owner that they may want to call the police and report an odd object flying over the water. The people all laughed at the idea . In fact the other people at the party had little or no interest at all in this odd craft hanging in the night sky. This reaction was as odd as the craft to the couple and the pilot and his wife as they knew they were seeing something extremely unusual.

One member of the party waved his hand in the air as he insisted it was just something one of the neighbors were doing. The pilot knew this was a severe case of denial as the object was large and clearly under intelligent control and was stunned by the mans insistence it was nothing at all.   The pilot and his wife gathered their belongings and left the party telling the woman’s husband that he should leave and head out of the quiet neighborhood as he felt the object was aware of the people watching it and he felt it could be dangerous to stay sitting in the dark as easy pickings or targets. The woman and her husband also left the party.   She told me the object had a perfect white orb of light that covered most of it but  you could clearly see that the object was oval in shape and gun metal in color under the light. It had no strobe or flashing  lights at all and made no sound. It was able to make hard turns at great speeds and would simply stop and hover at will at different points during the time it orbited over the Long Island Sound. She also told me she felt fear when she looked at the orb which was shared by her husband and the pilot and his wife. The strangest thing this woman told me was that both her husband and the ex- military pilot  took pictures of this craft with their cell phones but found nothing on the phones when they later tried to view the photo’s.  I will be watching the sky over my area carefully now that I know the orbs are once again back over Long Island. The truth most likely is that they never left!  I will be sure to report any more orb reports I receive as the on going orb sightings continue over Long Island New York.  NOTE: The above image is a rendering.
KEN PFEIFER WORLD UFO PHOTOS AND NEWS
WWW.WORLDUFOPHOTOSANDNEWS.ORG
WWW.WORLDUFOPHOTOS.ORG
SPECIAL THANKS TO MY FRIEND CHRIS HOLLY
CHECK OUT THE STORY ON >>  [size=16]http://endlessjrny.blogspot.com[/size]

This is a silver metallic UFO. The cloak it is using makes it appear whitish. The object is near the cloud to try to observer and be hidden. This video was taken by Luli Kasapi of Youtube and they have a very steady hand, and skill for catching UFOs. If you can, can you please click the thumbs up on her video to help encourage her?
Scott C. Waring
www.ufosightingdaily.com