» The Hidden City of Death Valley

» Scientists BAFFLED as GIANT Star just Disappears! OR is something BIGGER Hiding it??

» “Bill Gates We Are Not Your Lab Rats!” Africans Protest COVID Vaccine Trials Among Poor

Today at 1:26 am by RamblerNash

Yesterday at 6:44 pm by Consciousness Of Economic

Yesterday at 6:43 pm by Consciousness Of Economic

Yesterday at 6:42 pm by Consciousness Of Economic

Yesterday at 6:40 pm by Consciousness Of Economic

» What is Dirty Electricity?

Yesterday at 6:39 pm by Consciousness Of Economic

Yesterday at 6:38 pm by Consciousness Of Economic

» Can You See Now? They Are Building A Parallel Global DLT Settlement System - Ripple / XRP / News

Yesterday at 6:36 pm by Consciousness Of Economic

Yesterday at 6:35 pm by Consciousness Of Economic

OUT OF MIND » PERCEPTUAL AWARENESS » THE SHIFT IN CONSCIOUSNESS » A Journey Through Space, Time, & Far Out Dimensions – The Life-Changing Impact Of Past Life Regression

A Journey Through Space, Time, & Far Out Dimensions – The Life-Changing Impact Of Past Life Regression

A Journey Through Space, Time, & Far Out Dimensions – The Life-Changing Impact Of Past Life Regression

By Ryan Boyd 15 September 2015
Written by Jeff Roberts
It was 1968 when the late Dolores Cannon’s life would take an unimaginable turn.
At the time, 37-year-old Dolores was living out of a Texas naval base with her husband and three children, leading the typical navy wife life. But her ordinary days would soon shift when a resident doctor asked Dolores and her husband if they could assist him in implementing a cutting-edge therapy on one of his patients, to which they curiously agreed.
The female patient suffered from Nervous Eating Disorder and kidney problems, and the doctor thought hypnosis would be an effective method in helping her relax. But something strange happened midway through the session, the woman began describing a past life in which she was a flapper dancer, living out of Chicago during the roaring 1920’s. Remarkably, Dolores watched as the woman transformed into someone else – voice, mannerisms and all. This would be her first taste of past life regression, a field of therapy completely uncharted at the time.
It wasn’t until a decade later in the late 70’s, when Dolores and her family had relocated to the quiet hills of Arkansas after her husband had suffered serious injuries from an automobile accident, that Dolores would revisit the peculiar practice of hypnosis.
Here, Dolores began inducing curious clients in her small home town, done without the help of any resource or guidebook, because at the time there were none. However, this lack of guidance proved to be invaluable to Dolores because it gifted her the freedom to develop her own unique method, one that would later change how the entire world understood the field of regressive hypnosis.
Since then, over the last 4 decades, Dolores Cannon has written 19 books on numerous topics including reincarnation, past life hypnosis, E.T. abductions, life after death, and much more, during which she developed a powerful and world-recognized method of hypnotic induction called “Quantum Healing Hypnosis Technique (QHHT).”
The technique induces clients into the deepest of trance-like states, taking them into the furthest corners of their psyche where they visit latent emotional traumas that have been locked away for any number of years, often dating back to previous lifetimes.
It’s during this process of exploration that clients gain insights into their current psychological or physical wounds, giving them the power to finally release old blockages, heal, and move forward in their daily life. Today, the QHHT is taught worldwide, helping an unprecedented number of eager clients looking for a less conventional therapeutic approach.
Although the world was sad to see Dolores pass away on October 18th, 2014, her legacy and her extraordinary work continues on today through her interviews and most notably her collection of books. Before she passed, Dolores completed her fifth volume in what can be seen as her Magnum Opus, the Convoluted Universe series. 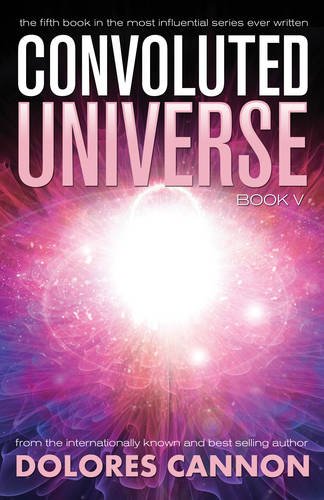 The Convoluted Universe: Vol. 5 takes readers on a voyage through space, time, and far out dimensions, detailing the furthest reaches that past-life regressive hypnosis can take you. Ozark Mountain Publishing (2015).

The series encapsulates a vast collection of her QHHT client sessions, taking readers on a voyage through space, time, and far-out dimensions. It stands as an encyclopedia of non-ordinary accounts of the extraordinary, challenging the belief systems of even the most open-minded individuals, while inspiring us to question the ultimate possibilities of our existence in this vastly complex universe.
In every chapter of the Convoluted Universe: Volume 5 , Dolores’s clients regress to a specific moment, or a series of interconnected moments, during one of their past lives. This can find them in some of the most unusual of places.
Some clients regress to lives as ETs on deserted planets, collecting rock samples or gathering data, while others have found themselves on ancient Earth as part of a royal lineage. Occasionally clients regress back to a time when they were merely a formless light being, simply observing their foreign surroundings. Some clients relive violent deaths, abusive relationships, lonely days in the wilderness, or in some cases they even experience what it is like to be one with the entire universe, or god.
But there is always a purpose to every moment a client is shown, and that is to learn a lesson or insight to take back with them into their current life.  These lessons can be as complicated as witnessing the destruction of their home planet in a past life in order to help them come to terms with the fear of loss in their current lifetime. In Chapter 17 of the Convoluted Universe: Volume 5, for example, one 50-year-old female client learns that she came to Earth to learn the simple but painful lesson of what it is to be human.
Whatever the lesson may be, the one constant for every client is that they come out of the session with a new understanding of their challenges and their purpose, in turn usually changing the course of their life forever. This alone speaks to the importance of Dolores’s work.
When I finished Convoluted Universe: Volume 5 , there were many thoughts and emotions running through my head. At first, I felt a sense of sadness that Dolores’s incredible saga was coming to an end, and that I may never get to read another book written by such a remarkable woman. But the sadness quickly dissipated as a new sense of completion set in. Regardless of whether or not we get another book from Dolores, her work has touched us in a way that will never be forgotten, and will no doubt stand the test of time for future generations to delve into.
Perhaps the most important takeaway from the book and all of its predecessors is that it encourages us to believe in a grander picture, one that transcends the tiny worries of our everyday lives, exposing the inner mysteries of the universe and teaching us that everything we experience, whether large or small, is part of something grander and more complex than we could ever imagine.
Thank you, Dolores, for all of the imagination and wonder you’ve sparked in us through your life’s work, instilling hope that we are all not only a part of something so large and convoluted, but also meaningful and perfect.
Originally posted @ Collective Evolution

OUT OF MIND » PERCEPTUAL AWARENESS » THE SHIFT IN CONSCIOUSNESS » A Journey Through Space, Time, & Far Out Dimensions – The Life-Changing Impact Of Past Life Regression