New Self, New World: Recovering Our Senses in the Twenty First Century If we were to consider the towering crises faced by the 21st century and trace them to their roots, we would find that each of them leads back to the same cultural force: the one that tells us who we are. Culturally speaking, ‘living in the head’ is the elephant in the room: it dominates all we do, and no one seems willing to start a conversation about it. New Self, New World initiates that conversation.
Written by author Philip Shepherd, New Self, New World traverses disciplines and boundaries with ease and precision, gathering wisdom as it goes. It is a philosophical masterwork, a spiritual handbook, a sweeping historical renewal of the human story, and an alignment of the profoundest mystical teachings of the world. Between its two covers awaits a lifetime of adventure.
New Self, New World is available here on Amazon, or visit PhilipShepherd.com for more information.
About the author: 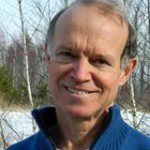 Philip Shepherd is recognized as an international authority on embodiment. His unique techniques have been developed to transform our experience of self and world and are based on the vision articulated in his celebrated book, New Self, New World. Philip understands that most of our problems, individually and globally, stem from a single root cause: we have created a culture of disconnection. The approach he takes heals the frantic, restless pace of the intelligence in the head, which tends to run on overdrive, by uniting it with the deep, present and calm intelligence of the body.