OUT OF MIND » CHANGING ENVIRONMENT & NATURE » EARTH CHANGES » The Opening of the Abyss: Siberia's 'hell mouth' craters opening up 107 years after Tunguska event

The Opening of the Abyss: Siberia's 'hell mouth' craters opening up 107 years after Tunguska event

The Opening of the Abyss: Siberia's 'hell mouth' craters opening up 107 years after Tunguska event 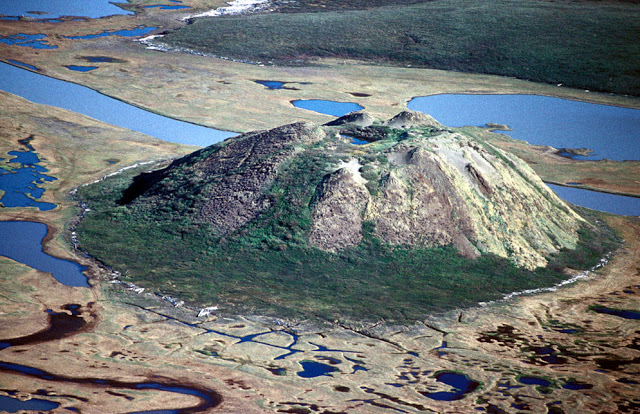 With Bible prophecy very much in vogue recently regarding blood-moons, sign and wonders and speculation over how dangerous the CERN experiments are in regard to opening passages for demonic beings, I have myself had a quiet eye on a phenomenon which so far has stayed under the prophecy radar.
In June 1908 many people witnessed what they thought was a meteor flying over Siberia, after the meteor appeared to slow down it blew up, the explosion 1000 times stronger than the Hiroshima bomb in the second world war... exploded about 6 miles above Krasnoyarsk Krai, Russia.
Fast forward 107 year on and scientists are finding new enormous sink holes in northern RussiaYamal Peninsula in Siberia and they are so far clueless as to what is causing them, although climate change has been banded around as the cause.
The spectacular sinkholes, appeared as out of nowhere in the permafrost of the area, sparking the speculations of significant release of greenhouse gas methane into the atmosphere.
The Tunguska event which some Bible scholars quietly assume was the moment Satan was thrown down to earth occurred near the Stony Tunguska River, in what is now Krasnoyarsk Krai, Russia, on the morning of June 30, 1908.
The explosion over the sparsely populated Eastern Siberian Taiga flattened 2,000 km2 (770 sq mi) of forest and caused no known casualties.
The cause of the explosion is generally thought to have been a meteor.
It is classified as an impact event, even though no impact crater has been found; the meteor is thought to have burst in mid-air at an altitude of 5 to 10 kilometres (3 to 6 miles)
Different studies have yielded varying estimates of the superbolide's size, on the order of 60 to 190 metres (197 to 623 feet), depending on whether the meteor was a comet or a denser asteroid.
It is considered the largest impact event on Earth in recorded history.
While more modern supercomputer calculations that include the effect of the object's momentum estimate that the airburst had an energy range from 3 to 5 megatons of TNT (13 to 21 PJ), and that simply more of this energy was focused downward than would be the case from a nuclear explosion.
Using the 15 megaton nuclear explosion derived estimate is an energy about 1,000 times greater than that of the atomic bomb dropped on Hiroshima, Japan.
It is estimated that the Tunguska explosion knocked down some 80 million trees over an area of 2,150 square kilometres (830 sq mi), and that the shock wave from the blast would have measured 5.0 on the Richter scale. An explosion of this magnitude would be capable of destroying a large metropolitan area but due to the remoteness of the location, no fatalities were documented.
This event has helped to spark Scientists in Siberia to closely monitor mysterious rising mound's as a spate of craters (sink-holes) prompt warnings of spontaneous explosions in the permafrost landscape.
A new expedition by Russia's Trofimuk Institute of Petroleum Geology and Geophysics has set up seismic monitors and surveillance equipment on the remote Yamal Peninsula in Siberia.
They've discovered a mound of soil-covered ice, dubbed a 'pingo', which they believe is set to explode 'at any moment'. 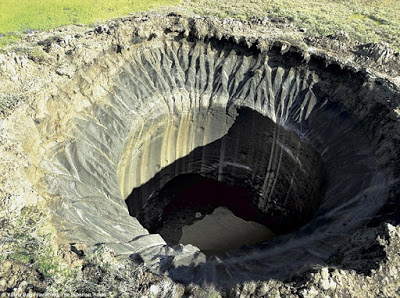 It's potentially bigger, they say, than the 80m wide crater which sparked the whole investigation.
The phenomenon of Siberia's 'hell mouth' craters leapt to public attention in July last year after helicopter footage of the enormous holes circulated on YouTube.
Up to 20 more have since been identified.
Subsequent surveys by scientists have established the craters are linked to underground methane ponds which appear to be warming - and releasing gas - due to rising temperatures.
The Siberian Times reports investigators are now warning the escaping methane now poses a threat to "towns and cities in the extreme north, and natural gas exploration facilities".
Dr Igor Yeltsov, deputy director of the institute, is quoted highlighting the proximity of several Yamal holes to natural gas pipelines and infrastructure.
Just what is "escaping" these"Pingo's" is yet to be revealed but do stay tuned

OUT OF MIND » CHANGING ENVIRONMENT & NATURE » EARTH CHANGES » The Opening of the Abyss: Siberia's 'hell mouth' craters opening up 107 years after Tunguska event