Today at 1:55 pm by PurpleSkyz

Today at 1:01 pm by PurpleSkyz

Yesterday at 11:11 pm by Consciousness Of Economic

Yesterday at 11:08 pm by Consciousness Of Economic

Yesterday at 1:55 pm by PurpleSkyz 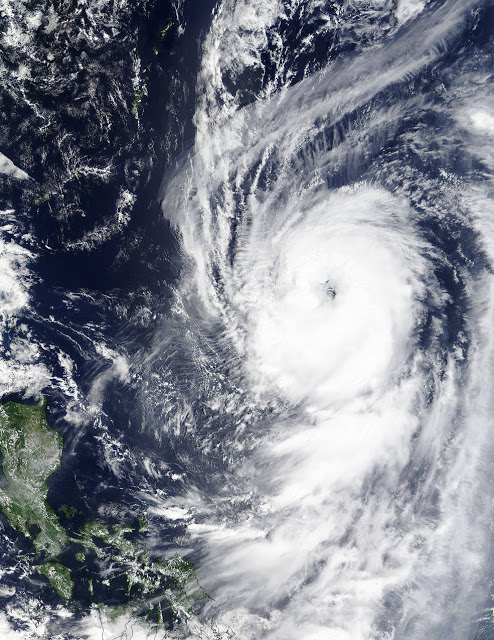 NASA's Terra satellite passed over Dujuan on Sept. 24 at 10:15 p.m. EDT and the MODIS instrument took a visible picture of the storm. Dujuan's eye had become visible from space. Credits: NASA Goddard MODIS Rapid Response Team
"Super typhoon" Dujuan was swirling towards Taiwan Monday with thousands of people evacuated from outlying islands as the storm gathered strength on its approach.

Satellite Loop of Typhoon Dujuan (Image/NOAA)
Torrential rains and high winds are predicted across Taiwan from Monday afternoon as Dujuan nears the east coast, with landfall predicted around 11:00 pm (1500 GMT).
Taiwan's weather bureau upgraded Dujuan to a "strong typhoon" Sunday -- it's top category.
Other regional weather bureaus, including the Hong Kong Observatory, categorised it as a "super typhoon" as it intensified to reach gusts of 227 kilometres (141 miles) per hour.
"It is due to exert influence from noon after its edge reaches the island," an official at the Central Weather Bureau said.
"The whole of the island should heighten vigilance against severe winds and torrential rains."
Almost 3,000 people, most of them tourists, were evacuated Sunday from Taiwan's Green Island and Orchid Island -- popular with visitors.
Authorities said Monday they were planning more possible evacuations as they assessed the impact of heavy rains.
Taiwan's aboriginal mountain communities are particularly at risk during typhoons, often hit by flooding and mudslides.
Some are still cleaning up after Typhoon Soudelor left a trail of destruction last month.
"A massive amount of rubble caused by the last typhoon is still seen on slopes and river beds.
This may cause further damage," the weather bureau said.
More than 24,000 troops are on standby for disaster relief and evacuations, with 100 shelters set up. Emergency response centres have been established in the north and east. Dujuan was 270 kilometres off the coast of eastern Hualien County at 7:00 am Monday.
(2300 GMT Sunday).
The storm threatens long-weekend plans for many as Taiwan celebrates the Mid-Autumn Festival.
A concert by US rock band Bon Jovi due to take place in Taipei Monday was cancelled.
High speed rail was due to be suspended mid-afternoon.
Ferry services to outlying islands have already been suspended and flights to and from the islands will stop from noon.
Dujuan will pass near the Japanese island of Ishigaki as it approaches Taiwan.
Japan's meteorological agency has warned it could trigger waves 13 metres (42 feet) high.
The storm is on course to hit mainland China from Tuesday, but is forecast to have weakened.
So far there have been no reports of damage or injuries in connection with the typhoon.
Typhoon Soudelor caused at least eight deaths in Taiwan last month as it flooded rivers, ripped up trees, and triggered landslides.
Toppled trees and signboards damaged electricity lines, knocking out power to a record 4.3 million households. It went on to kill 21 people in China.