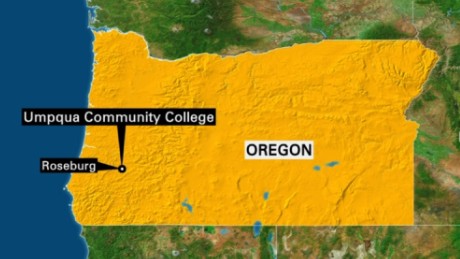 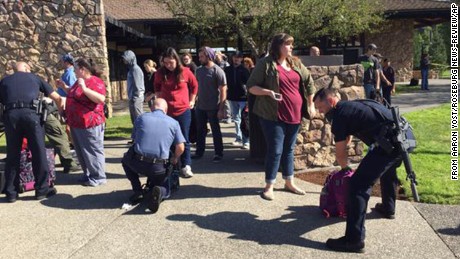 he 26-year-old man that left 10 people dead and seven others wounded in a mass shooting at Umpqua Community College in Oregon was identified on Thursday night as Chris Harper Mercer, NBC News and CBS News reported.
This story has been updated
Douglas County Sheriff John Hanlin did not identify Mercer as the gunman during a press conference on Thursday evening. The shooter died at the scene after exchanging gunfire with authorities.
CBS also reported that four firearms, including a rifle and pistols, were recovered from the scenes. The purported gunman was originally described as being 20 years old by Gov. Kate Brown during a statement earlier in the day.
Update, 9:49 p.m. EST: The Daily Beast reported that a MySpace profile registered under the name Chris Harper Mercer is listed as being in Torrance, California. However, Mercer and his mother reportedly moved to Winchester, Oregon, about four miles away from the Umpqua campus in Roseburg.
Mercer’s page also contained several photos promoting the Irish Republican Army, as seen below:

Heavy.com also posted a screenshot from a dating site profile attributed to Mercer, in which he describes himself as “not religious, but spiritual” and as a Republican. That image can be seen below:

The shooter at Umpqua Community College in Oregon on Thursday ordered students in a classroom to state what their religion was before he opened fire, reports NR Today.
A 20-year-old man opened fire on the campus at 10:38 a.m. Wednesday in Snyder hall. Kortney Moore was in a writing class when a shot came through the window. Her teacher was shot in the head. The shooter came inside and told people to get on the ground. He then told people to get up and state their religion, and opened fire, the local paper reports.
READ MORE:
Umpqua College terrorist identified as 26-year-old Chris Harper Mercer: report
Less than 90 minutes after Oregon shooting, CNN analyst suggests school’s ‘gun free zone’ to blame
The Oregon attorney general said that a total of 13 people were killed and 20 were wounded.
The shooter, identified only as a 20-year-old male at this time, is dead. In 911 audio of the emergency dispatch, officers can be heard trading gunfire with the shooter, then saying the shooter is “down” before ambulances arrived on scene.
Another witness, Brady Winder, 23, was in the room next door. He told NR Today he heard a loud thud in the classroom next door then a volley of gunfire. He then and saw students flee out the door “like ants,” screaming, “Get out!”
Another witness, Kendra Gordon, told Fox News that she was sitting in class when she heard a gunshot, but students didn’t initially know what the noise was. A girl went out to check and was shot twice, Gordon said.
“I was sitting in class when we had first heard the shot. And we didn’t think it was a gunshot, we thought it was a firecracker. And then we heard another one,” she told Fox. “And so, one of the students in my class, she went out and checked it. She got shot twice, one in the arm, and in the stomach. And she came back and told us to lock the door, shut the lights off. And we sat there for 20 minutes waiting for police to show up. It felt like forever.”
Gordon said she heard “tons” of rounds go off. Her classmate, who was shot, was having trouble breathing by the time authorities arrived and she was taken to the hospital.
“For him to just stay in that classroom and shoot so much, it’s just beyond me why anyone would want to do that,” she said, adding that students “called the cops and we called our families and we prayed — prayed that we weren’t going to be next.”
Watch a livestream from Fox12 here.