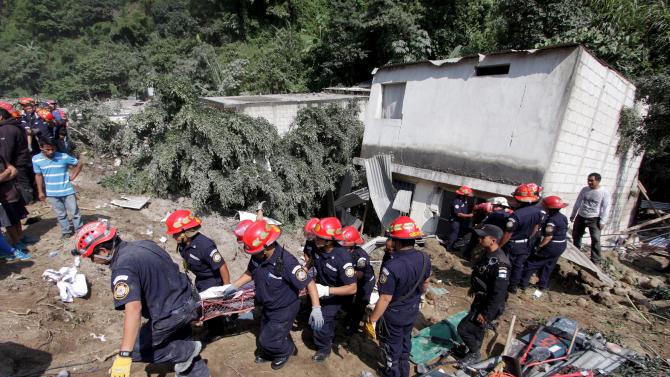 Rescue team members carry the body of a landslide victim in Santa Catarina Pinula, on the outskirts of Guatemala City, October 2, 2015. Hundreds of rescue workers dug through sludge and rock on Friday looking for survivors of a massive mudslide in Guatemala that killed at least nine people and left as many as 600 missing, burying homes in a town on the edge of the capital. Heavy rains swept a torrent of boulders and mud over dozens of homes on Thursday night in Santa Catarina Pinula on the southeastern flank of Guatemala City, one of the worst mudslides to hit the poor Central American country in recent memory. REUTERS/Josue Decavele TPX IMAGES OF THE DAY 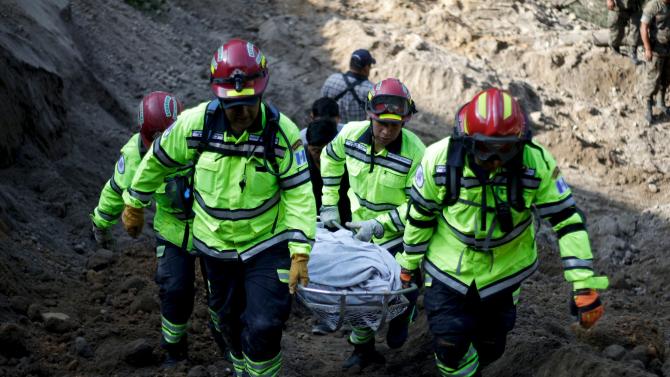 A huge landslide, triggered by heavy downpours, collapsed onto Santa Catarina Pinula town, Guatemala on October 2, 2015. 30 people have been reported dead so far, and hundreds have gone missing. Rescue teams are actively sweeping the grounds in search of survivors.
Heavy rainfall on the evening of October 2 are thought to have triggered the landslide by sweeping boulders and mud over a number of houses in the town, media reports.


Video credit: Prensa Libre tv
About 125 homes have been devastated, leading to an estimate of about 600 people missing, according to Alejandro Maldonado, head of Guatemalan disaster agency CONRED.
Part of Santa Catarina Pinula town was completely covered by a large pile of mud, earth and debris. 25 people have been reported injured while 34 have been pulled out alive from the mud.

Video credit: wochit Latin America
A number of rescue workers were out in field until late night, searching the area looking for survivors and recovering bodies under piles of debris.
The landslide was among the worst ones in the recent history of landslides in Guatemala, and can, by its severity be compared to a landslide in southwestern Guatemala from October 2005, that completely buried the Panabaj village. Hundreds of people have died on the occasion and, unfortunately, a large number of bodies have never been recovered.
Featured image: Massive landslide in Guatemala, October 2, 2015. Image credit: Prensa Libre tv

Posted on October 4, 2015 by The Extinction Protocol

October 2015 – GUATEMALA – Hope is all but gone Sunday that any survivors will be found from the massive landslide on the outskirts of Guatemala’s capital. The death toll has risen to 86 and is expected to continue to rise as emergency crews dig through tons of earth for an estimated 350 missing people. Distraught relatives of the victims shoveled alongside diggers through the mounds of earth that destroyed homes in Santa Catarina Pinula on the southeastern flank of Guatemala City after Thursday night’s collapse of a hillside. Every batch of earth turned up by the diggers held more personal belongings, from mattresses and books to toys and Christmas decorations.
Clutching photos of loved ones, family members stood in line outside a makeshift morgue near the excavation site, some of them crying, to see if they recognized any corpses. “This is the worst thing that has happened to us,” said one woman who was waiting for news about 21 missing family members. Authorities said about 125 homes were destroyed or damaged Thursday night by the sudden landslide after heavy rain. “I went on an errand for my mother and when I returned there was nothing,” 17-year-old Carlos Ac told the French news agency AFP. His mother and seven siblings are still missing. The landslide struck the village of El Cambray II, in the municipality of Santa Catarina Pinula, about 15 kilometers east of the capital, Guatemala City.
Loosened by rain, tons of earth, rock and trees had cascaded onto a neighborhood of El Cambray II near the bottom of a ravine, flattening houses and trapping residents who had gone home for the night. Some houses were buried under about 15 meters (50 feet) of earth, and Guatemalan disaster agency Conred said it doubted any other survivors would be found. “Hope is the last think you lose, so we hope to find someone alive,” said Defense Minister Williams Mansilla, though he also acknowledged the likelihood was very low. Due to the unstable terrain and wet weather, volunteers would no longer be allowed to assist on Sunday. President Alejandro Maldonado said several countries, including the United States and Cuba, have offered to help. –VOA