Did New Horizons photographed a shuttle-like spacecraft and buildings on Pluto’s largest moon Charon that make up a base of unknown origin?

NASA’s New Horizons spacecraft has returned the best color and the highest resolution images yet of Pluto’s largest moon, Charon – and these pictures show a surprisingly complex and violent history.

At half the diameter of Pluto, Charon is the largest satellite relative to its planet in the solar system. Many New Horizons scientists expected Charon to be a monotonous, crater-battered world; instead, they’re finding a landscape covered with mountains, canyons, landslides, surface-color variations and more.

Buildings / Rectangular structures and a Space shuttle-like craft on Charon? 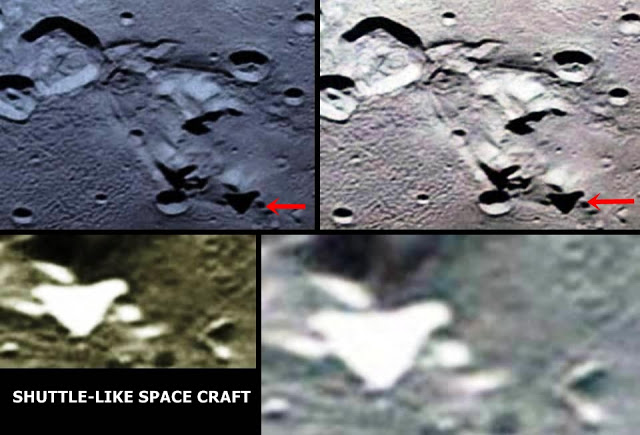 “We thought the probability of seeing such interesting features on this satellite of a world at the far edge of our solar system was low,” said Ross Beyer, an affiliate of the New Horizons Geology, Geophysics and Imaging (GGI) team from the SETI Institute and NASA Ames Research Center in Mountain View, California, “but I couldn't be more delighted with what we see." High-resolution images of the Pluto-facing hemisphere of Charon, taken by New Horizons as the spacecraft sped through the Pluto system on July 14 and transmitted to Earth on Sept. 21, reveal details of a belt of fractures and canyons just north of the moon’s equator. This great canyon system stretches more than 1,000 miles (1,600 kilometers) across the entire face of Charon and likely around onto Charon’s far side. Four times as long as the Grand Canyon, and twice as deep in places, these faults and canyons indicate a titanic geological upheaval in Charon’s past.

“It looks like the entire crust of Charon has been split open,” said John Spencer, deputy lead for GGI at the Southwest Research Institute in Boulder, Colorado. “With respect to its size relative to Charon, this feature is much like the vast Valles Marineris canyon system on Mars.”

One possibility for the smooth surface is a kind of cold volcanic activity, called cryovolcanism. “The team is discussing the possibility that an internal water ocean could have frozen long ago, and the resulting volume change could have led to Charon cracking open, allowing water-based lavas to reach the surface at that time,” said Paul Schenk, a New Horizons team member from the Lunar and Planetary Institute in Houston.

The New Horizons spacecraft is currently 3.1 billion miles (5 billion kilometers) from Earth, with all systems healthy and operating normally.

Images from NASA's New Horizons spacecraft were used to create the flyover video below of Pluto's largest moon, Charon.

The “flight” starts with the informally named Mordor (dark) region near Charon’s north pole. The camera then moves south to a vast chasm, descending from 1,100 miles (1,800 kilometers) to just 40 miles (60 kilometers) above the surface to fly through the canyon system.

From there it’s a turn to the south to view the plains and "moat mountain," informally named Kubrick Mons, a prominent peak surrounded by a topographic depression.