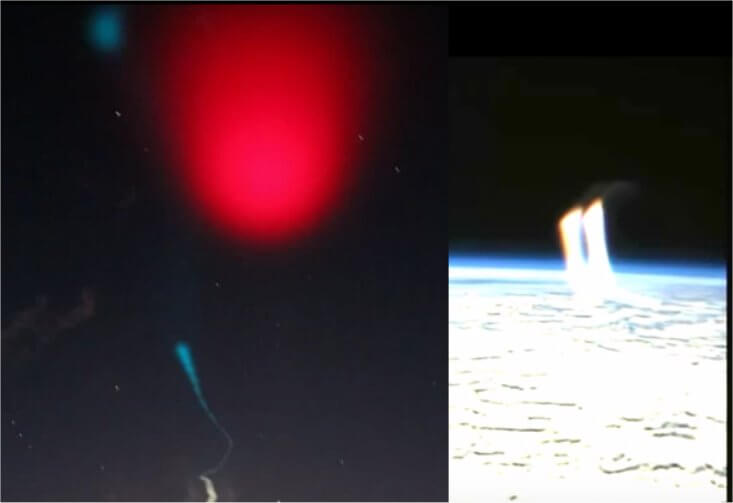 By Gregg Prescott, M.S., In5D.com, October 9, 2015
In recent news, we have seen a number of unexplained beams of light reports from all around the planet. In a related story, an unexplained beam of light was recently spotted emanating from the International Space Station towards Earth.

The footage, spotted by YouTube user StreetCap1, shows two beams of light directed towards Earth from what seems to be an alien ship. The footage doesn’t last long as NASA cuts out the live video feed abruptly. There is no explanation from NASA and we don’t expect to receive any either as this is not the first time such a sighting has been made.
Dubbing this sighting as a rather ‘cool catch’, Scott Waring of UFO Sightings Daily notes that the sun is causing a part of the UFO to be visible. “This looks like a craft in space and is partly cloaked”, he added.

This past week, NASA has been experimenting with new technology that includes releasing colorful vapor tracers 130 miles above the Earth:

My hunch is that those in power, along with those at NASA, know something incredibly positive is about to happen to our planet and it’s scaring those in power because they know that this “event” will relinquish their control over us, once and for all.  In my opinion, it has a lot to do with either gaining new abilities through spontaneous evolution or has something to do with one of the numerous “Cosmic Wildcards” I have written about.
The Hopi have said, “We are the ones we have been waiting for.”  I agree, but I think a positive event will help to cleanse the planet and/or the population of the negative influences on it before we become the ones we have been waiting for.
What are your thoughts?  Please comment below!
Click here for more articles by Gregg Prescott!
About the Author:

Gregg Prescott, M.S. is the founder and editor of In5D and BodyMindSoulSpirit. He hosts a weekly spiritual show on In5D Radio and promotes spiritual, metaphysical and esoteric conferences in the United States through In5dEvents. His love and faith for humanity motivates him to work relentlessly in humanity’s best interests 12-15+ hours a day, 365 days a year. Please like and follow In5D on Facebook as well as BodyMindSoulSpirit on Facebook!