OUT OF MIND » MEMBER ADVERTISING & BLOG FORUMS » VATIC PROJECT » Have the Illums infiltrated the Vatican??? It appears so, just Listen to This Pope

Have the Illums infiltrated the Vatican??? It appears so, just Listen to This Pope

Have the Illums infiltrated the Vatican??? It appears so, just Listen to This Pope

at 02:30 Posted by Vatic Master
Vatic Note:  Notice, the Pope thanks "Congress" (controlled by the Khazars) for the "INVITATION" to speak.  So why?  I am sure he did not give what would be a normal address of a religious figure, because he was probably told NOT TO mention God or to pray.   The Khazars are Satanist and would not want God invoked.  If Pope francis is a plant of the Khazars, which  may well be the case, then, of course, he will not invoke God or Jesus.

It is clearly in the protocols linked on this site off to the right, that the khazars intend to blame the vatican and freemasonry for all the khazars do to achieve domination over this world and its population.   In fact, they intend to do away with Christianity altogether and thus RELIGIOUS FREEDOM.

Its in the Noahide Laws of the Khazars that mentioning Christ is a "crime" and punishable by "DECAPITATION". Bush Sr signed the resolution that removed the American legal system from the 10 commandments, to the Noahide laws.

That was how I knew that those decapitating Syrian Christians were not Jewish, Muslim or anything, other than Khazars calling themselves Jews.  They are tired of the global rule that says "acts that harm others are a crime and punishable by a prison term."

Well, they infiltrated both Catholic Church and Freemasonry,  similar to their infiltration of all first world top level governments and military, so this could very well be true, but lets keep our eye on WHO THE REAL PERPS ARE and not their deceptive fronts that they control.

If we go after anyone it should be the international khazar bankers and Their conspiracy partners who are traitors to our various nations, and no one else. No third world war.

In an ironic twist. he left out the fact that the Vatican is the world’s richest corporation and has incalculable riches within it’s vaults.

In an ironic twist. he left out the fact that the Vatican is the world’s richest corporation and has incalculable riches within it’s vaults.

Pope Francis speaking before Congress this morning did something highly unusual for a “man of God”, he didn’t open up in prayer. He did not invoke God in any way, shape or form. Instead, he jumped right into preaching the Laodicean gospel of social justice.

What a phenomenal opportunity to bring Jesus Christ to the spotlight as the entire free world was watching! But no, Jesus never even got an ‘honorable mention” from the “vicar of Christ“. Wow. I preached in church this past Sunday, and we wouldn’t even begin until we had prayed and asked for the Lord’s blessing.

How much more should the Pope have done this? Take a look at the photo below and see the Pope starting his remarks by giving the Satanic Illuminati “OK” sign, and you’ll know why he didn’t bother to pray to God before speaking, he was already talking with his god. And you wonder why we call him the False Prophet? 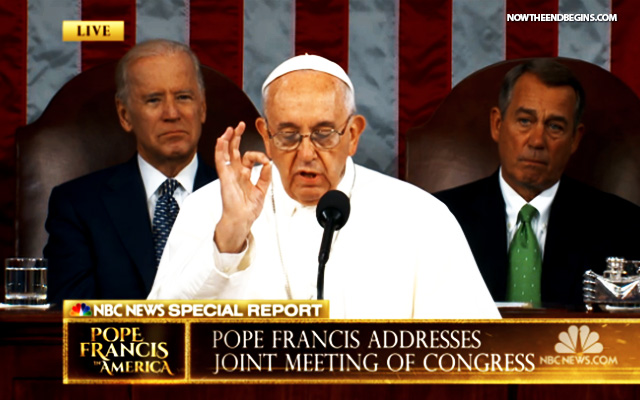 In Satanism, when making this sign the three fingers not used to make the circle are considered symbolic of the unholy trinity — horned God, Goddess, and offspring (antichrist). The bent three fingers are shaped as three number six’s, or 666. Thus, we have 666, the sun deity (Lucifer), the Goddess (Mystery, Babylon the Great, Mother of Harlots), and the beast (antichrist, 666), all in one unitary hand sign.

After that stunning spiritual flop, Pope Francis then spoke about how much he wished to “enter into a dialogue” with the American people. This is where the rambling started, and the audience in attendance began to grow confused, not sure where to applaud or even if to applaud. At the 15:00 mark, he began to talk about out of control capitalism, and the evils of money. In an ironic twist. he left out the fact that the Vatican is the world’s richest corporation and has incalculable riches within it’s vaults.

No God, no Jesus, and certainly a spirit but not the Holy Spirit, Francis delivers a politician’s speech on social justice, illegal immigration and the evils of wealth.
(VIDEO)

At the 24:00 mark, he started promoting illegal immigration, and chastising America for not letting more illegals in over our borders. He called it a sin to not allow more illegals in, and that we should “reject a mindset of hostility” towards them. What part of the word “illegal” does the Pope not grasp? At this point he invoked the “golden rule” and got the obligatory standing ovation. It’s now the 30:00 mark, and I am still semi-patiently waiting for the “vicar of Christ” to give Jesus a shout out. Crickets, nothing but crickets.

“And the woman was arrayed in purple and scarlet colour, and decked with gold and precious stones and pearls, having a golden cup in her hand full of abominations and filthiness of her fornication: And upon her forehead was a name written, MYSTERY, BABYLON THE GREAT, THE MOTHER OF HARLOTS AND ABOMINATIONS OF THE EARTH.” Revelation 17:4,5 (KJV)

Pope Francis make a fogged reference to the Catholic church priest sex scandals, and spent nearly 23 seconds talking about it. He said there should be “hope, forgiveness and rehabilitation” for the gay pedophile bishops who committed decades of vile sex crimes.

He said NOTHING to the victims and their families. Not one word. The message the Pope sent is that the Catholic church has no desire to do one bit more than the law will force them to do. If I was a Catholic, at this point and for this reason alone, I would instantly abandon the wicked Vatican institution known as the Catholic church.

Shameful and disgusting. Francis talks incessantly about “healing the world”, and he won’t even help to heal the victims that his own church created. Spoken like the lying, hypocritical False Prophet that he is.

At the 51:00 mark, Francis again invoked the memories of Abraham Lincoln and Martin Luther King, Jr. in an ongoing bid to call America to social justice. Still no references to God, Jesus Christ or to the Holy Spirit. The 4 Iranian hostages with one of them being a Christian pastor? Not a word. I guess they don’t count. He then closed his “sermon” by saying “God bless America”. Finally, the “vicar of Christ” mentioned God. Ugh.

America, behold your False Prophet. Please step up and take the Mark.

“Hey, folks, I just had this pointed out to me. Somebody sent me a website called Now the End Begins. (interruption) Yes, I’ve got the Rich Lowry sound bite coming up. And it’s all beneath the dignity of this program, but I’m gonna play it. I’ve got it. I got all that Trump stuff coming up. Yeah, just hang in there, be tough.

Anyway, this website, Now the End Begins. Yeah, NowtheEndBegins.com. The pope never once invoked God. Never once. Did not open or close in prayer. And the website also mentions something else that we all heard. It registered when I heard it a number of times, but I didn’t think to make a note of it. The pope repeatedly said he wanted to enter into dialogue with the American people.

Thanks, Rush, for helping us get the word out. We appreciate it.

Related in this Category

OUT OF MIND » MEMBER ADVERTISING & BLOG FORUMS » VATIC PROJECT » Have the Illums infiltrated the Vatican??? It appears so, just Listen to This Pope