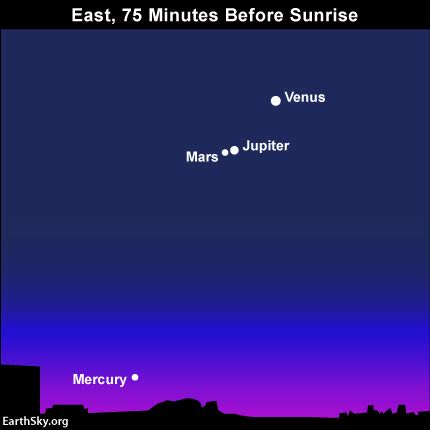 
On Saturday morning – October 17, 2015 – Mars and Jupiter had their closest conjunction until the year 2018, in the dawn sky. Tonight’s moon is still near Saturn (see chart below). These events are fun, but here’s the good news. Throughout October, 2015, you can see all five visible planets somewhere in the night sky.
In their order going outward from the sun, the five visible planets are Mercury, Venus, Mars, Jupiter and Saturn. By visible planet, we mean any solar system planet that’s easy to see with the eye alone, and which has been observed by our ancestors since time immemorial.
The great things this month is … you don’t need to stay up all hours of the night to view the five planets. Follow the links below to learn more.
Saturn is the lone planet up in the evening.
Venus, Jupiter, Mars and Mercury are up at dawn.
When will all five visible planets appear simultaneously? 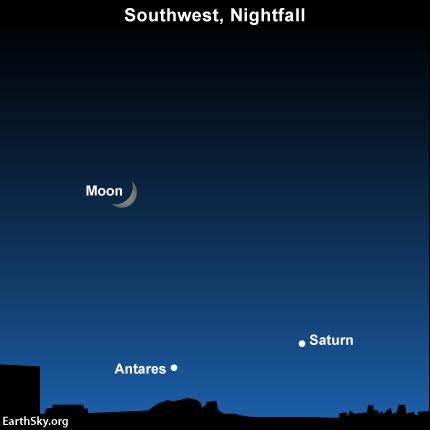 Use the waxing crescent moon to locate the lone evening planet, Saturn, and the ruddy star Antares on Saturday night, October 17.
Saturn is the lone planet up in the evening. Throughout October 2015, the golden planet Saturn has been popping into view at nightfall. At northerly latitudes, Saturn sets at early evening in early October and as night is falling by the month’s end. From the Southern Hemisphere, Saturn stays out a bit later, setting at mid-to-late evening in early October and early evening in late October.
On the night of October 17, you can see Saturn near the moon (see chart above). Just don’t mistake it for a nearby bright star, Antares in the constellation Scorpius. Antares is redder in color, and twinkles more furiously, than Saturn.
From all around the world, Saturn is sinking toward the glare of sunset all month long. That’s happening because Earth is zooming ahead of Saturn in the race of the planets around the sun. Soon, the sun will come between us and the ringed planet.
Saturn will disappear from the evening sky in November 2015 and will reappear in the morning sky in December 2015. The star Regulus rises first, followed by Venus and then by two planets in conjunction (Mars and Jupiter). Mercury comes up when darkness first gives way to dawn. The green line depicts the ecliptic – the Earth’s orbital plane projected onto the constellations of the Zodiac.
Venus, Jupiter, Mars and Mercury are up at dawn. On any morning in October, get up just as darkness is giving way to dawn (starting around 90 minutes before sunrise) to view Venus, Jupiter, Mars and Mercury.
It’ll be possible – in some cases, easy – to see all of these worlds from most parts of Earth. Mars and Mercury are the least conspicuous of the five planets now, with Mercury the hardest planet to catch, especially from temperate latitudes in Southern Hemisphere. Luckily, you can let the super-brilliant planets Venus and Jupiter guide you to Mars and Mercury as darkness is giving way to dawn (about 90 to 60 minutes before sunrise) this month.
Remember, an unobstructed eastern horizon and binoculars always help out in any Mercury search.
If you have a hard time spotting Mars, simply aim binoculars at Jupiter to view Mars and Jupiter occupying the same binocular field. Yet Mars should be in plain view to the eye alone, if you’re up before dawn.
Although Jupiter and Mars are extremely close together on the sky’s dome, these worlds are not close together in space. Mars and Jupiter just happen to reside along the same line of sight, with Mars being the closer of the two. At present, Mars resides about 2.3 astronomical units (AU) from Earth whereas Jupiter lies farther out, at about 6.1 AU. One astronomical unit equals about 150 million kilometers or 93 million miles.
Good luck! A model of the solar system showing the outer planets (Uranus at left), a comet’s orbit, the asteroid belt and the inner planets huddled near the sun. Image via ESO and AstroBob.
Bottom line: All five visible planets can be seen on these October, 2015 nights. Saturn is up in the evening, and Mercury, Venus, Mars and Jupiter are up before dawn. We are indeed curious about how many in the EarthSky community will see all five visible planets on these nights! Let us know in the comments below.