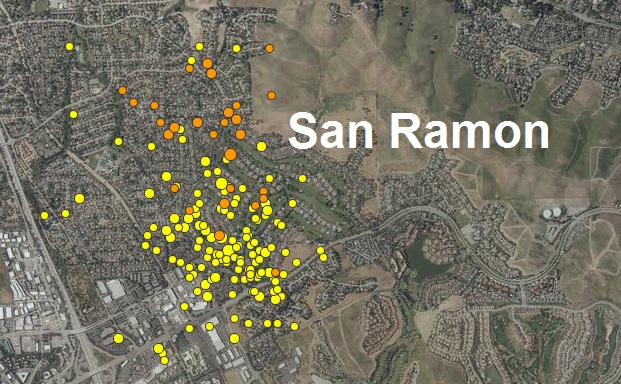 A swarm of earthquakes continued to rock San Ramon in the East Bay. Image from October 19th, 2015 shows the latest quakes in red and earlier quakes in orange and yellow. (USGS)
But is it the prelude to the big one?
Hardly...This month has seen the quietest month for major quakes in many many years.....
If you are all wondering why I have stopped reporting major earthquakes this month well, I haven't, but, there has not been one to report since way back- on September the 26th, (which is a staggering 24 day's) when a mag 6.2 - shook Chile.
Swarms like this are frequent, Nevada, Oklahoma and Alaska all recent victims of similar swarms without the devastating 'Big One!'
Anyway the continuing  swarm of shakers has rattled this city in the last 24 hours.
The small quakes hit San Ramon seconds apart at 4:21 p.m. Monday, according to the United States Geological Survey.
The quakes were felt as far away as Oakland, Walnut Creek and Moraga, where residents reported feeling a strong jolt.
The USGS initially reported two 3.5 earthquakes near San Ramon, but were updated around 5:15 p.m. to a 2.8 and 3.5, said USGS research geophysicist Brad Aagaard.
There were more than 40 shakers in San Ramon within the last 24 hours and 200 since Oct. 13, Aagaard said.
This city and it's neighboring cities are no stranger to swarms of earthquakes.
In 2006, 120 rattlers shook up San Ramon over 31 days, he said.
About 350 shakers hit Alamo over 42 days in 1990, with the highest quake striking at 4.4 magnitude. "They all sort of fall within the San Ramon-Alamo area, along the Calaveras Fault zone," Aagaard said.
USGS crews were working to determine if the recent swarm of shakers were on the Calaveras Fault or other perpendicular faults, he said.
There's no way for researchers to predict when or how the quakes will settle.
"Generally, gradually they become farther and farther apart in time, but sometimes they can stop kind of abruptly," Aagaard said. Danville resident Jennifer Morris was cooking dinner with her two children when the two bigger quakes shook her home, she said.
The rattler was strong enough to shake her refrigerator. With the vivid memory of surviving the Loma Prieta Earthquake in 1989, Morris rushed her kids out of the kitchen.
For her preschooler and second grader, earthquakes have "unfortunately become part of their normal."
"I was alive for Loma Prieta -- was in my teens -- and it felt strong like that," Morris said.
"Maybe not as strong, but stuff moved in my house and my refrigerator rocked back and forth.
It was enough to make me move my children into an open area of the house."
The bevy of rattlers can serve as a reminder for Bay Area residents to check and stock emergency supplies and be ready to "drop, cover and hold on" if they ever are in a quake, he said.
"We don't know when the next large earthquake is going to be, so it's best to be prepared," Aagaard said.
Morris said the slew of shakers reminds her to prepare her family's emergency supplies, but she's not concerned about the possibility of the next big one hitting the Bay Area.